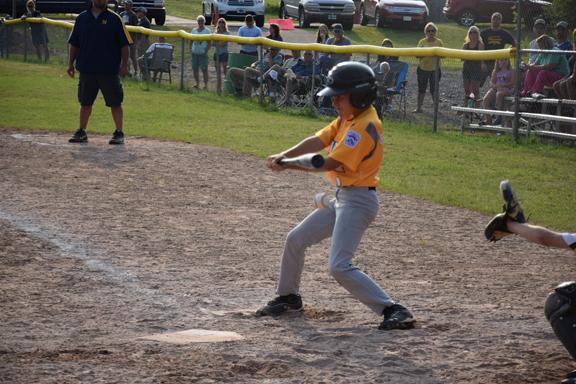 Negaunee's Connor Rajala fouls off a ball in a game against Portage Lake in the finals of the championship bracket in the Little League baseball Minors tournament held in South Range on Tuesday. (Houghton Daily Mining Gazette photo by David Archambeau)

On Tuesday evening, Keweenaw defeated Penokee Range, 12-2, to survive in the consolation bracket, while Portage Lake shut out Negaunee, 9-0, to advance to the championship series.

Keweenaw will face Negaunee at 6 p.m. today with the winner set to face Portage Lake in the championship round starting Thursday.

Whoever faces Portage Lake better be ready as they were red hot in all aspects against Negaunee.

The team put together a no-hit shutout and leading the charge was starting pitcher, Brycyn Nettell. In five innings, he threw 10 strikeouts and allowed only one walk. His partner in crime was Benny Keranen who threw the last inning in relief, striking out two.

“We had the pitching today,” said PL manager Daron Durocher of Nettell’s effort. “He was a last-minute substitution to pitch, and he came threw like none other. He was consistent and made the batters work by varying his speed.”

Durocher added that not only was Nettell on top of his game, but so was the rest of his squad.

“Up and down our lineup, we had production, and that is what it takes. This was a team game,” he said.

In the first inning, Negaunee gave up two walks that turned into two runs.

In the second inning, with two outs, Portage Lake outfielder Brexton Kinnunen walked, shortstop Brody Donnelly got a base hit to left and second baseman Conner Helminen followed with a walk to load the bases. Keranen then stepped up to the plate and smacked a bases-clearing triple to make the score 5-0 after two.

Meanwhile, Portage played excellent defense. They made the routing plays when they were supposed to. Three more runs came in their half of the fourth inning in part from another big hit by Keranen to put the game out of reach for Negaunee.

“It was certainly a different type of game for us,” Negaunee manager Dean Leece said. “On Sunday, everything was going right for us against Penokee Range, but tonight we couldn’t buy a hit and things just got away from us in the field.”

He added though that his squad will give it another shot today against Keweenaw, and he is grateful for that.

In Tuesday’s other game in South Range, Keweenaw mercied Penokee Range in just five innings. It was a back-and forth battle for the first two innings before the game got out of hand.