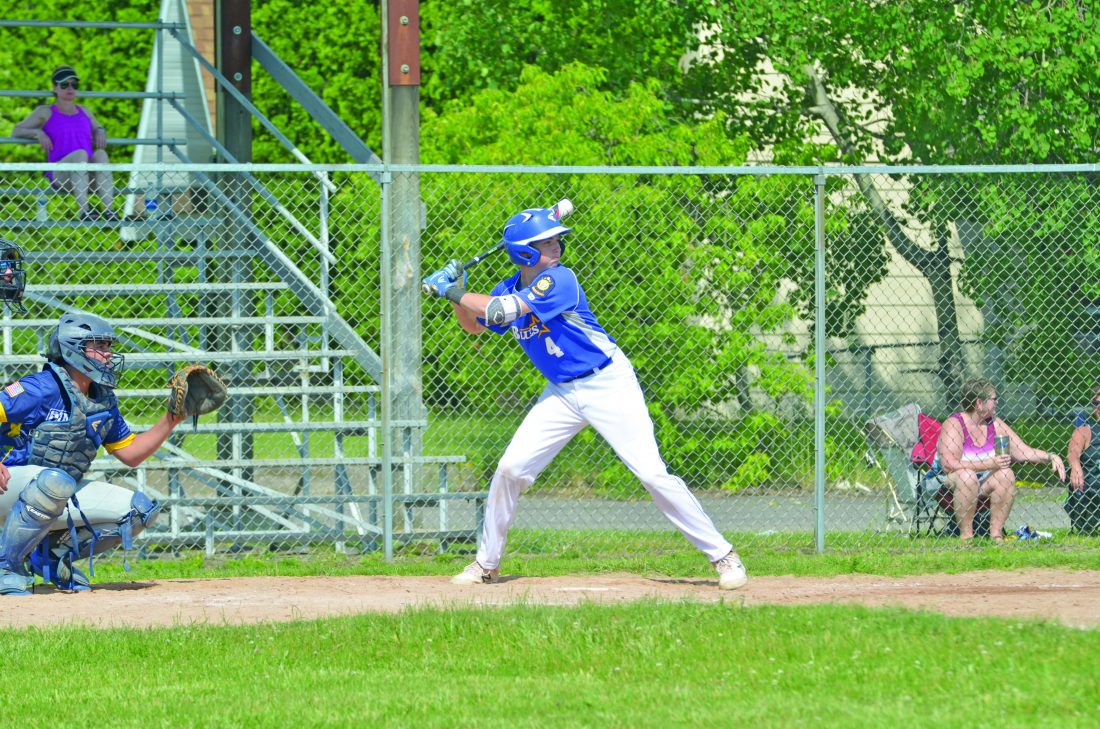 MARQUETTE — There may not have been any fireworks over the outfield fence at Haley Memorial Field on Thursday morning, but the Marquette Blues Legion baseball team had just enough offense in the first inning to pretty much seal the deal for the rest of the game.

A four-run first, combined with a 13-strikeout performance from pitcher Blake Henriksen marched the Blues to a 5-1 victory over the Negaunee Diamonds on Independence Day.

“It feels really nice, especially after we lost to them (2-0) last time,” Henriksen said. “Last time, we lost by a couple of errors. It’s just nice to do good out here and help the team win.”

The Blues improved to 12-10 on the season while the Diamonds dropped to 8-3.

“If we didn’t have that first inning, I think we would’ve obviously had a much better ball game.”

The Diamonds’ lone run came on a passed ball in the top of the fourth inning which allowed Logan Fish to score from third.

In the same inning, the Diamonds loaded the bases with just one out, but were unable to hit anyone home. Jacob Adriano hit into a fielder’s choice with the bases juiced, but the Blues opted for the force at home, nabbing Kennan Johnson for the second out and keeping Negaunee with the goose egg at the time.

A.J. Suardini struck out after Fish scored on the passed ball to end the inning.

“One out with the bases loaded in the middle of our order and we just couldn’t get anything in,” Siik said. “We’ve got to capitalize on those runners on scoring position and we didn’t do that (today).”

Blues manager Derek Swajanen said his team has improved since first facing Negaunee on June 18, and the four-run first inning was very helpful in keeping the Diamonds at bay for the rest of the morning.

“We’ve been going to these tournaments, we’re building and getting better and better,” he said. “It was nice to get four up in the first inning and then to know we had Blake (on the mound).

“We got a little lackadaisical there in the middle innings. We had chances there in the fifth and sixth and got one out of it. We did a nice job.”

“He’s a top-notch pitcher,” he said. “He’ll go somewhere next year and play college ball. He does a nice job keeping the ball down and getting the strikeouts when we need it.

“The defense also did a nice job. We only had maybe one or two errors, but as long as we can keep it under two errors per game with good pitching and timely hitting, we’ve been pretty successful.”

The Blues offense got started in the first with a one-out infield single from Jakob Peterson, who had the speed to beat out the throw to first.

Diamonds pitcher Eric Johnson committed a walk to Henriksen right after that, and both runners advanced to second and third on a passed ball.

That’s when Holden Shaneberger knocked a single to left to score Peterson and Henriksen making it 2-0.

After Shaneberger moved to second on the throw home, and then to third on another passed ball, Johnson allowed another walk to Hogan Nemetz, who eventually stole second, putting runners on second and third again.

Kyle Frusti stepped up and hit a single to center to score Shaneberger and Nemetz and make it 4-0.

The Blues added one more run in the fifth when Peter VandenAvond stole third base, and advanced to home on an overthrow.

The Blues and Diamonds finished with five hits apiece. Negaunee had two errors to Marquette’s one.

Jacob Ennett and Adriano were each 2 for 3 for the Diamonds.

Marquette heads to Antigo, Wisconsin on Saturday for another weekend tournament while Negaunee visits the Copper Country Flames on Saturday at 1 p.m.