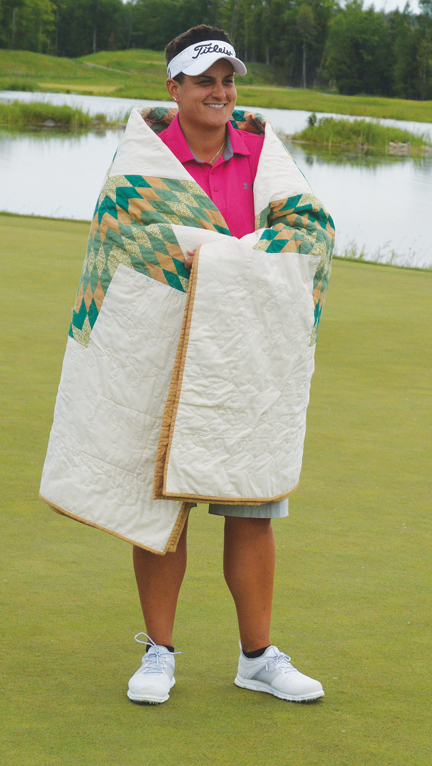 Daniela Iacobelli stands with her Potawatomi blanket for winning the Island Resort championship at Sweetgrass on Sunday in Harris. (Escanaba Daily Press photo by Austin Hemmingson)

HARRIS — Another year of the Island Resort Championship at Sweetgrass Golf Club In Harris has come and gone with Sunday’s final round. The championship, which is part of the ninth annual Symetra Tour, brought in a good crowd of local people excited to see women’s professional golfers aiming to reach the LPGA up close.

“For me, it’s good to come out so I can get my kids out and get out of my side of the golf business and running a course,” Escanaba Country Club manager Jeff Rae said. “I become a spectator, which is why I enjoy coming out. Watching my son and my daughter have fun — that’s what it’s all about. It’s a good time for the family and the community.”

Rae has two children, six-year old son Grayson and four-year old daughter Gabby. Each of them got to meet tournament winner Daniela Iacobelli, among other golfers.

“When you go to the Symetra Tour, or like the web.com — the tournaments before the professional ones — they make it so fan friendly. You can follow them right in the fairway, you can listen to them talking to their caddies,” Rae said.

“I think the coolest part for my son and daughter is the golfers communicate with the fans and engage during tournament play. When you go to a PGA event, they’ve got ropes and you got to stand behind things. I understand there are more people there, but it’s very special here.

“The reason I like coming out for three days is for my kids and being part of the interaction. My son comes out and gets balls signed and gets pictures with all the girls. He just loves it.”

Rae pointed out how nice the course is, and he thinks a lot of the general public isn’t aware of that.

“A lot of us growing up around here have been used to Escanaba and Gladstone and the Highland and the Bluff. This brings a lot of different characteristics to the Midwest that you don’t usually see,” Rae said. “They’re able to make this place look like it’s ran year-round in only a four- of five-month period. That’s what’s very unique about it. It’s immaculate up here, and that’s why it’s so special to come here and watch.”

“It was great. The attendance was up a little bit, the weather was really good and the competition was really good. On all accounts, it was a pretty successful week for us,” he said. “This event isn’t really about the short-term; it’s more about the long-term awareness for the casino and especially the quality of the golf course. We get a lot of advertising time down in the Fox Valley (Wisconsin), which is really our sweet spot for a lot of our patrons.”

Herioux thought attendance from this year was up from recent years.

“The quality of our course is really good, and the more that gets out, the more people will be willing to drive up here to see what we can offer,” he said.

The tournament is under contract for one more year. Herioux says he doesn’t see a need to change too many things to keep the event successful.

“I think the basic model works pretty well. We tinker around the edges with some of the promotions, some of the giveaways, some of the things that we do for the players to kind of augment the experience here. For the most part, the model has worked and we’ll stick with it for the foreseeable future,” he said. “We reached capacity in our sponsor skywalk so we have had some discussions about maybe making that bigger.”