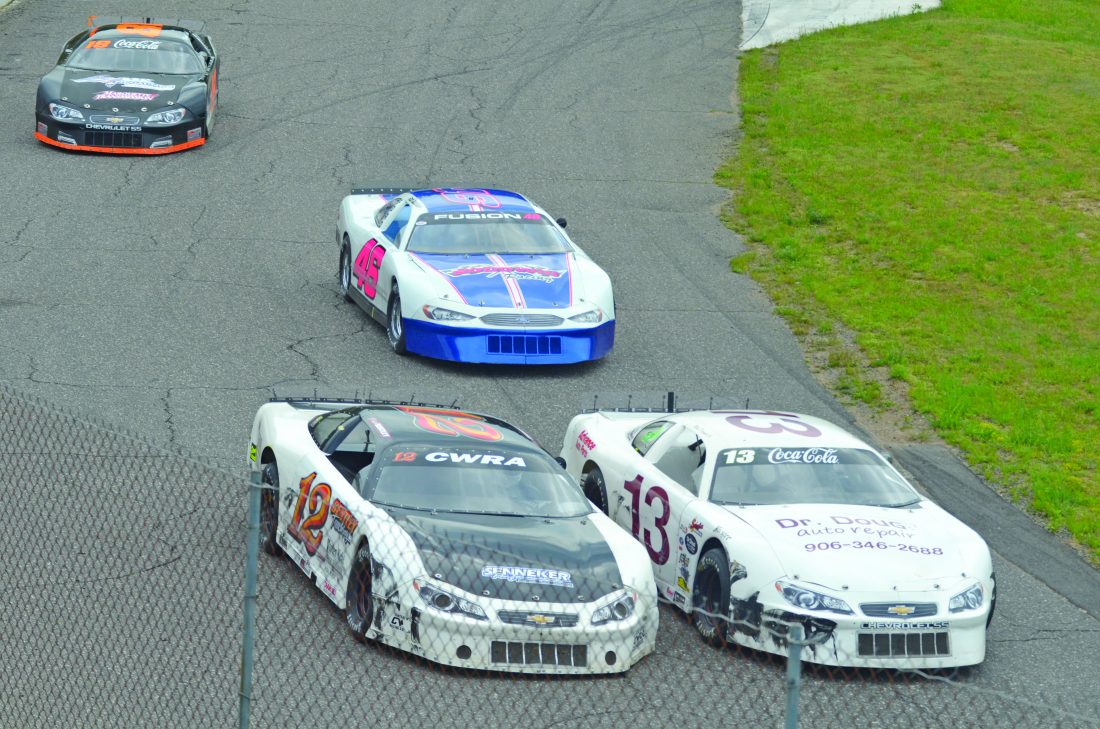 0753: Putch Bentley (No. 12) and Doug Larson (No. 13) battle for the lead while Rob Goodwin (No. 46) and Charlie Bell (back) trail in the late model feature event during Week 2 of racing at Sands Speedway on Sunday afternoon. (Journal photo by Ryan Spitza)

SANDS TOWNSHIP — The precipitation held off just long enough to get a full program and some bonus racing in at Sands Speedway on Sunday afternoon.

The quarter-mile track completed its second week of racing and hosted Veterans Day, honoring military veterans who made their out to the track to enjoy the speed and smells of burning rubber.

Six feature races were ran with two of those being make-up races from Week 1 back on June 9 due to rain cutting the day short.

The rain held off until the very end of the day yesterday however, as fans were treated to some bonus racing.

The most eventful feature of the day was the final race, a 15-lap, four-car battle in the late model class.

Doug Larson took the victory and led flag-to-flag, but not without some chaos throughout.

The first caution of the race came at the tail-end of lap one when Charlie Bell spun out in turn four. After the restart, three of the four cars in the race collided on the frontstretch. Bell was involved yet again, while also collecting Putch Bentley and Rob Goodwin into the mix.

Goodwin’s car experienced problems right off of the restart, forcing him to go to the pits and ending his race.

On the same lap, Bentley wound up losing his right rear tire and spinning on the frontstretch to bring out the third caution. This left Bell and Larson to battle it out the rest of the way.

Because of the lack of cars in the originally scheduled 20-lap event, race officials cut it down to 15 laps.

Bentley eventually came back onto the track and wound up finishing second, but not without a challenge to Larson. Bentley put the bumper to Larson on the final lap, but was unable to get by him as Larson held on for the victory.

Goodwin was the late model points leader going into this weekend with 60, while Bell trailed by one at 59. Larson had 53 points going in while Putch Bentley had 33.

The super stock feature was a cleaner one with Ross Olsen Sr. also leading flag-to-flag to pick up a victory. Olsen battled with Ray Keskimaki throughout the day in the heats and main event, but it was Olsen who came out on top.

“It was really good,” Olsen said. “We made some adjustments with new tires and made the right adjustment pretty well.”

Also running with the super stocks were an experimental class, won by Victoria Hawley in her Ford Mustang.

Wendrick Motorsports also had a couple of heat wins on the day. Adams was in a three-way tie for second place in the modifieds standings going into the weekend with 99 points. He was tied with fellow competitors Ryan Proctor and Reece Cavin.

Todd Maki led the modifieds standings with 104 points going in.

Four-cylinder stocks saw Anthony Karnack earn a win after making a pass for the lead off of turn four on Kathie Waselesky with four laps to go. Karnack was seventh in the standings going into the weekend with 71 points.

Sands Speedway will host the Drive for Diabetes this coming Sunday, with the annual King of the Hill Spectator Fast Lap Challenge also taking place. Fans can bring their regular vehicles onto the track to run a fast lap, free of charge.

Olsen said racing is a tight-knit community, and for those looking to get out of the house on a Sunday, they should come out to the track with an open mind for a family-friendly activity.

“It’s the best group of people for racing and the best sport,” Olsen said. “So come on out.”