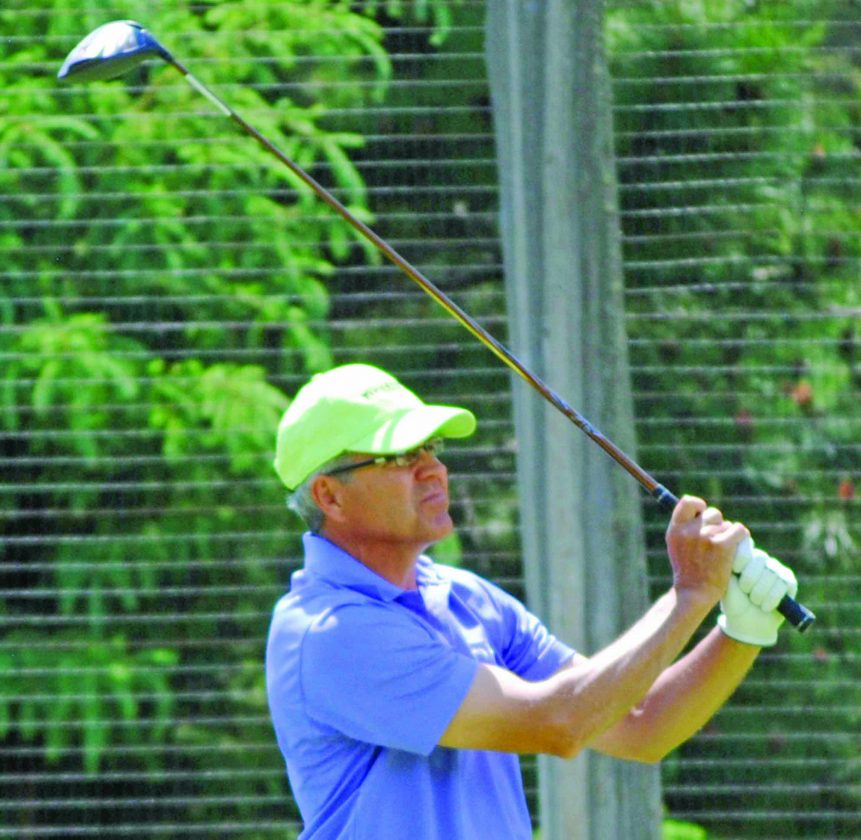 IRON MOUNTAIN — Mark Ray celebrated a birthday Monday and wondered how many opportunities he would have to win the U.P. Senior Championship.

The retired school teacher from Bark River didn’t have to wait long.

Ray and Saari both covered Pine Grove Country Club in 142 strokes over the 36-hole, medal-play tournament. Ray held a one-stroke lead entering the 18th hole Tuesday but Saari answered with a birdie.

“It’s unbelievable,” Ray said after the 15th annual U.P. Golf Association tournament. “I’m 62 now and I don’t have many of these chances left (against some of these younger players).”

Norway’s Mike Solda held a one-shot lead over Saari and two over Ray after Monday’s round. Saari managed a one-shot advantage at the turn on Tuesday.

“All day long we were bunched,” said Saari, noting a one-shot difference for most of the day. “It was a lot of fun playing against these guys, competing all day long, testing yourself.”

“Scott was so good. Mike was so good. Dale was good,” Ray said. “We just fed off of one another. We really didn’t see the pressure until the very end because we were in the moment.”

“I got into a little trouble off the fringe of the green,” Ray said of the par-5 15th hole. “That really got me going when I putted up the hill and it went in. That got us back to even.”

“Because it was getting a little cooler, I decided to hit an easy 8-iron,” Saari said. “I thought it was going in for a second.”

Ray answered with a par on No. 18, posting the low round of the day with a two-under par 70.

“I made a pretty good three-foot par putt on 18,” Ray said. “I had a little putting confidence (going into the playoff).”

On the par-4 No. 1, the opening playoff hole, Saari hit his second shot 30 feet from the pin. His putt just rolled past the hole.

Ray’s approach to the green was from 110 yards away.

“I hit a nice gap wedge and it just got in the right spot,” Ray said of his second shot in setting up the deciding putt for birdie and the championship. “By the grace of God it got below the hole and I had a straight putt.”

Putting all day with a feathery touch, Ray rammed this one in the cup.

“This was my chance,” he said. “Luckily. it went in. I hit it a little too hard.

“I’ve had a pretty soft touch all day. I just accelerated, it was on-line and it went in.”

Observed Saari, “Mark made a great putt, a critical putt. Mark played well today. It was a lot of fun. He’s a good player.”

Solda, bidding to become Dickinson County’s first U.P. Senior champion, saw his hopes dashed with a double-bogey on No. 15. His drive, about 30 yards past Ray and Saari on that hole, wound up near the woods.

“I still had a good chip onto the green,” Solda said. “I just hit it fat and dumped it in the bunker. That was a punch in the gut. You are there all along and no.

Solda posted a 75 Tuesday. The 59-year-old Saari shot one-under 71 for both rounds.

“For the most part, I hit the ball really well,” said Saari, a perennial U.P. Senior runner-up until winning last year. “Two under over two days, I have to be pretty happy with that. I just came up a little bit short today.”

Ray’s golf game wasn’t in good shape during the spring but he gained some confidence with a solid round Sunday in the U.P. Best Ball at Pine Grove.

“It was a great day and I had wonderful guys to golf with,” Ray said. “To be honest, it would have been a great day even (finishing) at second. I don’t think I can play any better than I did.”