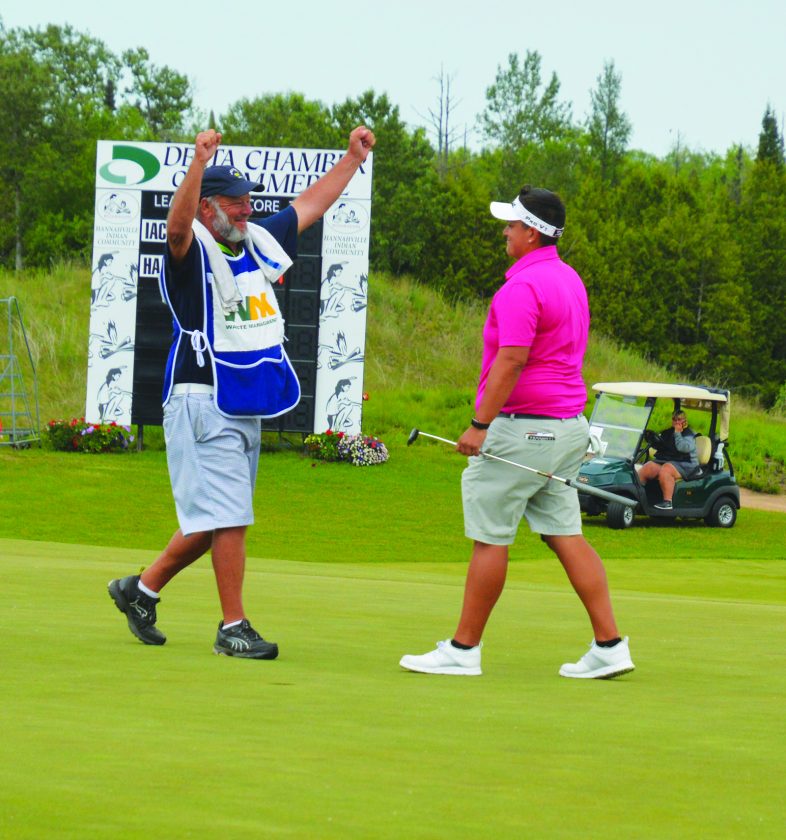 HARRIS — The Island Resort Championship at Sweetgrass Golf Club ended in a very fitting way here Sunday. After three days of little to no separation at the top, Daniela Iacobelli and Cindy Ha both finished at minus-11, setting up a tiebreaker on hole 18.

Iacobelli put herself in great position to birdie with a shot set up just three feet from the hole.

After Ha missed a birdie attempt from 15 feet and finished at even par, Iacobelli had a chance to take home the championship with a simple three-foot putt.

Caddy Paul Schrader erupted with emotion as he and Iacobelli shared a hug in front of an applauding crowd.

“The heart rate was pumping and my nerves were going, but I guess in the end that’s kind of how you want to do it,” Iacobelli said. “We just went for it, but it was definitely kind of nerve-wracking.”

It wasn’t an easy climb to the top for the Melbourne, Florida native, who began the day six strokes back and tied for 13th. She shot a bogey-free, 7-under par final round of 65 to put herself in position to win, claiming the pressure didn’t get to her.

“Normally I’m not a leaderboard watcher, but today I kind of was,” Iacobelli admitted. “When i got off hole 15, I told my caddy I think 12 will do it. He told me I needed to close with 11 for a chance, and I gave myself decent chances on 16, 17 and 18 before I converted on 18. It’s nice to look back and know where you were and know what you had to do, and you pretty much did it. Hopefully, I can build on that and the confidence will help for the rest of the year.”

It was Iacobelli’s third career Symetra Tour victory, with her last two coming in 2012 and 2015. The victory is rewarding in more ways than one, as she qualified for the Evian Championship on the LPGA Tour in France later this month, won 500 Potawatomi Cup points, captured a Potawatomi blanket and a $30,000 check.

“It’s awesome,” she said. “I’ve never been to France. I’ve played in a couple majors but I’ve never played there. Everyone tells me how beautiful it is and they’ve shown me a couple pictures.”

With her win, Iacobelli also jumps to No. 8 in the Volvik Race for the Card with $45,388 total season earnings.

After being a stroke or two behind for most of the day, Ha, who also qualified for the Evian Championship, closed strong with a birdie on hole 18 to force the playoff.

“Honestly, it was a really good week of golf and I can’t really complain,” Ha, a native of Demarest N.J., said. “I mean it stinks to lose, but there is a silver lining going to the Evian Championship. There’s a lot of positives to run off and there’s still the rest of the season to go. I just got to try to take this momentum and this type of golf throughout the rest of the season.”

In most ways, the weather wasn’t a factor as much as it could’ve been. Rain that was originally projected in the forecast held off, but the wind still played a role.

“This whole week started off really calm. I had a morning tee time Friday and it wasn’t blowing until the last couple holes of my round,” Ha said. “Then in the afternoon the wind picked up. It’s so exposed here. It’s always tougher with the wind, but it’s such a good golf course so you have to embrace all the factors.”

Both players had to wait it out for roughly a half-hour as third-place finisher Louise Stahle of Sweden remained in striking distance until the very end. Stahle just missed a 10-foot birdie putt on the final hole that would have resulted in a three-way tie at the top. She began the day as the leader at minus-10.

“I hit a good drive, but it was just two yards too far in the rough,” Stahle said about her last hole. “I hit a pretty good wedge and the putt just broke a little more than I thought it would. It was just a tough line. I saw it go left and right, so I really didn’t know which way to hit it.

“I just think the winners played so well. Hats off to them.”

Four players tied at minus-9, including current money leader Jillian Hollis. Behind them was a group of six at minus-8, including Casey Danelson of Osceola, Wis., who began the day in a three-way tie for third at minus-7.

60 players made the cut for the third and final day of the tournament, which began with a record field of 156. The total purse for the tournament was $200,000, with the top 10 in the money race all participating.

But perhaps the biggest highlight of the weekend came when MSU amateur exemption Yurika Tanida of Japan, who was featured in Thursday’s edition of the Daily Press, sank a hole-in-one on Island green No. 15 Saturday. She made the 156-yard shot with a 7-iron.