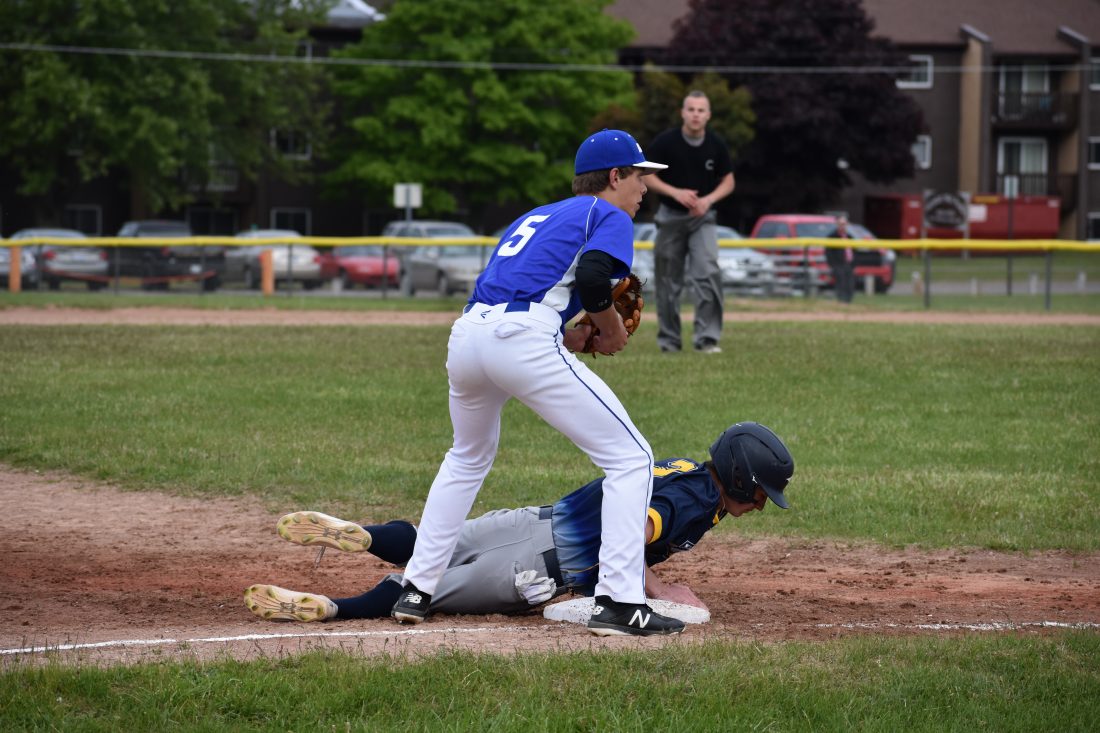 MARQUETTE — If there’s one word to describe Tuesday’s game between the Negaunee Diamonds and Marquette Blues, it was efficient.

The game went remarkably fast and, in the end, the outcome came down to just one team catching a couple of breaks that put them over the top.

It was Negaunee who caught those breaks and they all came in the fifth inning as the Diamonds plated two runs in the bottom of the frame to earn a 2-0 shutout win.

The game started off a pitcher’s duel between Negaunee’s Jacob Adriano and Marquette’s Brendan Kaski with both hurlers keeping the opposing offenses at bay. However, in the bottom of the fifth, Jake Hill got the Diamonds’ offense going with a base hit. Hill later stole second and made it to third on a single by Eric Johnson. Kaski then forced Carter Richardson to hit a grounder back to the mound, but his throw to catch Hill, who was leading off third base, was late and the Diamonds now had the bases loaded. The Blues had a chance to get out of the jam as A.J. Suardini hit a ground ball to short. Marquette forced out Richardson at second, but the throw to first to complete the double play sailed high. As a result, both Hill and Johnson came around to score on the play and the Diamonds led 2-0.

“Kaski is a good pitcher,” Diamonds head coach Jason Siik said. “He pitched well in the high school season and he looked good in the Legion season. We just started to put some balls in play and had some good baserunning and we were able to manufacture some runs on an error.”

Marquette had a chance to answer back in the top of the sixth as Jakob Peterson led off with a base hit. With two outs, Holden Shaneberger drew a walk off Adriano and the Blues had the tying run on base. However, Adriano got Brock Taylor to hit a groundout to second to end the threat. The Blues then went down quietly in the seventh to close out the win for Negaunee.

“I think we were a little tired from the weekend and it showed a little bit offensively,” Marquette head coach Derek Swajanen said. “When we got into a groove over the weekend, we were hitting the heck out of the ball. Jacob is a nice pitcher and we’ve seen him enough over the years, but I was really disappointed with that one inning. It should’ve still been a 0-0 game. They got a guy on first base and I thought we clearly threw him out at second. I don’t think there was any doubt about it. Then we still had a chance to get out of the inning when they hit a ball back to the pitcher and then they were safe there. Then we still had a chance to get out of it when we had a possible double play. So we had three chances to get out of that inning and we didn’t. I thought we should’ve gotten out of that inning with no runs and it still should’ve been a 0-0 game. So I was kind of upset about that. But we played well defensively.

“I thought we hit some good barrels. But they were right at a lot of their outfielders. Blake (Henriksen) was unlucky. He hit two of them that should’ve been gappers. We’re just keeping on building and building toward the end of the year. I’m really happy and pleased with how the team has been playing. We went down to that tournament (the Rebel Invitational) and had a good, solid second place finish. We beat some good teams and we’ll just continue to improve.”

“Jacob looked really good,” Siik said. “He had a few bouts of control issues, but was able to battle back. He was nipping corners and moving the ball up and down. I thought he was really strong and he showed something today. We played great defense behind him too.”

Swajanen also praised his own pitcher for having an all-around solid day as Kaski kept the Diamonds from getting any extra base hits.

“Kaski did a real nice job,” Swajanen said. “He had only three hits before that last inning and then he gave up that fourth hit. All the hits were pretty soft. There were a couple of bleeders, two bleeders there and another over here. All their hits, I don’t think any of them went more than maybe 100 feet, but they fell in there and that’s’ what happened. He did a really good job. He’s gotten better and better. He’s efficient and works hard and works quick. That’s why a lot of our players like to play behind him.”

The Blues host Menominee for a doubleheader at 6 p.m. tonight and Swajanen said that it’s going to be a long week with a tournament in Escanaba looming this weekend as well, but also added that his squad is having fun.

“I think we’ve got one day off and then we start four more,” he said with a chuckle. “So we’re kind of road warriors right now and traveling all around, but that’s what they love doing and hopefully, it will pay dividends in the end.”