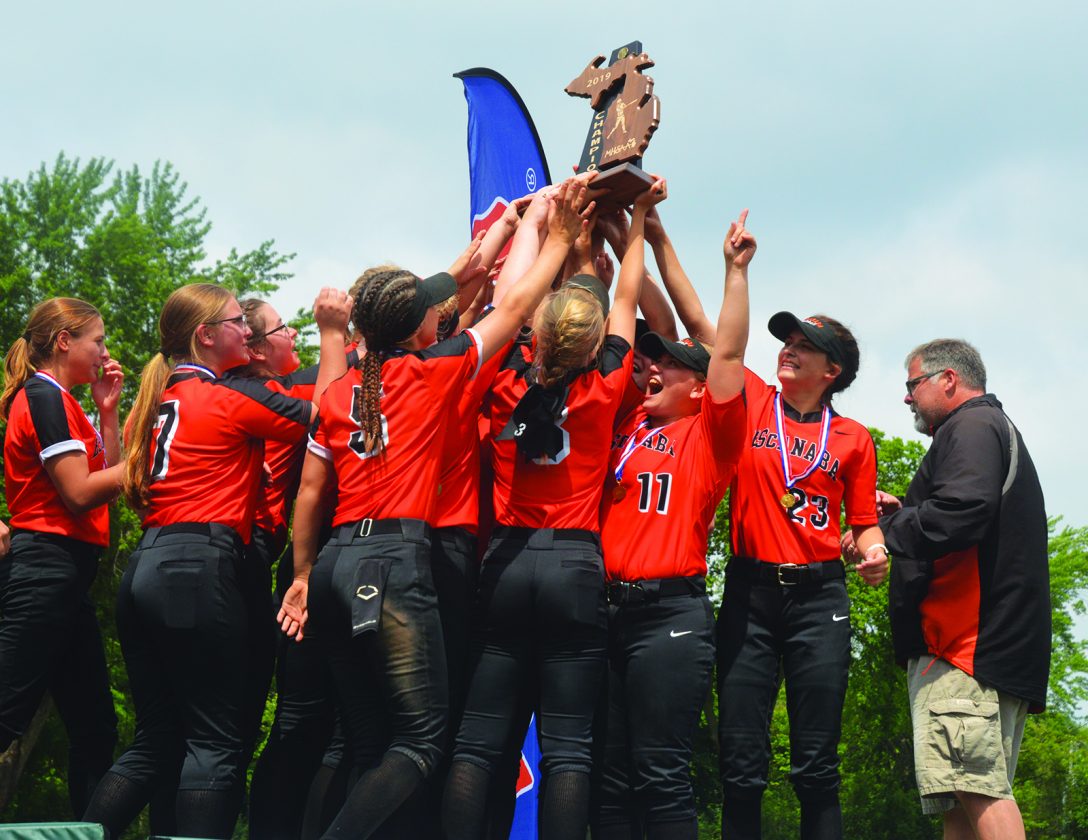 Escanaba was the more poised team, showing its veteran experience and continuing to make winning plays in capturing its second straight Division 2 softball state championship with a 7-3 win over Stevensville Lakeshore here Saturday.

Esky ace Gabi Salo retired the side in order in the seventh inning, finishing it off by striking out Lakeshore’s Laney Mead as the Eskymos (34-3) rushed the field to celebrate another state title.

The tide of the game was swung in the bottom of the fourth inning when Nicole Kamin — who hit a go-ahead two-run home run in the semifinals — lifted a routine fly ball into right field with the bases loaded. Lakeshore’s Gianna Kerschbaum — who began the game pitching — drifted a few steps to her right and dropped the ball off the side of her glove, allowing three runs to score and giving Esky a 5-1 lead.

“At first, I didn’t see it. I just stood on first and started walking back to the dugout actually,” Kamin admitted. “Then, (assistant coach) Ross (Rahoi) was yelling at me to stay. I saw all the runs coming across to score and the throw to home when I went to second. It was a big momentum builder.”

With Salo pitching, it seemed as though the game might be over at that point. But the Lancers had more success against her than any other opponent this season, as they battled their way back with two runs in the sixth on five straight singles. However, the damage was limited due to right fielder Lexi Chaillier gunning Lakeshore’s Meghan Younger out at home and Salo ended the threat by striking out Reneigh Sandmann with runners at the corners.

“I really didn’t expect her to go all the way home because I was pretty far in,” Chaillier said about her throw. “As soon as I saw her rounding third I just knew I had to go for it.”

Solid baserunning in the bottom of the sixth put the game away. Carsyn Segorski and Chaillier led off with back-to-back singles, then stole second and third to put themselves in scoring position. After Kamin and Dakota Cloutier struck out, Segorski and Chaillier both scored on a wild pitch to make it 7-3 heading to the final frame.

“There isn’t any other kid (Chaillier) that’s going to sneak under that last tag and deflate all the energy away from the other team,” first-year Esky coach Gary Salo said. “They had their big bats coming up in the next inning so I didn’t want to give them any extra energy. It also allowed me to let loose on pitch calling.”

The Lancers (33-11) struck first on an RBI single by Younger in the first inning. Esky responded on a sacrifice fly by Salo in the bottom of the first and took its first lead on an RBI groundout by Chaillier with the bases loaded the in the second to make it 2-1.

Salo — who was awarded the 2019 Total Softball Michigan High School Softball Player of the Year Award after the game — earned the complete game win, surrendering three runs on seven hits while fanning 11 and walking one. Segorski and Heather Bergstrom led the offense with two hits apiece while Salo and Chaillier each had an RBI.

Isabella Najera took the loss for Lakeshore, allowing five runs (one earned) on four hits while walking and punching out one through three innings. Younger led the offense with three hits and an RBI while Anna Chellman added a hit and two RBIs.

“It’s nice to think you’re just going to outscore people and win games on offense, but you have to win games on defense. We’ve been doing a good job of that, but you can’t walk people and you can’t have too many errors. You can’t walk people — bottom line. Their first two runs were on leadoff walks. Then you’re fighting from behind and you’re scrambling,” Lancers’ coach Denny Dock said.

“I would never say anything poorly about their ball club; they won the game. They made the pitches, made the hits, made the plays when they had to make it. There’s no excuses; they’re a nice ball club.”

“We were very free and loose today,” coach Salo said. “We had a great hitting session this morning. We played our best game in every single aspect except for driving the ball. We hit the ball hard, but we didn’t find the alleys as much as we’d like. I think we had a decent amount of hits on the board though, so we put a lot of pressure on them.”