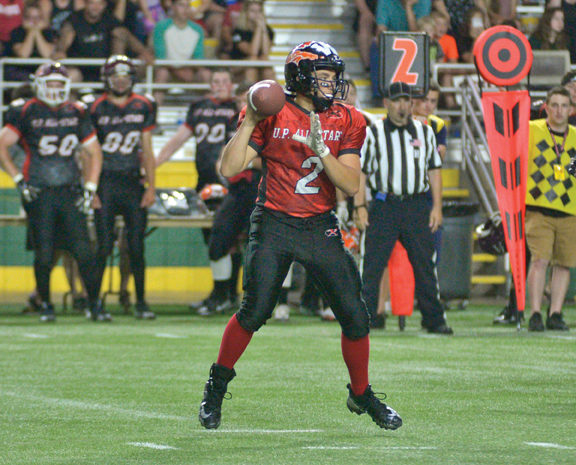 Red team quarterback Alec Blank of Munising drops back while looking for a receiver during the 2018 Upper Peninsula All-Star Football Game played June 30 at the Superior Dome in Marquette. (Journal photo by Corey Kelly)

MARQUETTE — As in past years, the 12th annual Upper Peninsula Football All-Star Game will have a number of events this week leading up to the game to be play Saturday afternoon at the Superior Dome in Marquette.

For the third consecutive year, players were selected with a fantasy football-type draft by the team’s coaches in March, as it has made the game more competitive rather than the original East-West or North-South divisions of players.

Game time is 1 p.m. Saturday, with the doors opening at noon.

On Monday, players and coaches checked in at Meyland-Magers Hall on the Northern Michigan University campus, while there was a food drive for the St. Vincent de Paul House food pantry at the check-in location this morning.

This evening, team and individual pictures will be taken as part of media day. Players and coaches will be available for interviews from the media, too.

Wednesday afternoon will feature the annual Players Skills Challenge. Players will compete for the titles in the Fastest Man, Strongest Man, Receiver, Quarterback Challenge, Kicking and Punting challenges. Several of the competitions, including fastest and strongest man, have separate lineman and skill-position divisions.

On Thursday, players and coaches will travel to Big Bay to visit the Bay Cliff Health Camp, which has become one of the signature events of All-Star Week. Bay Cliff is a summer camp for children with physical disabilities and the all-star players spend time with the campers, showing them football drills and finishing the day by having dinner with Bay Cliff campers and staff. After dinner, players join campers in a traditional flag-lowering ceremony at the central square, which ends each day at Bay Cliff.

Friday evening will be the All-Star Banquet, which provides family and friends a chance to connect with the players after a long week of practice and activities. It is formal for the players, as they take turns standing in front of everyone, introducing their roommate for the week and telling everyone some things about that person.

Players are also recognized for their accomplishments during the Skills Challenge and receive their All-Star rings. The guest speaker will be Jeff Olson, who just finished his last season at Ishpeming after bringing the Hematites several state championships and several more state finals appearances in the past decade.

The U.P. Football All-Star Game is donating proceeds to these charities — Beacon House; the U.P. Sports Hall of Fame; as well as Brimley, Negaunee and North Dickinson high schools.

A lottery drawing was held to select the schools with donations made directly to their football programs. Each year, new schools are chosen until all U.P. schools have received benefits from the game. Several other schools — Westwood, Manistique, Sault Ste Marie and Brimley — will also receive donations in the form of all-star game equipment, including practice jerseys and footballs.

ESCANABA — The induction banquet has again been postponed for those honored this year for enshrinement in the ...