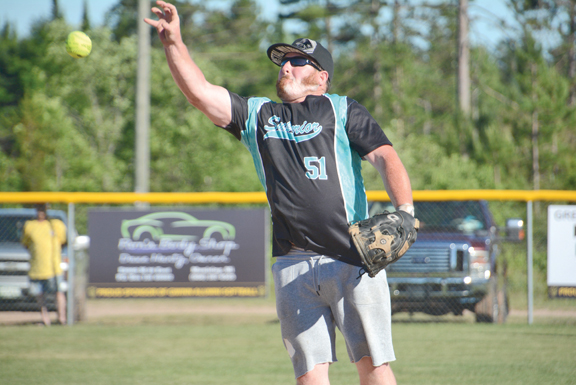 Alex Baysore of the Class of 1999 pitches during the Gwinn alumni softball tournament at the Forsyth Township Ballfield Complex in Gwinn last July. (Journal file photo by Corey Kelly)

Gwinn kicks off the action on Friday, with its second annual extravaganza taking place on two fields at the Forsyth Township Ball Field complex right across from Gwinn High School.

Twenty-eight teams spread across three divisions are included, with the 16-team younger division nicknamed the Diapers Bracket — classes from 2000 and later, along with a Misfits team — each playing a game Friday starting at 5 p.m.

A pair of six-team older divisions — they’re called the Depends Bracket with all the classes from the 20th century — start Saturday morning, the oldest division being a combined 1975-76-77-78 group.

The winners of the two Depends Bracket divisions face off at 8 p.m. Tuesday for the Depends championship, while the Diapers Bracket finale takes place at 9:30 p.m. Tuesday.

The overall championship will be decided at 5:15 p.m. Wednesday, the only game scheduled for that day.

Here are rundowns on the other area tourneys, in order of their start-up dates:

The 40th annual Ishpeming High School tourney, touted as the “World’s Oldest Running Alumni Softball Tournament,” runs Tuesday through Thursday, culminating with three championship games on the afternoon of the Fourth of July.

This year’s event is dedicated to the memories of 1979 graduate Ted Heilala, along with Justin Karnack, who would’ve graduated this spring.

In addition to the traditional Blue and White divisions, the new Kalevi’s Lady Hematite Division features three teams with more liberal roster rules — graduates can include their daughters and granddaughters on their teams and can play in the regular coed divisions, too.

Other fields used at the tourney are the Fast Pitch field, which along with the Slow Pitch field are at the Ishpeming Ballfield Complex, and the Mather A field.

The White Division includes the 14 youngest teams from 2002 on.

Red, White and Blue divisions will commence play on Wednesday with championship games set for the morning and early afternoon of Sunday, July 7.

First-round games will be split between the Sunnyside and Clarksburg fields, with all games in subsequent rounds played at Sunnyside.

Actually, the only Wednesday games will be first-rounders in the youngest Blue Division that include 14 teams from the classes of 2007 to ’19, along with the Staff team.

The White Division, with 14 more teams from 1990 to 2006, begins next Thursday afternoon, as does the eight-team Red Division for everyone 1989 and earlier.

The Junior Varsity Division includes teams from 2003 and younger, along with NPS Staff, with the Varsity including 2002 and older.

An Oldtimers game between Marquette and Negaunee will be held at 3 p.m. on Wednesday, July 10, also the day for weather makeups.