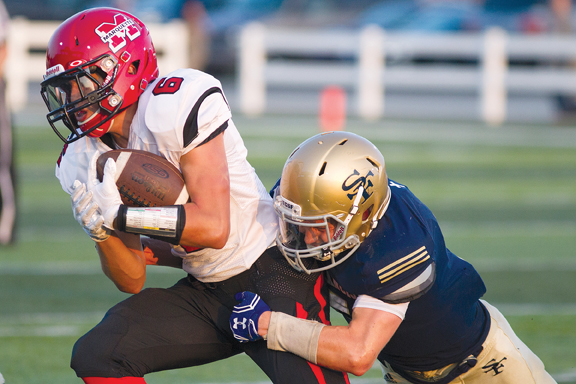 Marquette’s Ethan Martysz, left, tries to pull away from a St. Francis defender in their game played in August 2017 in Traverse City. (Traverse City Record-Eagle photo by Tessa Lighty)

MARQUETTE — When three area high school players take the field in the Superior Dome on Saturday afternoon for the Upper Peninsula Football All-Star Game, they’ll definitely bring some experience with them.

The game involved the best players from around the state, almost all of whom have committed to college programs. All three area players suited up for the West team.

“It was such a crazy experience,” said Kruhlik, a Northern Michigan University commit. “Imagine playing against the best kids in Michigan. The competition was unreal. The formations and strategy were unreal. It was just a great environment and I made some lifelong friends. I couldn’t have asked for more.”

Gilles, a Michigan Tech commit, enjoyed the fact that he got to not only play against some of the best in the state, but also make some connections and friendships that could last well into the future.

“It was great meeting a bunch of new guys,” he said. “I’ve only met a couple of guys, but they were all from the U.P.

“But by the end of the week, it was sad because we all had to leave and it’d be rare that we’d see each other because we weren’t playing each other.

“So it was really fun to meet new people and create new bonds and see where you’re at the state level of competition.”

Speaking of bonds, Martysz already has bonded well with one of his future college teammates. A wide receiver, Martysz caught a touchdown pass from Alex Fries of Saginaw Swan Valley and will probably be catching a few more when they play for Tech this fall.

“Alex and I are really tight,” Martysz said. “We talk all the time and we talked about it before the game and said we needed to get one (a TD pass). And we did so that was awesome.”

Martysz also echoed Gilles’ and Kruhlik’s thoughts and was glad he could play another game with two other quality U.P. players.

“It was a great experience,” he said. “It was truly a blessing to be able to go and represent the U.P. down there. We had two other guys go and we put on a show down there, so it was a great time.”

By Journal Sports Staff MARQUETTE — The Marquette Blues entry into the Upper Peninsula Under-19 Baseball League ... 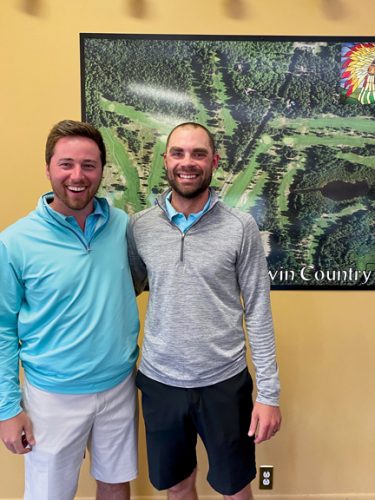