Memories of the greats 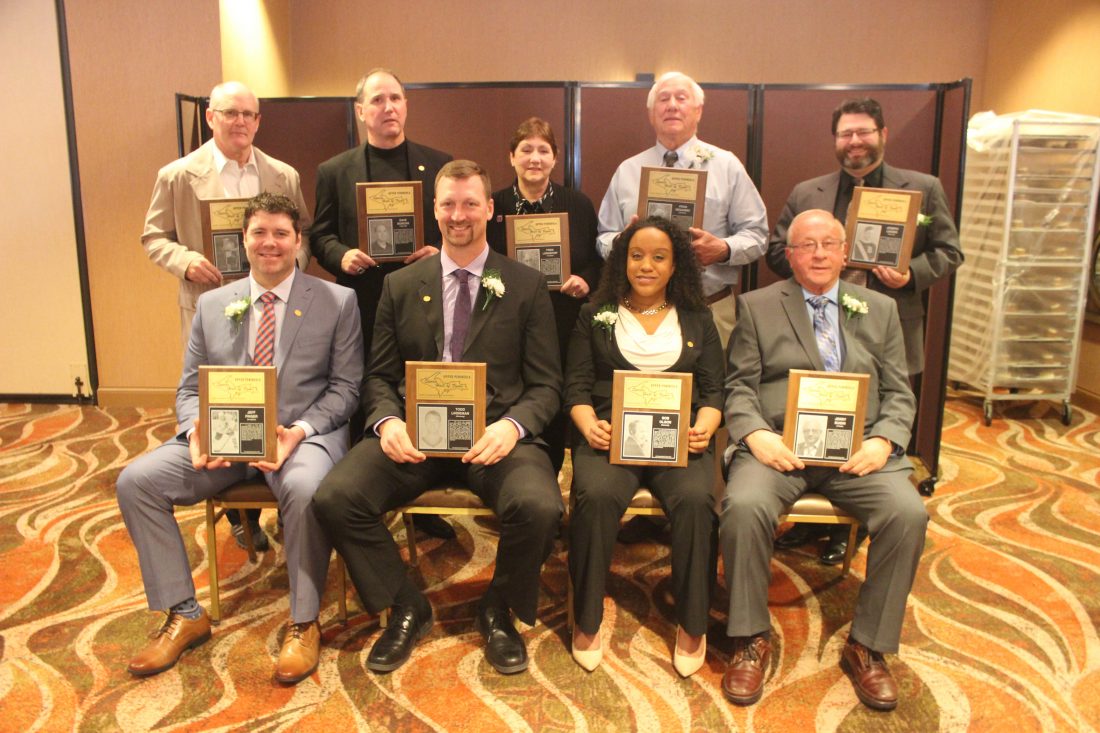 The Upper Peninsula Sports Hall of Fame inducted 10 members on May 11 at its 48th annual banquet held at Island Resort and Casino in Harris. They include, front row from left, Jeff Finger of Houghton; Todd Lindeman of Channing; Amber Jointer, representing her grandfather, the late Bob Olson of Hancock; and Jerry Bugni of L'Anse. Top row from left, Chris Hofer of Kingsford; Dave Duncan of Cedarville; Lynn Enrietti, representing her late father Fred Lonsdorf of Houghton; Fran DesArmo of Munising; and Michael Bates, representing his grandfather, the late Joseph Linder of Hancock. The 10th inductee was the late Marmaduke "Duke" Christie of Escanaba. (Photo courtesy of Dennis Grall of the U.P. Sports Hall of Fame)

HARRIS — The late Marmaduke “Duke” Christie of Escanaba was one of 10 new honorees inducted into the U.P. Sports Hall of Fame at the 48th annual banquet Saturday evening in Harris.

Also inducted were Jerry Bugni of L’Anse, Fran DesArmo of Munising, Dave Duncan of Cedarville, Jeff Finger of Houghton, Chris Hofer of Menominee and Kingsford, the late Joseph Linder of Hancock, Todd Lindeman of Channing, the late Fred Lonsdorf of Houghton and the late Bob Olson of Hancock.

Christie’s most spectacular performance came in a football game against Ishpeming in 1920, when he scored 66 points to lead Escanaba to a 102-0 win. That equalled the state record set by Flint Central’s Cecil Hardy in 1914, a record which still stands. He scored 10 touchdowns in that game, one shy of Hardy’s state record.

“There is a guy from Escanaba who is smiling deeply in his grave tonight,” Grall said. “Karl Dickson always pushed for Christie to be inducted into the U.P. Sports Hall of Fame, and tonight he is.

“Christie scored 164 points in 1920, with 21 TDs (eight via interceptions) and 38 point-after tries. Research by UPSHF inductee Karl Dickson indicated, ‘he shines especially bright in a broken field, but he is also a line-plunger of considerable ability. His forward passing is accurate and well-timed and he has out-punted every opponent during the last two seasons. Christie’s defensive work was as good as his work on offense. He was a deadly tackler and had a remarkable gift for solving opponent’s plays.'”

He was also named MVP at a high school basketball tournament in 1920 after playing four games in one day.

Christie attended the University of Michigan before transferring to Buena Vista, Iowa, to play college ball, where he was a tailback on the football team that went undefeated and was a conference champion. He was also named a captain in his first year on the basketball team which won the league title.

Christie also ran in the Drake Relays and was a high school track coach.

His plaque will be on display at Escanaba High School.

Grall wanted to thank the archivists in Iowa for helping with his research on Christie.

“Extensive research by the Buena Vista archives was instrumental in gathering information on the Duke,” Grall said.

Bugni was a football, basketball and track coach for 46 years at L’Anse. He was the Copper Country Conference and Class C state Coach of the Year in 1968 and 1988. He joined the Michigan High School Football Coaches Association HOF in 1995, and he was also a multi-sport athlete at Wakefield High School.

“I’ve had a lot of support from my kids and my wife, especially when we lost,” Bugni joked. “Thanks to the players and assistant coaches that I’ve had that have helped make me successful over the years.”

DesArmo led Munising to 12 U.P. championships in track and cross country in 43 years of coaching. He was twice named U.P. Coach of the Year.

“I was lucky to have good assistants,” DesArmo said. “Thanks to all the athletes I’ve coached. Without their ability and hard work, I wouldn’t be up here. I also want to thank my family for their dedication. They had to deal with late practices, long meets and never having a spring break.”

Hofer was a three-sport athlete at Menominee, a three-year starter at defensive back for Northern Michigan University’s football team, earning team MVP in 1984. He compiled a 249-89 record coaching football at Kingsford in 31 years, winning the Class B state title in 1993. His dad, Ken, is also a UPSHF inductee.

“When you get selected, sometimes you reflect on what you did and what other people did for you. I never played for a coach I didn’t like,” Hofer said. “I’d like to thank all the guys I coached with in Kingsford. I’m humbled to be here, and humbled to see all the support from players I have here.”

Duncan compiled a 429-166 record as the boys’ basketball coach at Cedarville. He led the Trojans to a Class D state championship in 2007, and is fourth in victories in U.P. boys’ coaching annals.

The Trojans, who had a 51-game winning streak as part of their state title run, won 17 conference and district titles, 11 regional crowns and twice reached the state finals. His wife, Sonja, is also a UPSHF inductee.

“This is a great honor that I never expected,” Duncan said. “I feel like the U.P. is family. When we went down to the state finals we had unbelievable support. I’ll forever cherish that.”

Finger was a member of three youth championship hockey teams. He reached the NHL with the Colorado Avalanche and Toronto Maple Leafs, totaling 17 goals and 40 assists in 199 games as a defenseman. He also helped Minnesota State win the WCHA title in 2002.

“Growing up in the U.P., I got a little tougher than most,” Finger said. “The cool thing about being from the U.P. is you feel like you have a whole area code behind you. We come from a very special place.”

Linder is a member of the U.S. Hockey Hall of Fame. He was standout skater for hockey icon Doc Gibson as a high school senior in 1904 on the Portage Lake Michigan team. He briefly played pro hockey before returning to amateur hockey from 1905-11 in the Copper Country. Linder was a coach, manager and sponsor in the Superior-Duluth area until he died in 1948.

“The legacy of Joe is strong in the Copper Country,” his great-grandson Michael Bates said. “Joe pushed hard for hockey to move indoors — something I’m sure people in the U.P. would approve of.”

Lindeman was a Dream Team basketball player at North Dickinson in 1991. He then played four seasons for coach Bobby Knight at Indiana before playing professionally for the Connecticut Pride in the Continental Basketball League for four seasons, helping them win a title in 1999. He had tryouts with four NBA teams from 1996-2002.

“The fundamentals of basketball is where the game starts. My coaches did a great job of teaching that,” Lindeman said. “Basketball has taken me all over the world. I became friends with some of the best players in the world.”

Lonsdorf breathed life into skiing at Michigan Tech. He was dedicated to alpine skiing, but also laid the groundwork for cross country skiing. He was the varsity ski coach, manager, and physical education instructor at Mont Ripley from 1947-79. He’s a member of MTU’s Sports HOF and served in the Army’s legendary 10th Mountain Division in World War II.

“He grew up in Iron Mountain and learned to ski in the 10th grade. He had a lifelong passion for skiing, working 70 hours a week and weekends,” his daughter Lynn Enrietti said. “We’re very appreciative of the UPSHF for this.”

Olson was the radio voice of MTU hockey for 35 years. Bob and his wife, Edda, operated Hockey Central, a resource for college hockey. A member of MTU’s Sports HOF, he founded the Hancock Canal Run in 1975. He was passionate about running, participating in the Boston Marathon eight times. He also ran around Lake Superior with UPSHF inductee Bob Figuli.

“In the mid- to late ’60s, he quit smoking and picked up running,” his daughter Rosanna Olson-Hedahl said. “People in Hurley (Wisconsin) often asked if he needed a ride when he was running. I figured out he ran just about 25 marathons. He enjoyed just about everything he did.”