Cranking out the hits 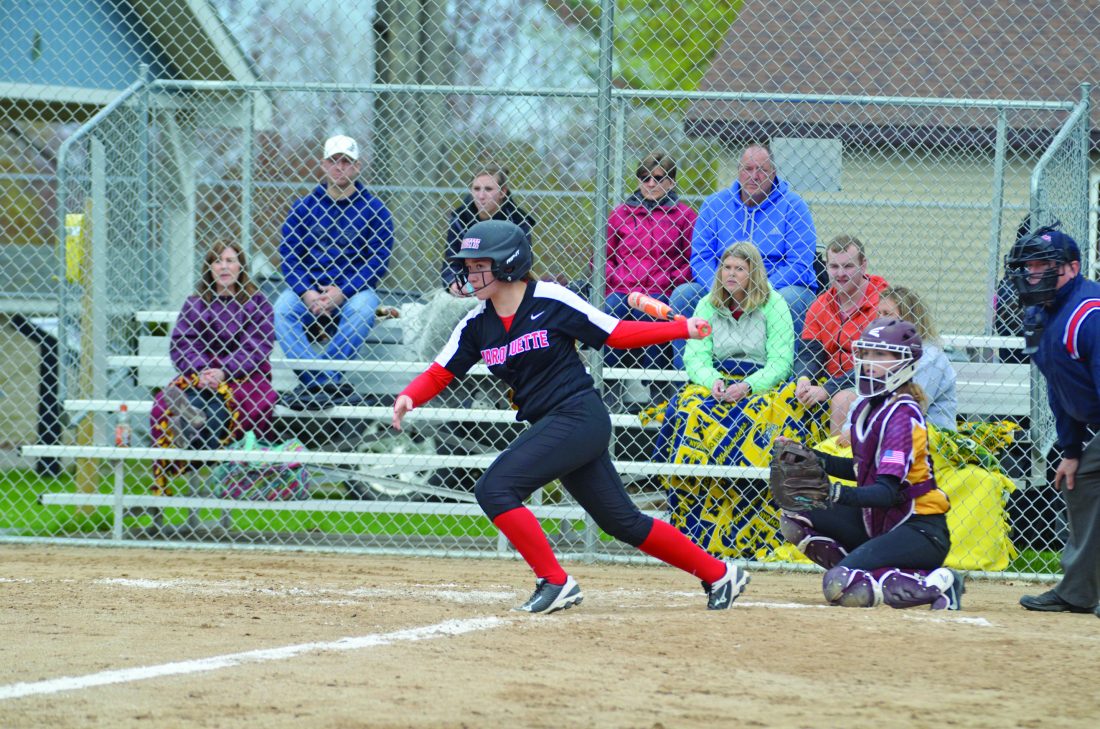 Marquette Redette Gabby Swajanen takes off after hitting a ball across the field during Friday's game against Menominee. (Journal photo by Trinity Carey)

MARQUETTE — Junior pitcher Amanda McIntire fanned 15 Menominee hitters and the Marquette Senior High School varsity softball team’s offense cranked out 22 hits Friday afternoon, but the Redettes were forced to settle for a doubleheader split after the Maroons made a seventh inning comeback in Game 2 at Lions Field.

In its final pair of regular season contests, MSHS pulled away for a 9-2 victory in Game 1 before falling 8-6 in a back-and-forth affair in the nightcap.

After holding senior night ceremonies between games, the Redettes seemingly fell flat according to head coach Paul Seibert, noting the three runs that were given up in the first inning of Game 2.

“It was obviously senior night and it happens a lot,” he said. “Almost every year, the girls kind of come out flat in that second game. We gave up three runs that we shouldn’t have right away.

“We kind of fought our way back and took the lead, manufactured a couple of runs late and just lost focus. Give credit to (Menominee) though, they came back with three or four hits in the seventh. We had the meat of our lineup up and still thought we had a pretty good chance, we just didn’t get it done.”

Lexi Trombley and Taylor Myers were the two Redettes seniors honored between games, and Seibert credited them for being leaders on his young team all season.

“Those two seniors are awesome,” he said. “They’re great character kids and obviously they’re going to have to lead us through this little playoff run here. They’re both good softball players, but more even more importantly, they’re good kids, good people in our community, good people on our team and they’re going to be dearly missed next season.

“Hopefully we can go on a little run here for them and give them a good send-off.”

Menominee head coach Jim Berger said he was satisfied with the way his team battled back in the second game, especially after Marquette broke Game 1 wide open in the final two innings.

“It was a nice win and they did a really good job of not getting down on themselves,” he said. “They’ve gotten down on themselves before and have kinda given up and made some mental mistakes. Overall, it was a great job (today).

“The bats came alive. We’ve kind of been struggling all year long but got a bit of new blood in the lineup. We brought up some JV players who kind of infused a little energy into the group. I was happy. They’re seeing the ball and hitting it. The first game was a little rough with some mental errors, but overall, I was pleased with our all around effort.”

Tied 2-2 in the fifth inning of Game 1, the Redettes took the lead when Maiya King doubled to left scoring Gabby Swajanen. Jordon Haynes and King came home after that on a single to center field from Myers. MSHS added another in the fifth and two more in the sixth.

Marquette garnered 11 hits in Game 1 with King going 2-2 with 2 RBI, and Trombley and Maddie Carter each going 2-4.

McIntire went the distance striking out eight, while allowing just four Maroons hits and two walks. Izzy Berger took the loss in the pitcher’s circle for Menominee with one strikeout and no walks.

In the nightcap, Menominee scored three in the first inning before the Redettes knotted things up in the fifth on a sacrifice fly from Trombley that scored Swajanen.

Carter followed that shortly after with a double to left-center scoring Haynes and King to put MSHS in the lead for the first time.

Ely Wellner came home on a wild pitch in the following inning to pull Menominee within one, and a base knock to right from Erin Barrette scored Ashley Powell to notch the score at 5-5.

Marquette countered with a one-run sixth, but the Maroons rallied with three runs in the seventh with hits from Ashlee Erickson and Wellner, who also scored on a wild pitch again to make it 8-6.

Emma Laatsch earned the win on the mound for the Maroons, striking out one and not allowing a walk. Marquette cranked out 11 more hits off of Laatsch, while McIntire took the loss with seven strikeouts and five walks.

Seibert was pleased with McIntire’s 14-inning performance despite only being able to mark one win on the scoresheet.

“She’s really come along in the second half of the season,” he said. “She’s hitting her locations way better which is obviously effective when you try to get out good hitters. At this level, there’s not really a bad hitter and she’s done a really nice job in the second half.”

McIntire said 15 K’s over two games may be a personal best, but her focus has shifted to districts next week and improving her game.

“I feel pretty good,” she said. “I want to say 15 (strikeouts) is my record, but I’m not sure. Now it’s just all about the practice and the drills that we’re doing, and really focusing on what pitches I need to work on and pitching them consistently to make them better.”

The Maroons are now 2-12 on the season with one regular season tilt remaining, visiting Manistique on Tuesday. Marquette finishes with a 6-23 mark and turns its attention to the MHSAA Division 2 district tournament, facing Petoskey in Escanaba on Tuesday.