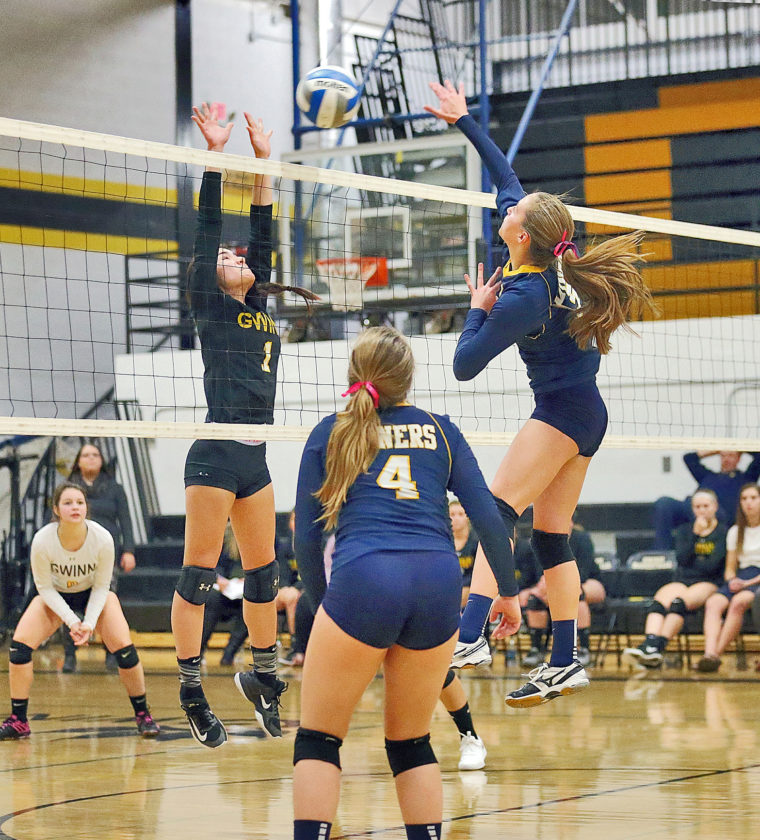 Negaunee's Chloe Norman gets a kill when she fires this shot through the defense of Gwinn's Sydney St. Clair in the fourth set. (Photo courtesy of Daryl T. Jarvinen)

GWINN — It’s the painful reality of playoff sports. While one team basks in its glory, the other team’s season must come to an end.

The Negaunee High School and Gwinn High School volleyball team battled through some close sets Wednesday night at the Modeltowners’ gym with the Miners coming back from down 0-2 to win the match 3-2 in a Halloween thriller during the MHSAA Division 3 District 66 volleyball tournament semifinals.

NHS head coach Sarah MacDonald said getting more aggressive as the night went on was the key to victory, as well as telling her girls not to give up being down 2-0.

“Anything is possible, especially in the third set,” she said. “We’ve played many matches where we’ve won the first two and the other team comes back. The match isn’t over just because the first two didn’t go your way and that’s what I told the girls between sets.

“The girls stayed aggressive. They had the aggressive mentality and that goes into every area of the game. If you’re aggressive, you’re going to go for that ball and I think they kind of picked it up in that way.”

“Gwinn played a great match,” she said. “They’re such an awesome team and it’s always a good match when we come here.”

For Gwinn head coach Toni Roberts, the five-set loss comes as possibly the hardest one she’s taken in the district tournament, falling to the Miners for a third straight year.

“It’s a heartbreaker,” she said. “Negaunee always comes out strong in the tournament and we just haven’t been able to stop them the past three years.”

Roberts also thanked her seniors and is looking forward to next season already.

“”I’m super proud of my seniors,” she said. “All four of them have been absolutely outstanding, especially (outside hitter) Brooke Mannor. She’s led our team every night and I’m not sure what we’re going to do without her next year. We’ve got a ton to be proud of and a lot to look forward to next year as well.”

The Miners raced out to a 7-0 lead in Set 1 which included kills from Abbie Tollefson and Alexa Gravedoni before Gwinn finally got on the scoreboard on a kill from junior middle blocker Megan Ruokolainen.

The Modeltowners chipped away at the lead and overtook the Miners for the first time of the night 11-10 on a kill from senior middle blocker Sydney St. Clair.

Gwinn pulled ahead 16-12 before Negaunee tied the set 18-18 on another kill from Gravedoni.

Gwinn pulled away at the end and won the set on a four-hit violation.

The Modeltowners took Set 2 with ease after pulling ahead 18-10, and won the set on an attack error.

The third set proved to be comeback time for the Miners. After Gwinn took a 2-0 lead, Negaunee went on a six point run to go up 6-2. The Modeltowners pulled within two but the Miners never looked back, going up 18-13 and forcing Gwinn into a timeout before eventually winning the set.

Set 4 was a close one with Gwinn taking a 4-0 lead to start things off, which included a kill and a service ace from junior outside hitter Emily Curtice.

Later on, with Gwinn up 18-16, the Miners used a four-point run to pull ahead 20-18 causing the Modeltowners to call timeout. Gwinn pulled within 22-21, but Negaunee earned the final three points of the set, the last coming on a deflection out-of-bounds.

The Modeltowners had another early lead in Set 5, jumping ahead 6-1 before a Negaunee timeout.

Gwinn managed one more point on a block from St. Clair, but the Miners notched three of the final four points as Sierra Hendrickson clinched the match and sent her team to the district championship with the final kill of the night.

In the other half of the District 66 bracket, Manistique topped Westwood 3-0 to set up tonight’s district title game between the Emeralds and the Miners.

Norman said the rally by her team should give them some momentum going into tonight’s match.

“It feels so good to rally back from being down 0-2,” she said. “We did a really good job rallying back and staying positive. We’re going to keep our heads in it and stay positive to get ready for (tomorrow).”