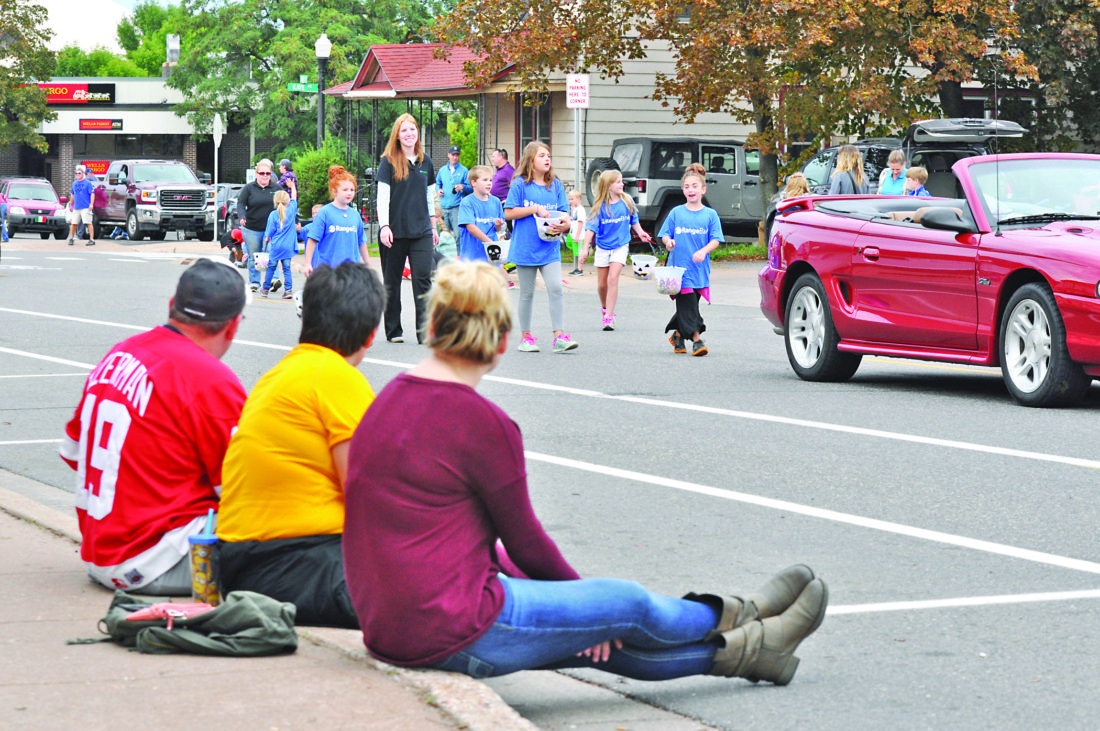 Area residents line the sidewalks along North Third Street in Marquette for the 2014 Hockey on Third Parade to celebrate the city's love of the sport. As it is each year, the parade is held on the first day of the Marquette Oldtimers Hockey Tournament. This year's parade is at 6 p.m. today, with Oldtimers games to start at the same time at nearby Lakeview Arena. (Journal file photo)

MARQUETTE — It’s been nine years of hockey and nine parades in the making.

Today marks the start of the 10th anniversary of the Marquette Oldtimers Hockey Tournament, which includes its annual Hockey on Third Parade near the Lakeview Arena and Berry Events Center venues.

The parade, celebrating hockey in general in Marquette and surrounding areas, kicks off at 6 p.m. at the intersection of Fair Avenue and Pine Street right between the two hockey arenas, according to information on the Downtown Marquette website, www.downtownmarquette.org.

It works its way several blocks west to North Third Street, then heads south, turning east for a block along Ohio Street before completing a circle up North Front Street and back to the hockey arenas.

The parade is meant not just for “oldtimers,” but for hockey players, supporters and enthusiasts of all ages.

“We start playing the games at 6 p.m. too,” said Ryan Riipi, the other tourney director, about the event’s four-day run.

Games will mostly be played at the two rinks at Lakeview, with the Berry being utilized for one game on Friday and six more Saturday.

The event includes 32 teams this year spread across five divisions — novice, 30-and-over, 50-over Gold, 50-over Silver and women’s.

“We have more teams in (the two divisions) of 50-and-over than any other — there’s four in one division and six in the other for a total of 10,” Riipi said.

Both directors figure about half the teams are based in Marquette County, with the balance coming from other areas of the Upper Peninsula; Sault Ste. Marie, Canada; the Lower Peninsula; Minnesota; and Wisconsin.

“(Detroit Red Wings great) Mickey Redmond came for about three years, but I don’t know if he plans on making a return to play,” Riipi said about the man who is now color commentator for Red Wings games on Fox Sports Detroit.

There is a $5 admission charge that covers the entire weekend. Proceeds go to the group that is working the entrances to the Lakeview and the Berry — the Northern Michigan University women’s club hockey team.

Five games will be played tonight with staggered starting times at both areans at Lakeview, then 14 more contests Friday beginning at 2:30 p.m. around the three rinks.

Saturday is the busiest day, with game starts running from 9 a.m. to 8 p.m. needed to fit in 26 games on the all the rinks.

For a complete schedule of games, visit the tournament’s Facebook website listed under Marquette Oldtimers Hockey Tournament. The schedule is at the upper right of its main page under “Recent Group Files.”