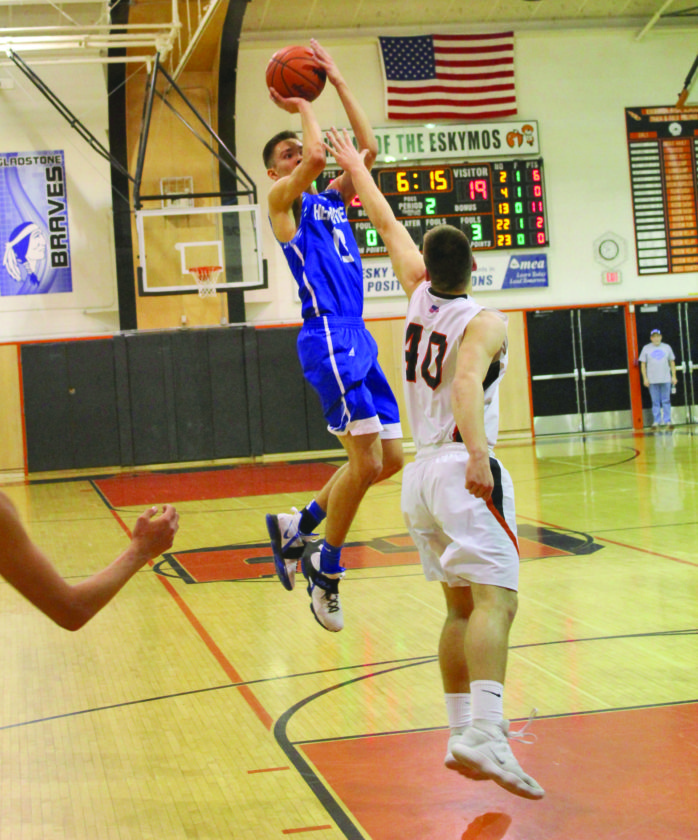 Hart Holmgren of Ishpeming pulls up for a jump shot over Escanaba’ Jared Nash during the second quarter of their high school boys basketball game played Thursday at Escanaba. The Hematites were victorious. (Escanaba Daily Press photo by Avery Bundgaard)

ESCANABA — The Ishpeming boys basketball team used a big fourth quarter and an historic night by senior Hart Holmgren to fly past Escanaba 66-60 on Thursday in a battle of top-five Upper Peninsula teams.

The Hematites, ranked fourth in Class A-B-C in this week’s U.P. Sportswriters and Sportscasters poll, trailed by six points early in the fourth quarter.

But they finished the game on a 14-2 run to steal a big win heading into the Class C district tournament being played in Negaunee next week. Ishpeming opens against Gwinn on Wednesday.

Both of Thursday’s combatants finished their regular seasons at 14-6. Class A-B-C No. 5 Esky is in a Class B nontraditional district hosted by Kingsford, playing at home against Gladstone on Monday.

After breaking the 1,000-point barrier less than two weeks earlier, Holmgren needed 18 points on Thursday to become the all-time scoring leader in Hematites boys’ history. He blew past that mark with 30 to exceed the previous record of 1,104 that had stood since 1965.

“Hart was hitting from the outside,” IHS head coach Anthony Katona said. “He was able to penetrate a little bit also against their zone.

“It definitely was a huge win to keep our momentum going as we end the season.

“We played a great Escanaba team. I thought we played the best complete game we have all year. We really worked the ball around really well to break that zone and come out with the win.”

The Hematites started strongly but only led 19-17 after one quarter. Holmgren came out firing early, scoring Ishpeming’s first eight points and totaling 11 for the quarter.

The Eskymos took control to start the second quarter and led by as many as eight points just before halftime, settling for a 40-35 advantage at the break.

“I thought we played a pretty good first half,” Esky coach Tracy Hudson said. “We were sharing the ball, we were getting the ball inside-out and our 1-3-1 (defense) was good.

“In the second half, we came out and didn’t do the little things. We were selfish and we didn’t have the leadership down the stretch.”

Esky grew its lead in the third quarter to nine points before a 6-0 run by Ishpeming cut the home team’s advantage to just 54-52 entering the fourth.

The Eskymos scored the first four points of the fourth quarter to go up six, but the Hematites answered with their final run that determined the outcome.

“In the fourth quarter, we got those loose balls, we got those steals, we secured those defensive rebounds and that helped us secure the win,” Katona said.

Ryan Robinette led the Eskymos with 20 points, while Austin Willette had 14 and Jared Nash 10.