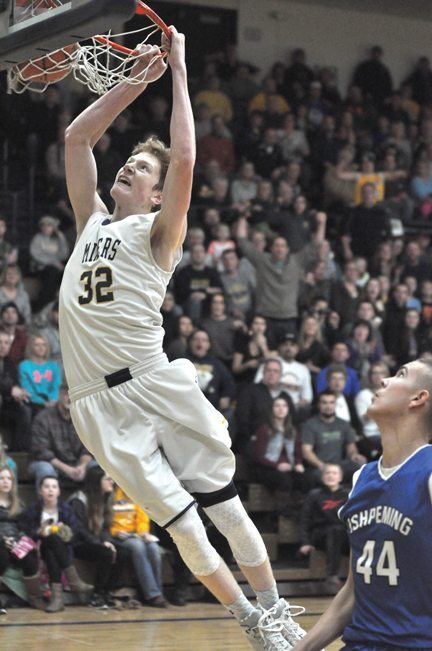 Trent Bell of Negaunee dunks during the first quarter of a game against Ishpeming at Lakeview Memorial Gymnasium in January 2016. (Journal file photo)

“I think they got a steal and they got him before anyone realized how good Trent is going to be.” — Dan W

Trent Bell of Negaunee dunks during the first quarter of a game against Ishpeming at Lakeview Memorial Gymnasium in January 2016. (Journal file photo)

Negaunee’s Trent Bell, front, works toward the loop for a layup as Ishpeming’s Hart Holmgren defends on Feb. 10 at Lakeview Memorial Gymnasium in Negaunee. (Journal photo by Rachel Oakley)

HOUGHTON — The Trent Bell that Michigan Tech basketball fans will see in the near future — the one relentlessly attacking the glass and chasing after every loose ball — was molded into a high-energy player during his time playing at Negaunee High School.

“In high school it started when Dan Waterman was the head coach,” Bell said of his relentless drive. “If you didn’t go for a loose ball, you came out of the game, so I just keep it going after having success (playing like that).”

The 6-foot-7 Bell utilized his offensive versatility — whether it was dominating in the post, taking a defender off the dribble or knocking down a 3-pointer — to average 19.6 points, 10.7 rebounds, two steals, two blocks and one assist per game as senior for the Miners. 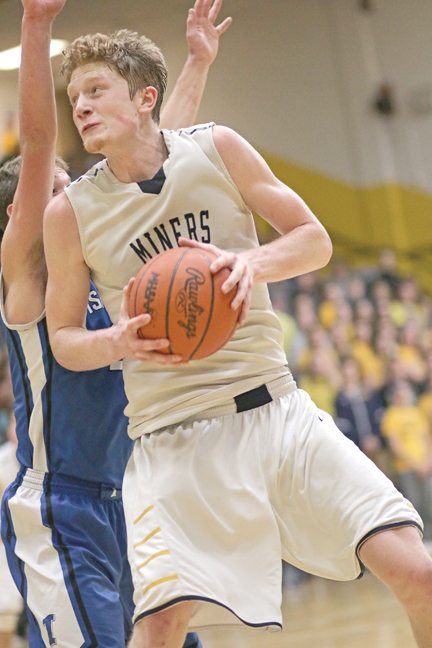 Negaunee’s Trent Bell, front, works toward the loop for a layup as Ishpeming’s Hart Holmgren defends on Feb. 10 at Lakeview Memorial Gymnasium in Negaunee. (Journal photo by Rachel Oakley)

He was runner-up for the Upper Peninsula Class A-B-C Player of the Year award, and was also a member of the All-U.P. Dream Team.

“I think Trent’s going to be a great player for (Tech),” Waterman said after Bell had scored 24 points and grabbed 14 rebounds in a 79-44 win over the Calumet Copper Kings on Jan. 31. “He’s just starting to scratch the surface at what he will be as a player.

“I think they got a steal and they got him before anyone realized how good Trent is going to be.”

Along with incoming freshman Dawson Bilski of North Central, MTU head coach Kevin Luke believes Bell will have the opportunity to make an impact during the 2017-18 season as a part of the frontcourt rotation.

“He’s going to be a surprise to a lot of people because he’s a really good player,” Luke said. “I’m expecting him to come in and give us good minutes in the post position.

“He has a great motor, great skill, unselfish and he’s going to be right in there with Dawson for valuable minutes.”

Bell and Bilski were two of the top talents in a solid U.P. senior class last season. They’re familiar with each other after playing together throughout the summer, and both will major in wildlife management.

“Through the recruiting process, we felt like we always had a great relationship with them,” Luke said. “I’m glad to have them because they are really good U.P. performers; to have them in our program means a lot, because we try to get the best players in the U.P. every year.”

For Bell, his decision of where to play came down to Tech and Northern Michigan University, but the chance to move further away from his hometown was one of the deciding factors in becoming a Husky.

“It’s a good distance where it’s far enough away, but if I need to go home for something, I can. But you still get the college experience,” Bell said of Houghton. “I also felt a better fit with the coaches and players. I liked the program for my major, but the biggest difference was the people.”

Bell will look to make the transition that all U.P. basketball big men have to deal with when playing at the next level — going against players as big or bigger than them.

“Up here, there weren’t many people who matched my size,” Bell said. “Not a ton of people up here are like that, so it’ll be different playing against other taller athletes with quicker feet. It’ll be interesting to see.”

Defensively, Bell hopes to utilize his energy into becoming a more well-rounded defender. Offensively, he prefers to play on the wing and attack the basket, rather than starting on the block, similar to Tech junior forward Kyle Monroe. But Bell admits he has some room to grow to match the former GLIAC Freshman of the Year and First Team All-GLIAC selection.

“He’s a little more smooth and crafty and can get away with more than I can,” Bell said of Monroe. “I just have to try to be more of a cutter and slasher. I can’t shoot like he can, and his fakes are pretty ridiculous.

“It’s exciting. I’m sure I’ll be nervous closer to the season and stuff. If I’m playing, I’ll feel more pressure. It’s good to know that there are a lot of really good players on our team already.”