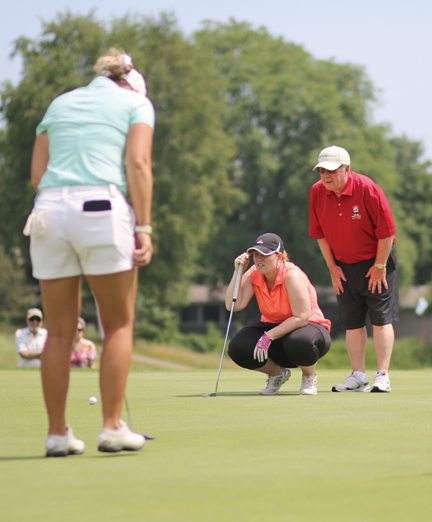 MARQUETTE — The last time the Upper Peninsula Ladies Golf Association championship tournament was played in Marquette was 2003. That’s when a Marquette Senior High School graduate who had just completed her collegiate career took home the title.

Fourteen years later, Kendra Palmer, who now is known as Kendra Anderson and lives in the Green Bay, Wisconsin, area, did it again Wednesday as she outlasted No. 1 seed and defending champion Abby Dufrane in the finals to win her second UPLGA title.

To topple Dufrane, who is a golfer at the University of South Dakota, Anderson knew she had to play well throughout. She definitely accomplished that, making a number of shots go her way that didn’t for some other golfers.

“On one hole, I was behind the green and I just told myself to get it up and down and I ended up chipping it in instead,” she said. “I also think I was able to scramble when I wasn’t playing well.

“That’s what changes the game. When you make bad shots and you’re able to recover from them. That’s what makes the difference and it did for me.”

Dufrane, who hails from Marinette, Wisconsin, felt that she played a great game, but Anderson, who played collegiately at Loyola University in Chicago, was playing her very best and the gap was just too much to overcome.

“I was hitting some good shots, but Kendra played unbelievable,” she said. “I think she was like 4-under on the front nine and I was like 1-under. What can you do when somebody is playing that well?

“I played just the way I wanted to, but she just had the better day. I felt like I was playing great, but nothing wanted to fall.”

Woodworth felt that she didn’t play as well she did the previous two rounds and that cost her against Anderson, who was on a roll all day. However, she was happy with how she played over the event’s four days.

“I was disappointed with the way I started today because I had an opportunity on the first hole and I three-putted,” she said. “I didn’t let it get to me, though, and I tried to stay focused, but there were just some shots that put me in trouble. I would bogey them and Kendra just stayed consistent all the way through.

Johnson, who had an impressive sophomore year for the Division 1 U.P. champion Eskymos, had mixed feelings with how her day went, but it’s almost a sure thing she’ll be teeing off next year in this tournament.

“Today is bittersweet,” she said. “I’m happy that I made it this far, but I didn’t play as well as I could have. My putter just wasn’t working for me today.”

Although each of the younger golfers put forth nice performances over the four days, the final day belonged to Anderson, the “old lady” of the foursome, who took advantage of every chance she got.

When asked which of her two titles meant more to her, Anderson replied that this year’s was sweeter thanks to the support she had on hand.

“It’s more meaningful this time because my daughter was here to watch and because I was the ‘old lady’ of the group with the two college girls and Paxton in the final four,” she said. “It was nice to come out and use my experience to help me win.”

There were finals contested in the other flights at the tournament on Wednesday, too.

In the Presidents’ flight, which included the first-round losers from Monday’s championship flight, Nancy Osier beat out Sue Micklow for that title.

Other flight winners were Cathy Shamion in the first, Laurie Bero in the second, who topped Audrey Caputo; Cathy Clark in the third, Pam Frankini in the fourth, Susie Jacobs in the fifth, Michelle Wagner in the sixth and Dianne Bell in the seventh.