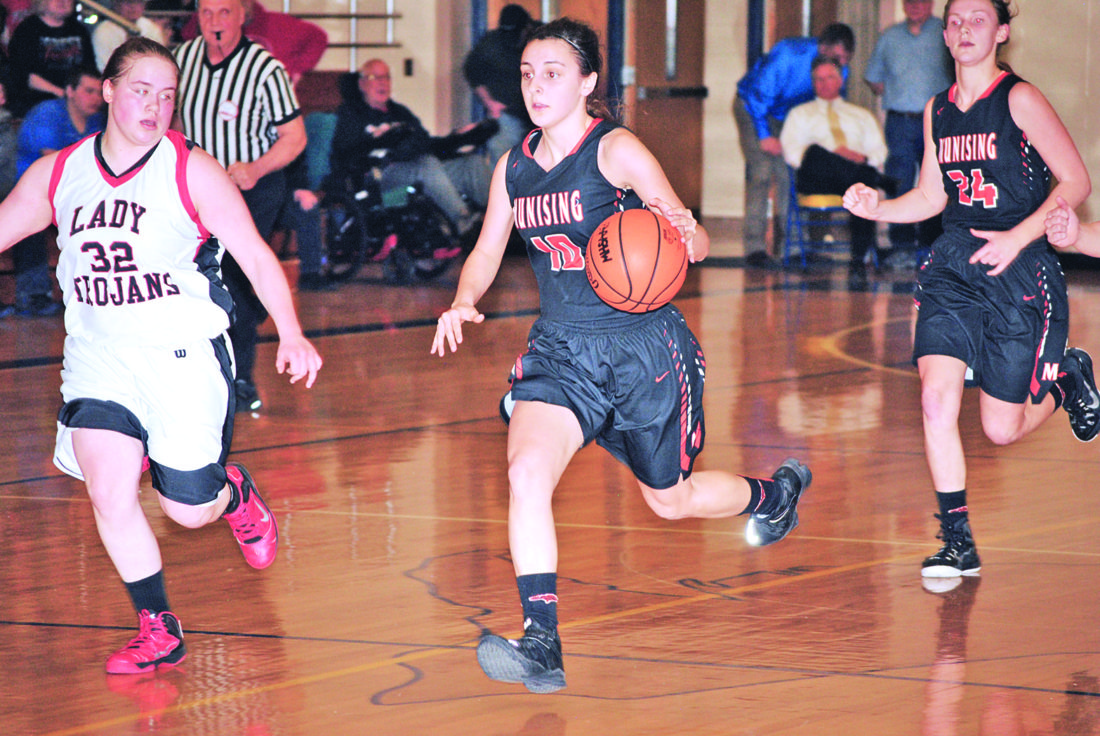 MUNISING — Some basketball teams can only hit opponents with a quick jab, but for the past couple of seasons, the Munising Mustangs girls squad has pummeled teams with their 1-2 punch.

Seniors Frankie Mattson and Marissa Immel have played ball with each other since grade school and they’ve developed some good chemistry on the court over their careers.

That connection pushed the Mustangs to a 20-0 regular season in the season just past, and even though they exited the postseason much more quickly than expected, the talented tandem gave Munising fans a season to remember.

Mattson, 5-foot-8 post player, is known for seeing the court well, powering her way to the basket and grabbing rebounds with ease. She scored more than 1,300 points and nabbed more than 1,000 boards to set school records in both categories.

Immel, on the other hand, is a 5-6 point guard, can calmly knock down jumpers, and is lights out when she gets to the free throw line. Even though she ran the Mustangs’ offense, she still managed to drop in 1,000 points over her career.

They’re vastly different players, but they complemented each other nicely and could make things difficult for opposing defenses.

“I’ve been playing with her for a long time and all four years made things a lot easier,” Mattson said. “We make a good team out there and we had a good season.”

“When people scout our teams, people see that Frankie is a really good player so they focus on her and try to defend her well,” Immel said, agreeing with her teammate. “When that happens, it gives me a chance to step up and help us succeed.”

Both players were recognized for their achievements last month at the Upper Peninsula Sportswriters and Sportscasters Association meeting when Mattson earned a spot on the Dream Team and Immel easily locked up a spot on the First Team.

Both were humbly appreciative of the awards and Mattson wasn’t even aware of the announcement until it broke on social media.

“I didn’t really think about it,” she said with a laugh. “I didn’t even know the picks were coming out and then I got tagged in a Tweet and I was like ‘That’s really cool.'”

Even though they both racked up several awards over their careers, both players put their team before any personal accomplishments.

Immel does it with her attitude.

“I tried to be really positive with everyone,” Immel said. “I tried really hard to help everyone improve their game as well as mine. I want to make everyone better. We had a great amount of success, and this year we could’ve gone farther, but life happens like that sometimes.”

The bond between the two started early as both came from basketball families and once they stepped on the court, things started to flow.

“It’s been really nice playing with someone like Frankie,” Immel said. “It’s always been me, Frankie and (teammate) Bailey Downs since we were little and it’s nice having that support over the years.”

Things are changing, though, as they head in different directions this fall. Mattson hopes to play in college and is looking closely at downstate schools Alma and Calvin colleges. Immel, on the other hand, has decided to call it quits and is going to Michigan State University to study speech pathology.

“My career is over for the most part,” Immel said. “I got some offers from smaller schools, but I’ve always wanted to see what a big school was like since I’m from such a small town. It was a tough decision to make, but it was time.”

Even though their paths will diverge in the Lower Peninsula, the twosome plan to stay close as is the case in Munising where community support for ‘Stang Nation is always at a high level.

“My best friends may be going to different places, but we’re hoping to see each other as much as we can,” Mattson said. “I’m also excited to see what the other girls on the team are going to do next year.”

“I’ll always remember all the fun we’ve had making memories together,” Immel said. “We’ve been best friends for years and I don’t think there’s any reason why (we) won’t be in the future.”

Mattson and Immel won’t be helping Munising knock out opponents next season, but they still will be bound together as Mustangs.