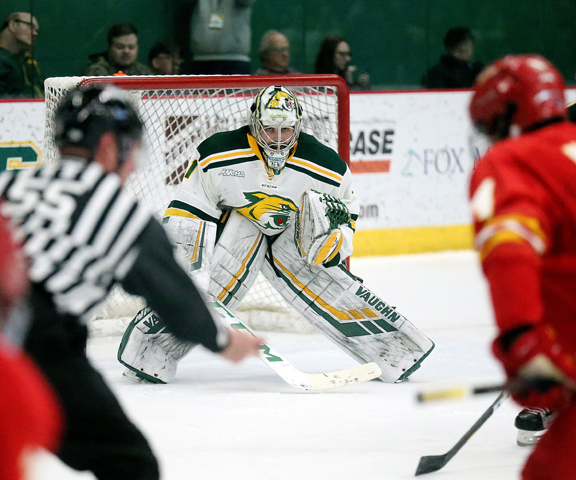 Northern Michigan University goalie Nolan Kent, framed by a referee and a Ferris State skater, bears down as he gets ready for a second-period faceoff in a WCHA game played at the Berry Events Center in Marquette Feb. 1. (Photo courtesy Daryl T. Jarvinen)

On the Net: Full schedule is available on the official NMU athletics website, nmuwildcats.com/sports/mice/2020-21/schedule

MARQUETTE — Northern Michigan University has filled in its final weekend of the upcoming hockey season, which is actually the Wildcats’ opening series of the season in early October.

The Wildcats will travel to Madison, Wisconsin, to take on the University of Wisconsin from the Big 10 on Saturday and Sunday, Oct. 3-4. Game times have not been announced. The series had yet to be determined when the entire schedule was released about two weeks ago.

It is an unusual series in that it won’t be held on a Friday and Saturday, unlike every other NMU series this season except one in early January at North Dakota, which will also be held on a Saturday and Sunday, Jan. 2-3, to avoid New Year’s Day.

The games against Wisconsin renew a recent rivalry between the Wildcats and Badgers, who played eight series against each over seven seasons, splitting games between Madison, Wisconsin, and Green Bay, Wisconsin. NMU had an 8-6-2 record in those games.

The most recent series against the Badgers was played in Green Bay during October 2017, when NMU won 5-4 in overtime and lost 4-0.

This series is one of four nonconference weekends the Wildcats will play in the 2020-21 season.

They also host Boston University of Hockey East the second series of the season on Oct. 16-17 following an off weekend; host Colgate of the East Coast Athletic Conference on Thanksgiving weekend, Friday and Saturday, Nov. 27-28; and play at North Dakota of the National Collegiate Hockey Conference to start January.

Each of those nonconference opponents also has significance to Northern program.

Boston University was the Wildcats’ opponent they defeated 8-7 in triple overtime to capture the 1991 NCAA Division I championship, NMU’s only national hockey title. Northern also played at BU last autumn and tied 4-4 and won 4-3 early in the season.

The Wildcats have only played Colgate one time as they enter their 45th year of play, a 4-1 NMU win on Jan. 4, 1985, at the Phoenix Mutual Tournament.

Northern also has a drought of not playing North Dakota. A sweep by the Fighting Hawks in Grand Forks in December 2013 is the teams’ only meetings since 1997.

And head coach Grant Potulny, entering his fourth year at NMU, is a native of Grand Forks.

The Wildcats play 18 home games at the Berry Events Center among their 36 regular-season contests, starting with the Boston University series.