Former Northern Michigan University hockey player and coach Dave Shyiak, left, talks to an official during a game when he was head coach at Alaska-Anchorage. (Associated Press file photo)

Dave Shyiak has been named associate head coach for the Huskies of the National Collegiate Hockey Conference, the school reported on its athletics website, scsuhuskies.com, on Saturday.

Shyiak most recently had been in the same position, associate head coach, at NCHC rival Western Michigan University for six seasons.

Shyiak, a 1993 graduate of NMU, was a senior captain when Northern won the NCAA title in 1991, scoring six goals and nine assists for 15 points while amassing 36 penalties for 80 minutes that season. 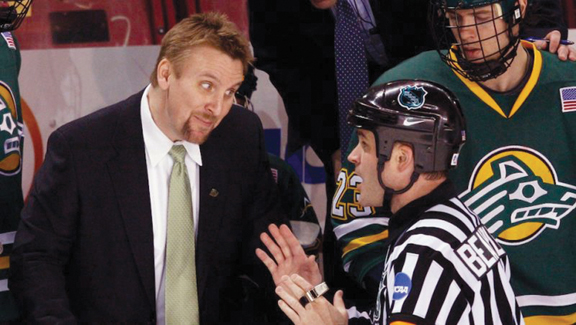 Former Northern Michigan University hockey player and coach Dave Shyiak, left, talks to an official during a game when he was head coach at Alaska-Anchorage. (Associated Press file photo)

Northern also won the WCHA playoff championship and made the NCAA tournament when he was a sophomore in 1989.

A native of Brandon, Manitoba, Shyiak was a player-coach for the Murrayfield Racers of Super League-British Ice Hockey in 1991-92, a student assistant coach at NMU in 1992-93, head coach of the Kimberley, British Columbia, Dynamiters of the Rocky Mountain Junior Hockey League in 1993-94 and general manager and head coach of the Merritt Centennials of the British Columbia Junior Hockey League in 1994-95.

Shyiak began his collegiate coaching career at NMU — starting out as the team’s recruiting coordinator — under head coaches Rick Comley and Walt Kyle from 1995-2005. He rose through the ranks until he became associate head coach in 2002.

He then held the head coaching position at Alaska-Anchorage from 2005-13 and still ranks as the Seawolves all-time win leader during their time in NCAA Division I with 80 wins. UAA also made the WCHA Final Five under his leadership.

Shyiak then left college hockey for a season, working as an amateur scout for the Toronto Maple Leafs in 2013-14.

He returned to the collegiate scene at WMU in 2014. He helped the Broncos earn an NCAA bid in 2017 and home ice in the NCHC playoffs in three of the past four seasons.

Shyiak joins a coaching staff led by Brett Larson, who will begin his third season as head coach at St. Cloud.

“Dave brings a wealth of hockey experience to our program,” Larson said. “His resume is impressive and it includes work as a player, coach and scout at all levels of the game. Our team will definitely benefit from his background in the sport, his ability to assess talent and teach the game.

“I have known Dave for a long time as a rival coach, and I really look forward to having him on our side of the bench as part of our staff in 2020-21.”