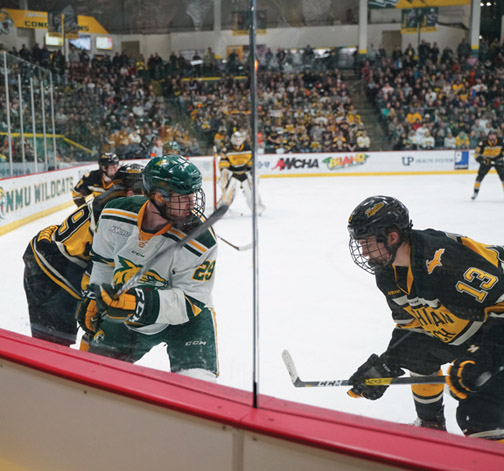 Northern Michigan University’s Grant Loven, front left, goes for the puck along the boards between Michigan Tech’s Logan Pietila, right, and Eric Gotz during their WCHA game at the Berry Events Center in Marquette on Friday. (Journal photo by Kat Torreano)

MARQUETTE — A few weeks ago, Northern Michigan University head hockey coach Grant Potulny insisted that his team would be playing at home during the first round of the WCHA tournament.

It took until last Saturday night, the last game of the regular season, for the Wildcats to prove him right, but they earned that home ice with a 3-2 victory over rival Michigan Tech.

When asked if he regretted making that prediction, Potulny said he didn’t and that part of that was due to the fact that even though the Wildcats went through a skid in February, they didn’t lose any ground in the conference standings.

“I was confident in our guys,” he said Tuesday. “We were in a position where it wasn’t just blind confidence. We went five games without getting a point and didn’t move. So I was pretty sure we could pull it out.”

That win over the Huskies was achieved thanks to a crazy play with a little more than a minute remaining.

On a Tech (19-15-3, 14-12-2) offensive rush, Northern goalie Nolan Kent skated way outside of his net, almost to the blue line, to cut it off. His risky play did the trick as the puck became loose and was collected by Wildcats forward Darien Craighead, who skated up the right boards into the MTU zone and beat Huskies goalie Matt Jurusik five-hole to give Northern the victory.

Kent’s aggressive move caused many Wildcats fans to hold their breath on social media and Potulny chuckled when describing how he felt when it happened.

“You’ve got to trust your players,” he said. “I couldn’t find the puck. After he came out, his stick’s going back and I can’t find the puck. I’m thinking like ‘Is that the puck, because it was in their player’s feet?’

“I thought ‘Is the puck on the stick and it’s just gonna slide in?’ I couldn’t find the puck and then you go the other way and get a chance and Darien makes a play.”

Thanks to the Kent-Craighead connection, NMU will be hosting the Huskies in the first round this weekend, and just like usual, it promises to be an intense, heated and competitive weekend.

Potulny liked how his team played for the most part Saturday, but thought that penalties continue to be an issue.

“I didn’t like the penalties we took. We scored two goals and we go up (to a power play) on a five-minute major and all of a sudden, within 20 seconds, we’re killing a 4-on-3. We talk about it all the time.

“I’ve talked to you guys about it a hundred times. That was something that I didn’t like, but I thought we blocked every shot we could and I thought we advanced every puck we could. We managed the puck.

Potulny also said that getting a win Saturday was important not just because it earned the Wildcats home ice, but that it gave them momentum heading into this weekend, especially since it’s a rematch with the Huskies.

“If they win that game, they won all four games and you’re playing them in their rink,” he said. “That’s a big-time uphill battle. They’ve beaten us three out of four times. That’s great that we have home ice, but they’ve won both games here.

“There’s no 3-6 (seeding) matchup. This is a right even-Steven, slug ’em-out, and if anything, you can say they’ve won three out of four. It’s nice it’s at home and that is the one thing that’s nice because that is a tough building to play in.”

Unlike other WCHA playoff teams, or other college hockey teams in general, the Wildcats know exactly what to expect this weekend.

“You don’t have to do a lot of video on them,” Potulny said. “You know what they are even before the year because coaches and players really don’t change and we don’t change very much. I’m sure they’re not doing much video on us either.

The Berry Events Center will most likely be sold out all weekend and it’s going to have a loud atmosphere throughout, which is what Potulny expects and wants.

“That’s what playoff hockey is about,” he said. “If you look at any rivalry in college hockey, this is as big as any of them with the passion and the amount people care. So when you talk about student-athlete experience, this is exactly what you’re hoping for.”