The good and bad of it: Northern Michigan University hockey team performs well but gets nothing but 4-1 loss vs. Michigan Tech to open WCHA playoffs 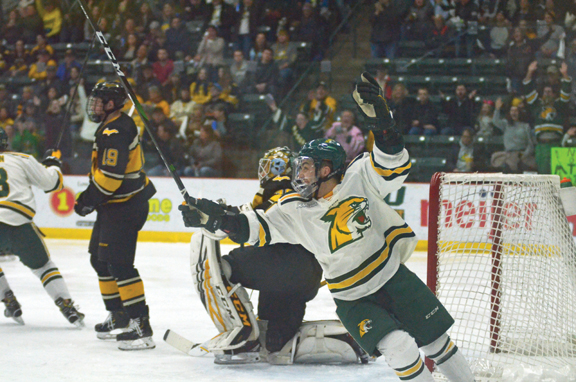 MARQUETTE — There were many storylines going into Friday night’s WCHA first-round playoff matchup between Northern Michigan University and Michigan Tech, but one seemed to loom above the others.

That one was NMU’s struggles at home this year against the rival Huskies, and by the end of the night, that was the only one that mattered as Tech took Game 1 in the best-of-3 series 4-1 with the help of a hat trick from Tommy Parrottino as he scored the game winner along with two empty netters.

Despite the bad outcome, Wildcats head coach Grant Potulny was in somewhat good spirits after the game and actually felt his team played at a good level.

“I thought we played well,” he said. “We had 35 shots. In the second period, I thought that was their only scoring chance, but you’ve got to extend the lead.

“We had four, five, six really good looks right in front of the goalie in the second period. You can’t extend the lead and now all of a sudden, it’s a 1-1 game.

The Wildcats had struggled recently coming out of the gates, but from the opening puck drop, they looked sharp and ready to go. Less than two minutes into the first period, NMU was on the scoreboard as defenseman Hank Sorensen used a screen in front of the Huskies net to snap a shot from the blue line past MTU goalie Matt Jurusik to put the ‘Cats up 1-0.

Less than two minutes later, the Huskies got their first scoring chances from the game as Parker Saretsky tries to beat Northern goalie Nolan Kent by the right post, but the sophomore gloved the shot. Seconds later, Tech’s Alec Broetzman rang a shot off the left post causing groans from the Huskies student section.

With about 9:35 remaining, the Huskies looked as if they’d get another chance, but Wildcats defenseman Mason Palmer made a good defensive play. The freshman got deked around, but managed to spin around and recover in time to block a shot with his stick.

NMU’s last true scoring opportunity came with around 6:40 left when the Wildcats broke on an offensive rush. Forward Griffin Loughran wound up and fired a slap shot at Jurusik that was on target, but the senior stuck his leg out just in time to keep the puck out of the net and keep the Huskies’ deficit at 1-0 going into the second period.

NMU started off the second strong too, but couldn’t get on the scoreboard again. Just a minute in, Luke Voltin skated into the slot and got a good backhand shot off at Jurusik, but it went just over the crossbar. With 17:45 left, Wildcats forward Adam Roeder snapped a shot that Jurusik stopped, but he left a juicy rebound in front of the net. However, Northern couldn’t tap it into the open net.

MTU didn’t get its first decent look until about 13:40 remained when it got a power play, but Keegan Ford’s shot rang off the crossbar. That was the only good look the Huskies had during that man advantage.

At the other end, frustration started to show on the Wildcats’ faces as Loughran had a decent shot sail high and with 2:50 left, Darien Craighead almost beat Jurusik to the right post. The rebound went right to Brandon Schultz, but he couldn’t shoot it in.

With 1:21 left, the Huskies tied it up on a kind of a fluky play. Kent appeared to be in position to make a save on a long shot by Justin Misiak, but Alex Smith skated in front of the shot and it went off him and past Kent to make it 1-1 heading into the third.

“I think it’s tough when you have control of the majority of the play in the period and you can’t get one and they kind of come down and get one,” Potulny said. “It affects you.”

“It’s tough to give up a goal with two minutes left in the second period when you’re up 1-0,” Wildcats captain Phil Beaulieu agreed. “It kind of kills the mojo going into the third, but we’re trying to stay positive always.”

That momentum carried over for the Huskies. With the two teams skating 4 on 4, Parrottino collected a loose puck in the slot and lifted it over Kent to put the Huskies up 2-1.

MTU continued to put pressure on Kent through the first half of the period, but he kept the puck out each time during that stretch. On the other end, Jurusik was doing everything in his power to maintain the Huskies’ slim lead. He denied a Wildcats offensive rush with 9:50 left and then stopped Loughran by the right post with eight minutes remaining.

With 1:12 left, Parrottino clinched the win for the Huskies as he fought his way around two Wildcat defenders to score an empty netter. He added another one for good measure to complete his hat trick with 10 seconds left.