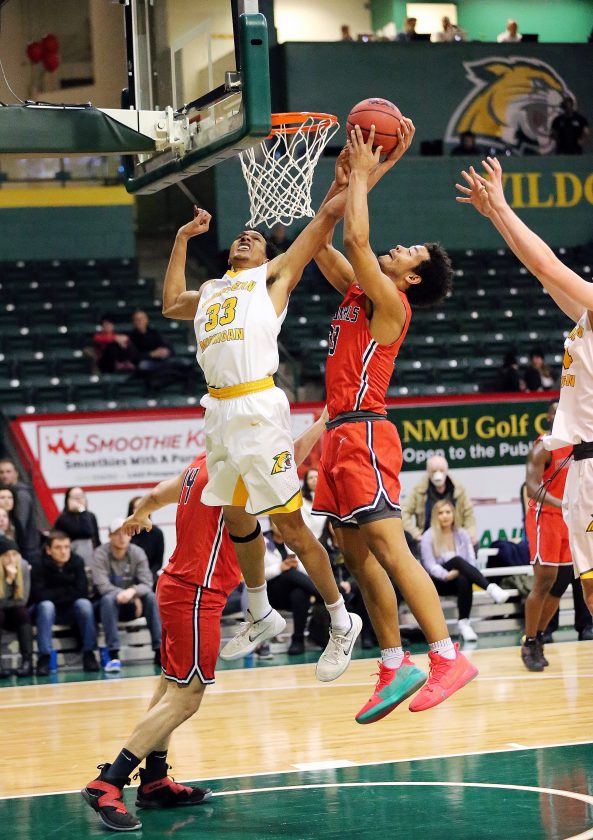 NMU’s Myles Howard and Troy Summers team up to block the shot of SVSU’s Sebastiano Lamanato in the first half Feb. 7, 2019. (Journal file photo)

That’s how he made a name for himself as a high school basketball player in Chicago and that’s what stands out to everyone who’s watched him play for the Wildcats as he broke the men’s team’s career blocks record.

Defense is also something he takes a lot of pride in as he’s made the All-GLIAC Defensive Team the past three years. In fact, he’s been so good on defense he earned a spot on the All-GLIAC First Team despite only averaging seven points per game.

“It was just that type of thing where I had to find a way to get on the court and I was going to do that by any means necessary,” Howard said. “I’m not the best shooter and I’m pretty athletic. I can’t really dribble and things like that, so let me lock in on defense and let me see what I can do on the defensive end.

“Coaches love guys who are tough and gritty and play really hard and play good defense. So I kind of let that be my thing and embraced that role because every team needs that kind of guy.” 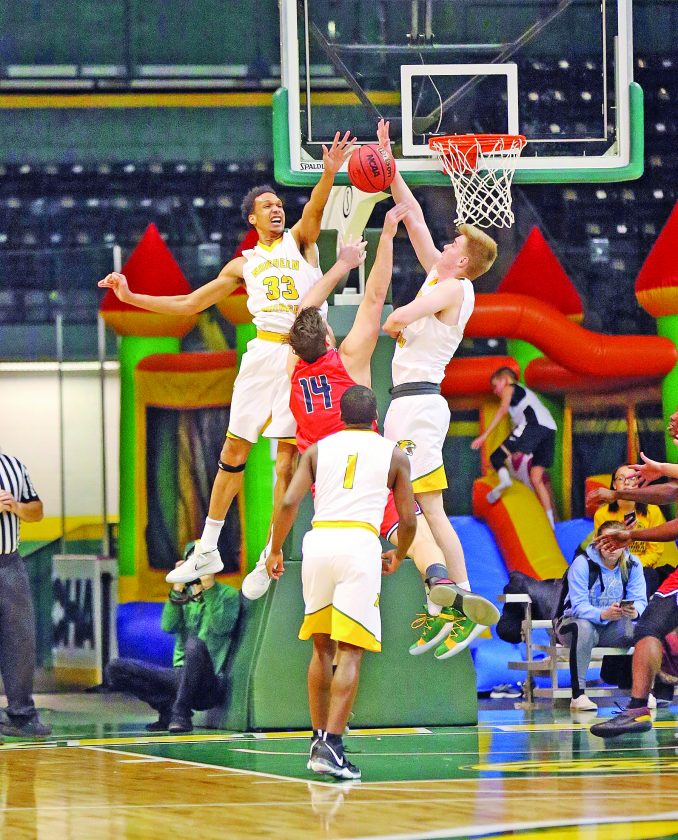 NMU's Myles Howard and Troy Summers team up to block the shot of SVSU's Sebastiano Lamanato in the first half Feb. 7, 2019. (Journal file photo)

Howard definitely caught the eye of one coach — former NMU assistant coach Charles Belt, who recruited him. Howard said it was a bit of an adjustment moving from a huge city to a small college town. However, it didn’t take long for him to make a connection with both Northern and the community.

“It’s a funny story,” Howard said. “It was my last home high school game and Coach Belt came to the game. That was probably my best high school game of my career. I had a triple double with blocked shots and he said he stopped counting once I got to double digits with blocks.

“He thought it was crazy that I could block shots like that. I see this little 5-(foot-)5, maybe 5-6 guy standing outside my locker room after we were done talking with my coach. He’s a little guy and he said ‘I’d like for you to just give us a chance.’ Obviously, I wasn’t getting recruited too heavily by Division II schools.

“I still had Division I aspirations at that time, but eventually, when I was able to come up to the school and meet some of the guys that I would be playing with the next four years, it felt like home. I felt I was surrounded by good people and the community was great in Marquette and my parents really loved it.

“It was for sure an adjustment. The biggest adjustment for me is the food, I feel like. I like different kinds of food and a variety. Marquette has, once you get here, you think there’s nothing here. But once you’re there for awhile, you figure out there’s some nice spots.

“It’s just a friendly atmosphere. Where I come from, that’s not exactly always the case. People aren’t as friendly as they are in Marquette and you don’t get that sense of community that Marquette has.”

He also felt that community when he met his teammates. When Howard and fellow Chicagoan Sam Taylor joined the Wildcats, NMU was trying to turn its program around with Naba Echols and Isaiah Johnson taking the lead. Howard said at the time that the team had “something special” and that he could tell that the program was “on its way around.”

The Wildcats showed that Howard’s sophomore year as they made it back to the GLIAC Tournament for the first time in years and then picked up a first-round victory last season.

However, Echols and Johnson graduated last year, both leaving the Wildcats as top-10 career scorers. With a massive chunk of Northern’s offense gone, it was time for Howard and Taylor to step up and they did what they could.

“In reality, when we were picked 12th (in the preseason GLIAC poll), me and Sam felt like we just wanted to prove everyone wrong and prove that we weren’t deserving of 12th place in the GLIAC because obviously we had the experience, even with the new coach and all these types of things.

“I understand why they picked us 12th, but at the same time we just wanted to prove everyone wrong. That was kind of the chip on our shoulders that we had all year.

“We did a great deal this season, especially given all the circumstances, only three seniors on the team and four upperclassmen total. Playing a lot of new guys and getting adjusted to the new coach and things like that.”

When asked what he’s going to remember most about playing at NMU, Howard said it comes down to two things, a huge overtime win that helped get the Wildcats into the GLIAC Tournament this year and just his time in the area.

“In basketball, the thing I’ll remember most is the Davenport game, my senior night, because it was my parents first time being in Marquette and seeing me play at the Berry,” he said. “And then obviously we won that game. It was really special to me. Off the court, I’ll just remember how the community embraced me throughout my entire time in Marquette.”

And they should because without him, Taylor, Echols, Johnson and the rest of that group, the Wildcats probably wouldn’t be on the path that they are on right now.