Northern Michigan’s Darien Craighead, center, looks for an open pass against Michigan State during their Oct. 11 game at the Berry Events Center in Marquette. (Journal file photo by Amy Grigas)

MARQUETTE — Their college hockey careers may not have ended the way they hoped, but this year’s Northern Michigan University seniors definitely left their mark on the program.

The Wildcats only had three this year, but each of them played a role in helping NMU earn home ice in the WCHA Tournament for the third straight season.

Head coach Grant Potulny reflected a few days after the season ended two weeks ago on both their final seasons and careers, as each was here since he took over the program three years ago.

First on the list is forward Luke Voltin, who had a career-high eight goals and 13 points this season along with helping lead the Wildcats’ strong second-half start in January.

“I thought Luke had the best year he’s every had as a hockey player,” Potulny said. “And I’ve known Luke since he’s been 14. Eight goals, he found his way on the power play. He started playing four-on-four. He gave you an honest hard effort every night. That to me I feel good about. 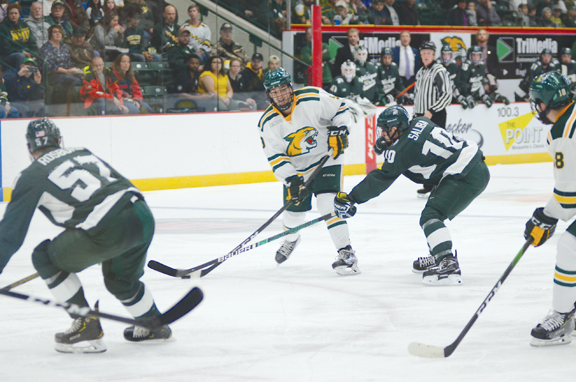 Northern Michigan’s Darien Craighead, center, looks for an open pass against Michigan State during their Oct. 11 game at the Berry Events Center in Marquette. (Journal file photo by Amy Grigas)

“I talked to Luke a little bit during the course of the year, and at times he mentioned that this is it. He’s not going to play after this. He’s just going to move on with life. If that’s what it is, I’m glad the way he went out. He got a chance to score the last weekend of the year and then get an assist this year in the playoffs and go out the way he did.”

Second is Darien Craighead, a clutch winger who became the Wildcats’ go-to scorer the second half of the season. He led the nation in game-winning goals as a sophomore and scored two more memorable ones this year, an overtime winner against Bowling Green State and the winning tally in the final regular season game against Michigan Tech.

“I’m proud of Darien and proud how Darien came kind of full circle with me,” Potulny said. “There was a lot of conversations with us and then there was a point that he got put in the doghouse and he had to find his way out of there.

“And he did. And that goes back to (my) comment about the currency of playing time. When Darien was in a spot that he was not on the power play, he was not playing four-on-four and not playing end-of-the-game minutes, he worked his way out of it.

“There’s other guys that I felt probably deserved to be in the same spot that maybe Darien was in, but they couldn’t go there because we didn’t have any bodies. 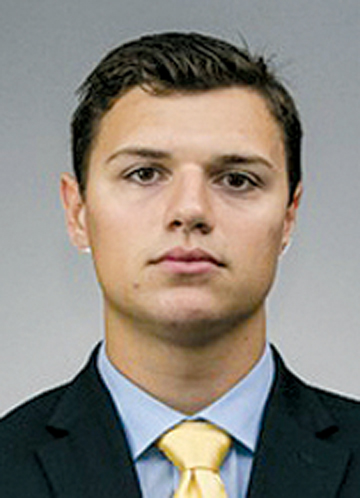 “But back to Darien, he’s a clutch player. I was talking to a pro guy (on March 9) about him and when Darien is focused on being the best version of Darien, he is a heck of a player and we saw that down the stretch.

“He made some sacrifices in his personal life and did the things that are required to be a great player and he had a great finish to the year.”

Finally, there’s defenseman and team captain Phil Beaulieu. Impressively he went from being a walk-on to an All-American as a sophomore, the WCHA Defenseman of the Year as a junior and a Hobey Baker Award candidate as a senior.

Potulny has been impressed as well and thinks that Beaulieu will be remembered as one of the best defensemen in team history.

“I think Phil, if you look back on generations of Wildcat defenseman, he’s going to be in the conversation,” Potulny said. “There’s over 100 points, All-American, Player of the Year. He meant a lot to the program and the best part about the story was that he was a walk-on.

“He walked on here just looking for an opportunity and (was) an amazing find by (former Wildcats head coach) Walt (Kyle). He turned himself into an All-American and those are very few, far-between stories.

“So I’m really proud of all three of them.”