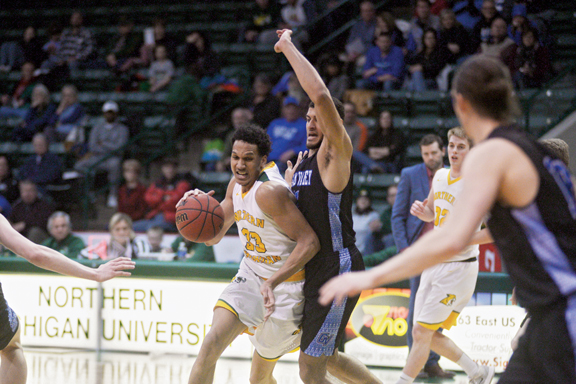 Northern Michigan University’s Sam Taylor gets fouled as he attempts a reverse layup in the second half of a GLIAC game played against Ferris State at the Berry Events Center in Marquette on Jan. 16. Defending for the Bulldogs is Logan Ryan and Walt Keiser, while trailing the play is the Wildcats’ Troy Summers. (Photo courtesy Daryl T. Jarvinen)

Northern Michigan University’s Sam Taylor passes the ball in the first half of a GLIAC game played against Ferris State at the Berry Events Center in Marquette on Jan. 1. (Photo courtesy Daryl T. Jarvinen)

“I felt like they really led us and a lot of the credit for us having a better year than people thought really goes to those seniors.” — Matt Majkrzak, NMU head men’s basketball coach, on seniors Myles Howard, Sam Taylor and Marcus Matelski

MARQUETTE — Heading into this season, many if not most people weren’t thinking too highly of the Northern Michigan University men’s basketball team.

And those thoughts could be justified. The Wildcats had lost two of the top 10 scorers in program history in Naba Echols and Isaiah Johnson to graduation. Both were two-time All-GLIAC First Teamers who helped turn NMU from consistent cellar dwellers to a program on the rise, bringing it back to the GLIAC Tournament for the first time since 2007 in their junior years and even getting a tourney win as seniors.

Not to mention the fact that head coach Bill Sall and both his assistant coaches, Charles Belt and Terry Nash, left for other schools. 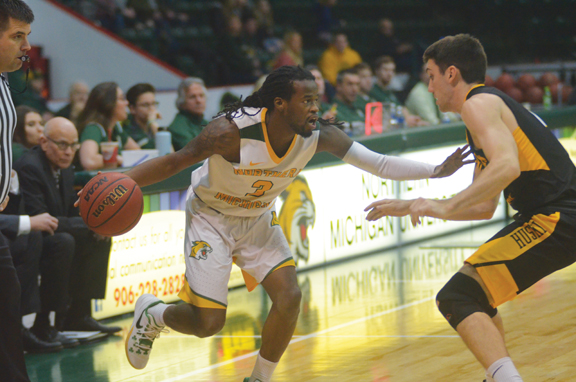 So the Wildcats had to start the year with a new coach, Matt Majkrzak, and a new style of offense.

Still, it was a bit of a surprise to see Northern picked dead last in the GLIAC preseason polls, not just in the North Division, but the conference as a whole.

In the end, though, the Wildcats made it back to the GLIAC Tournament for the third straight season and upset top-seeded Ferris State in the first round before being eliminated by Northwood in the semifinals at Grand Valley State.

“I think the Ferris win was a lot of fun, especially without Myles (Howard),” Majkrzak said last week. “I thought it’d be really, really tough without Myles, and for us to get that win was awesome.

“It’s a great sign that some of the younger kids played well heading into next year. It was a great opportunity for us to get to that final four, where you have the (league) banquet and you really feel like you’re kind of playing in a conference tournament, not just another game. So that was a lot of fun. 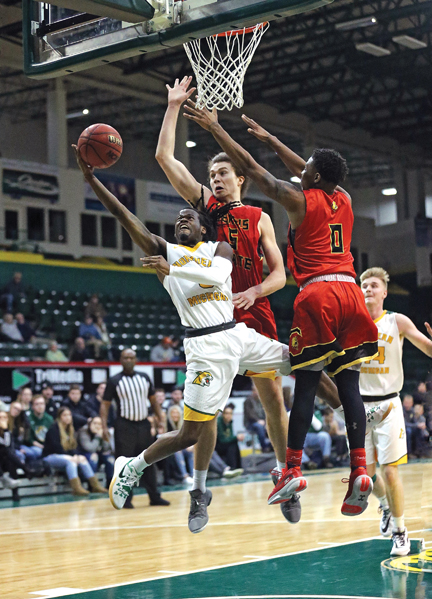 Northern Michigan University's Sam Taylor gets fouled as he attempts a reverse layup in the second half of a GLIAC game played against Ferris State at the Berry Events Center in Marquette on Jan. 16. Defending for the Bulldogs is Logan Ryan and Walt Keiser, while trailing the play is the Wildcats' Troy Summers. (Photo courtesy Daryl T. Jarvinen)

“I thought we played pretty well against Northwood, all things considered. We knew rebounding would be a little bit of an issue with losing your two best rebounders, Troy (Summers) earlier and then Myles at the end.

“We still held them in check pretty well. We just couldn’t make enough shots. And at the end of the day, that’s kind of what happened to us in losses. We didn’t have a secondary way to score the ball at a high level besides make 3s.

“In that, we didn’t have great post play or great drivers. So we kind of were stuck being a little bit one-dimensional this year. And when that one dimension didn’t go well, we struggled to win games.”

When the Wildcats were clicking and winning, a lot was due to their senior class, three-time GLIAC Defensive Teamers Howard and Sam Taylor, along with sharpshooter Marcus Matelski. Howard also set the school’s career blocked shots record this season and made the all-conference First Team.

Majkrzak said all of them played a big role in NMU getting back to the GLIAC Tournament and just being competitive as a whole this year. 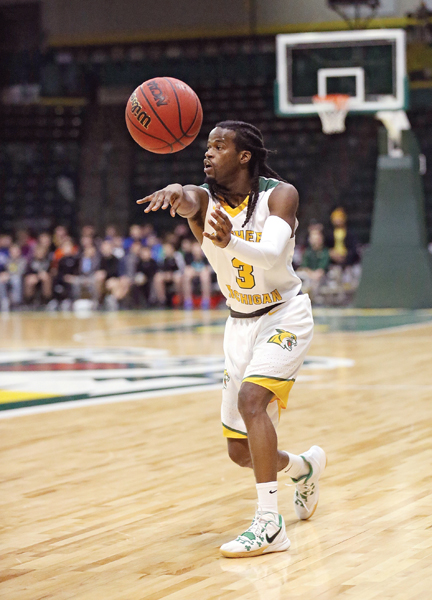 Northern Michigan University's Sam Taylor passes the ball in the first half of a GLIAC game played against Ferris State at the Berry Events Center in Marquette on Jan. 1. (Photo courtesy Daryl T. Jarvinen)

“Myles ends up being First Team all-conference, which is astounding out of a kid that averaged seven points a game,” Majkrzak said. “I don’t know if I’ve ever seen that or if I ever will again. But it was really cool that he got that honor and he also finished first in All-Defensive votes. So we don’t have a defensive player of the year in the league, but he was that. So obviously starting with him, you’re going to miss that a lot.

“I thought Sam, he was kind of the heart and soul of our team, even probably more so than Myles. His competitiveness and his toughness was kind of the engine that made everything go.

“And then the second half of the year, I thought he was a great basketball player. The first half in the first three years, he’s been a great competitor that wins a lot of basketball games, but he really grew as a player, as a passer, as a shooter, as a point guard, and I thought that kind of is what kept us going toward the end of the season.

“Marcus all year has just been consistent with just being solid. And his shooting, like any shooter, he’s going to have some good games and some bad games.

“The thing I always appreciated about him was that he always stayed level and helped our team. Whether it was he was making all his shots or not making shots. He showed up night in and night out and competed. 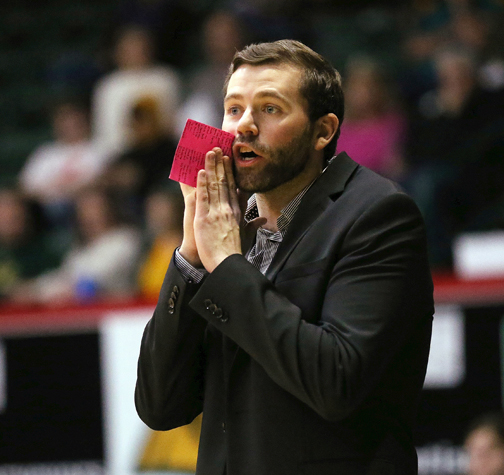 “So we’re going to miss those three a lot. I think next year’s gonna be a whole new season, but this year, it really felt more so their team than maybe any other team I’ve ever been involved with where in a lot of ways, their leadership was what kind of kept us afloat and their experience in the conference was more than I had had. So in a lot of ways, I felt like they really led us and a lot of the credit for us having a better year than people thought really goes to those seniors.”

Losing those three seniors will sting, but Majkrzak feels like he has a solid core coming back, including all-around player Alec Fruin, emerging star Dolapo Olayinka, who had a strong second half, and post player Ben Wolf, who will be relied upon heavily next year with the loss of Howard.

“I think Alec is gonna be just that typical senior guard that’s gonna do everything for us, and then Dolapo, I think, emerged the last 10, 15 games,” Majkrzak said. “He’s one of the better players in the league at the forward spot.

“The guy right now I wouldn’t trade for any freshman in the league and probably very few freshmen in the country is Ben. Big guys take a little longer. Guards can come in and contribute right away, but big guys, by and large, aren’t good players as freshman. So for him to have as good a freshman year as he did and finish as strong as he did, I think is a really, really exciting sign of things to come for him.

“Just athletically and skill-wise, he has the potential to be an all-conference player and high on that all-conference list. So I’m really excited to see kind of what his next couple of months of work and development look like because he’s got a chance to be special.” 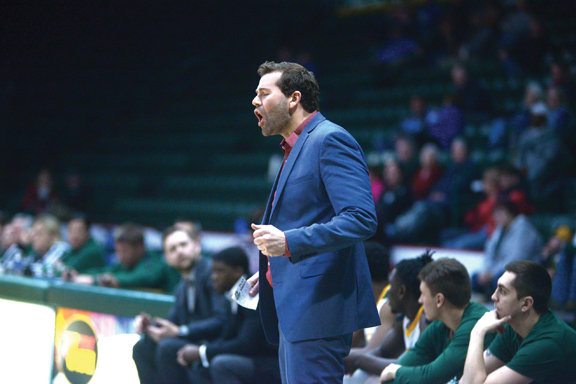 When asked what is the special moment he’ll remember from his first year on the job, Majkrzak talked about the tournament win over then-No. 11 Ferris, the road win over then-No. 11 Grand Valley State during the regular season and when Matelski drilled a game-winning trey at the buzzer to beat rival Michigan Tech in December.

However, it was the Senior Night overtime win over Davenport on Feb. 22 that stood out the most, as there was a lot riding on that game.

“You win those huge road games and I’d take those three wins and stack them up against any three wins that any team has had in the country. They might be the three best trio of wins that anyone has had in the whole nation, but the win with Davenport was the one that we knew we needed to get us in the conference tournament, which set up the Ferris game.

“It was Senior Night. We had just been coming off the worst moment for me of the year, which was losing to Grand Valley in double overtime and some of that kind of stuff. And it told the story of this year’s team, which was everything is going bad. We kind of had some doubt creep in where we weren’t going to even make the conference tournament after a pretty good middle of the year. And we were gonna lose that game by all accounts if you watched the first 36 minutes.

“And all of a sudden, it flipped, and it did so with those seniors. So to me that was kind of the defining moment of our season and also probably the best portrayal of kind of what those seniors have meant to our program and what their legacy to me will be.

“So that was definitely my favorite game and then you get Senior Night afterward and you get to see everyone’s families smiling. I just thought it was a really cool moment and probably something I’ll remember for the rest of my life.”