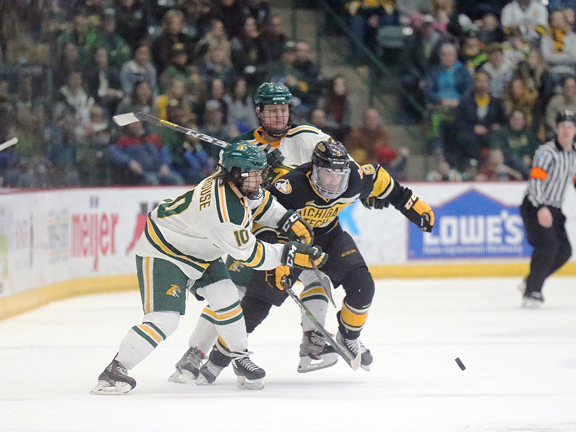 MARQUETTE — Hockey is a game of chances and for a team to be successful, it needs to take advantage of every one that it gets.

On Saturday night, the Michigan Tech squad did exactly that as Logan Pietila got a pass from Justin Misiak and scored 4:41 into the third overtime to defeat Northern Michigan University 4-3 and win the best-of-three WCHA playoffs series in two games to none.

The loss ends the Wildcats’ season with a record of 18-16-4, which had included a 16-11-1-1 mark in league games during the regular season. The Huskies (21-15-3) now move on to the WCHA semifinals to play at regular-season champion Minnesota State-Mankato this weekend in another best-of-3 series.

“They grind it. They grind it out and find a way to get it done. We were injured. We lost our top scorer and that was a big deal for us. Ultimately, the guy that goes on that line is the guy that set up the winning goal.”

Trenton Bliss was that top scorer who was injured in a collision into the boards during regulation time Saturday. He had a hat trick in the regular-season wrapup series in Marquette that Tech won 8-4 on Feb. 28.

“Bliss would’ve been on that line and not Misiak and Misiak sets up the winning goal. I believe things happen for a reason and I’m really proud of our group.”

Northern head coach Grant Potulny also talked about missed opportunities and how the mistakes that had burned the Wildcats over the course of the season continued against the Huskies.

“The thing that’s hard is you play them six times and you outshoot them every time,” he said as NMU had an advantage in shots on goal in five of their six meetings with the shots equal in the first Tech-Northern game on Nov. 22.

“Tonight was the same story. You have the puck in their end and you’re coming, coming, coming and you do something that almost gives them, a freebie is the wrong word, but boom, they’re down the other way.

“The goals that we gave up this year, tonight was the culmination of the same stuff. I’m disappointed in it. As a coach, you try everything you can. The ultimate currency is ice time and when the injury bug hits you, you don’t have that anymore. We had a chance to win the game, wide open net and we shoot it through.”

NMU senior captain Phil Beaulieu also said it came down to chances and that it was heartbreaking to go out that way in his last game as a Wildcat.

“We had our chances, they just didn’t go in,” he said. “There’s a reason for everything, but this one really hurts, especially being a senior. You don’t really look to being here until it’s here. It’s just real unfortunate.

“I think we really put a good effort forward tonight. We really started to kind of turn the corner after that rough patch at the end of the season. I thought if we get this one, we’re looking really good going into (Sunday).

“But I can’t say enough about that group of guys in there. It just doesn’t make sense with the way things go with such a good group we have. It’s just real unfortunate.”

In the first overtime, NMU had a couple opportunities to end the game but just couldn’t find the net.

The best one came with 12:55 left as Joe Nardi had a point-blank shot in front of Tech goalie Matt Jurusik, but his shot went wide. The Wildcats also had a golden chance as the Huskies were called for too many men and Northern got a power play.

However, NMU continued to struggle on special teams and couldn’t cash in and the game went to a second overtime.

The Huskies looked like they had more of a jump in their step in the second extra session and it showed with about 15 minutes left as Tommy Parrottino almost scored his second goal of the night when he poke-checked the puck away from Northern’s Michael Van Unen and got a breakaway. But he was stuffed by Wildcats goalie Nolan Kent as the game eventually went to a third OT.

While the last two regulation periods were full of offense, neither team could manage many quality scoring chances in the first period.

Tech’s best look came in the opening minute as forward Alec Broetzman forced a turnover and got loose on a partial breakaway, but his shot was denied by Kent at the left post.

The Wildcats’ best opportunity came with 12:54 remaining as Mitch Slattery was fed a pass in the slot, but Jurusik got a piece of it to keep the game scoreless.

MTU had a decent look midway through the period as there was a loose puck in front of the NMU goal, but Pietila fell over trying to tap it past Kent and the sophomore covered it in time. The only other decent scoring chance came in the final minute when Wildcats forward Grant Loven attempted a wraparound that Jurusik wasn’t expecting, but he got his skate to the left post in time to keep the puck out.

Less than a minute and a half into the second period, NMU scored the first goal on a great hustle play. In a race to a loose puck in the Tech defensive zone, Slattery got there first and beat Jurusik top shelf. Northern almost struck again two minutes later, but Jurusik just got a piece of his glove on a shot by Caleb Schroer.

The lead didn’t last, though. Shortly after getting his penalty killed off, MTU’s Logan Ganie tapped the puck past Kent during a scrum in front to tie it 1-1 at the 8:11 mark of the second.

Barely three minutes later, Beaulieu kept the puck from being cleared and sent it into the slot. Beaulieu, teammate Luke Voltin and a Tech defender fought for it in front of the Tech net before it squirted free to Darien Craighead, who sniped it past Jurusik to give the ‘Cats a 2-1 advantage at 11:13. But once again, NMU couldn’t maintain its lead as 20 seconds later, Parrottino scored on a breakaway to retie it.

Northern wasn’t shaken, though, as about four minutes later, forward Andre Ghantous skated into the Tech zone, got his stick around a Huskies defenseman and beat Jurusik glove side to give the Wildcats a 3-2 lead headed to the third.

But also once again, the Huskies answered back. Two minutes into the third, Kent made a good save, but the puck landed right behind him. It lingered there for about two seconds before Ganie tapped it into the open net to tie it at 3-3. Midway through the period, Huskies forward Alec Broetzman apparently gave MTU the lead as he rang a shot off the pipe and into the net. But after a lengthy review, Tech was ruled offside and the goal was waved off.

NMU had good chances to retake the lead in regulation, but neither Slattery, Craighead nor Griffin Loughran could score. Loughran came the closest as he attempted a backhand shot in the slot with 45 seconds left, but Jurusik deflected it with his blocker to send the game into nearly 45 minutes of OT.