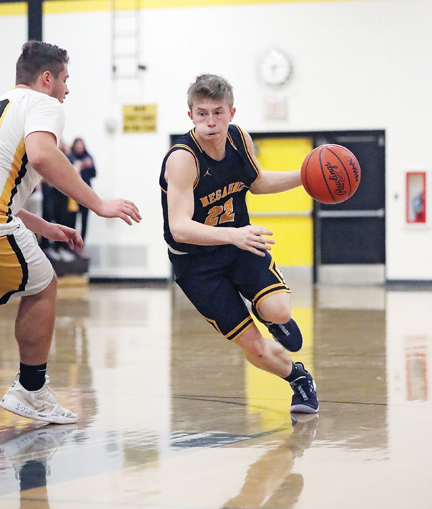 GWINN — A year ago when Negaunee faced Gwinn in an MHSAA district boys basketball tournament, the Miners prevailed by only two points in the championship game last season.

In the rematch Wednesday, things went a lot smoother for Negaunee. For the second straight game, the Miners started off slowly on offense before figuring things out again to break the game open in the second half of a 66-33 win over the Modeltowners.

Negaunee moves on to the district final, where it will host Munising on Friday.

“So it takes some time sometimes to settle in, but I thought we did a nice job after the first quarter in executing what we wanted to execute.”

When asked if he thought opening the game slowly on offense was becoming a problem, Waterman shook it off and just said it’s just part of the tournament.

“No, no,” he said. “I thought (Tuesday) was maybe the most important day in our season. The kids knew we didn’t play our best on Monday night and we talked about ‘Let’s flush that one. We don’t got time to dwell on it and let’s focus.’ And we watched film on Gwinn. Then we had a nice short practice, but a brisk practice, and that kind of set the tone for today.”

Jason Waterman led the Miners with 19 points, while James Harnick had 15 for the Modeltowners.

The game was only 6-6 through one quarter after the Miners’ Jakson Sager sank two free throws, but after that, things shifted in Negaunee’s direction. The Miners built on Sager’s shots and continued on for an 11-0 run to open up the second quarter that included a 3-pointer from Drew DuShane and a driving layup by Waterman.

A layup from Gwinn’s Mastin Love ended Negaunee’s surge, but the Miners took a 22-10 advantage into halftime.

Gwinn head coach Jim Finkbeiner was happy with how his team opened the game, but wasn’t surprised when Negaunee started to get its fast-paced offense going.

“I thought we really executed our game plan,” he said. “We knew that we couldn’t get into an up-and-down floor match and you saw that in the middle of the third to the fourth quarter that we can’t get in that shootout mode with them.

“I thought we really controlled the tempo in the first quarter. Our defense elongated their possessions and then we rebounded really well.

“The hard part is that they’re doing the same thing on the other end. So we got a couple good looks. It was OK.

“The way we wanted to do offensively was to extend possessions. If they don’t have as many possessions, they can’t score. And we tried to keep it tight like that for as long we could do it, knowing that Coach Waterman is going to make adjustments and then we’re going to have to make ours.

“In the second quarter, that’s exactly what happened. We made a few adjustments after he did and they got a little bit of a lead, but we just couldn’t find a way to get the ball in the basket.

From that point on, it was all Negaunee. A steal and layup from Drew Lindberg put the Miners up 31-12 and after Harnick knocked down a trey, Negaunee got seven straight points, including a triple from Will Luke. Later in the quarter, two free throws from Lindberg and a layup by Sager padded the Miners’ lead to 49-20 heading into the fourth quarter.

Even though the outcome had pretty much been determined by then, Finkbeiner liked how his team continued to fight back.

“The gap got pretty big and it’s so easy to just give up and look at the scoreboard and go ‘Why are we even finishing the game?'” he said. “And the kids never have done that all year. The first game we played against Negaunee, it was similar in the second half, and once again they just didn’t quit.

“Our bigs, I thought, played a lot better in that fourth quarter. Yeah, they had some subs in at times and whatever, but it doesn’t make any difference. It’s how hard you’re playing at that point and you’re always learning.

“A lot of those guys are coming back. I’m going to lose four seniors, but that means there’s 11 other guys coming back for this team next year.

“So the fact that they continue to fight back, that does mean something. And they’re learning all the time. So you can use that as a building block and a lesson to learn.”

Now the Miners get to host the Mustangs, who at the time of Negaunee’s win were still in a tough overtime battle with Westwood. Coach Waterman said it’ll be nice to be back at home for their next game.

“Without question, you’re in your own building and I’ve coached at both of those places (Westwood being the other),” Waterman said. “And it’s not fun coming into Negaunee because the team’s good and the building’s hard to win in.”