“It’s a very gritty race and I feel it’s a lot about mental toughness, which I really like about racing.” — Emily Paupore, Negaunee High School senior, on trying the steeplechase when she runs track at Central Michigan

NEGAUNEE — Emily Paupore will be taking her talents to downstate track this fall.

After a lengthy process where she considered several schools, the Negaunee senior decided to attend NCAA Division I Central Michigan to advance her running career.

She’ll most likely be a long-distance specialist for the Chippewas and she’s happy that the weight of that important decision is finally off her shoulders. 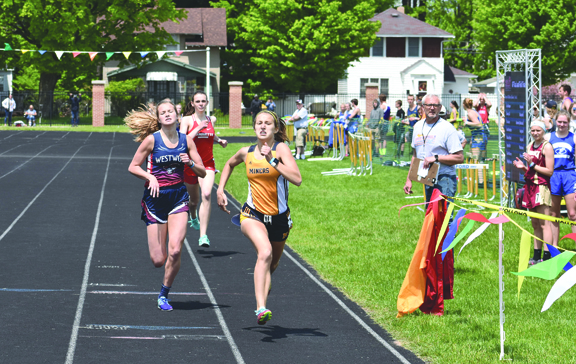 “I was super-duper stressed out about it and it took me a really long time to make my decision and everything, so I’m relieved,” she said with a laugh. “I went on a lot of official visits and I think at CMU, I really just clicked with the coaches and the team and I just really enjoyed my visit there.

“It wasn’t really on my radar when I was in the early recruiting stages, but as time went on, I wasn’t really finding what I really wanted in a team and then I went to Central and it all just kind of clicked. I feel like I’ll be super happy there and it’s just exciting.”

Paupore will also be running right away as a freshman in Mount Pleasant and she’s eager to get her career underway.

“I won’t have to red-shirt there, so that’s super exciting too,” she said. “I’m excited to put on the Central jersey right away. I’m thinking that I’ll probably do more longer distance and I’ll be more a cross country asset, but I’ll also run the (five-kilometer) and the 10K on the track.

“Then, probably, I want to try the steeplechase. I’m not quite sure yet, but there’s definitely going to be an opportunity for me to try it, which I’m excited about.”

The steeplechase can be an especially grueling event that some runners shy away from, but Paupore likes the idea of a challenge.

“It’s a very gritty race and I feel it’s a lot about mental toughness, which I really like about racing,” she said. “So I feel like that’d be a fun event for me. It’s not as much about speed, it’s more about just mental toughness and endurance.

“So I feel it’d be a fun race and a lot of people that do the steeple are girls (who) had previously played like soccer or basketball and they’re multi-sport athletes. So I feel like for my background, I might have a good shot at it. I don’t know yet. I guess we’ll wait and see.”

Choosing a school was tough to do, but another decision that was hard for Paupore was deciding not to play basketball for the Miners this year. She said she missed being on the court at times, but said the benefits of running indoor track meets were better than risking another injury shooting hoops.

“So I was super excited about that and it was really just a good time for me to commit to my training too during indoor and just get used to how things will be in college because I’ll be running all year round.

“Even though I was running in the previous years during the winter, it was just a high risk for me to get injured. So it was relieving to know I had a lower chance of getting injured and I was just really trying to prepare myself for what a college routine would look like.”

Paupore definitely has an idea in mind on what will happen at CMU, but there’s still one question left that she’s wondering about — if she’ll get to race with her Miners teammates this spring.

Thanks to the coronavirus outbreak, schools have closed for the time being and the MHSAA has postponed spring sports as well as any parts remaining of winter sports, until things get straightened out.

Negaunee had some key athletes returning on this year’s girls track and field team and Paupore is still hoping that the track and field season continues, but seems to be willing to accept the fact that it may not happen.

“I’m definitely missing running with the team right now,” she said. “I’m actually sick now, too, so I haven’t gotten to run too much the last couple days now and I’m hoping to come back tomorrow.

“I really do miss hanging out with the team and training with the girls. We were gonna have a super talented team this year, so it was kind of hard to possibly watch this year go away because I think we would’ve had a good shot at U.P. (Finals) and some of the girls on my team, there were a lot of us who were really close to breaking records.

“We have four girls who are running in college next year, so we would’ve really had a good season. There’s still a little bit of hope, but I’m just kind of praying and hoping that the whole situation will turn around.

“Everything happens for a reason. If we can’t run this season, I realize that it’s not the end of the world. Obviously, it’s hard for everyone, but there’s more important things and health is more important than running, or any sport really.”

“I really want to run in the 10:40s in the two-mile,” she said about the 3,200. “I ran a good indoor race in the two-mile, so I’m thinking that will be an achievable goal hopefully.

“And then also break five (minutes) in the mile. I’ve wanted to do that my whole high school career and this year, I’ve felt good in my workouts all winter and I feel like that could be attainable. So I’m hoping for that and also at U.P. Finals, that two-mile record, I’d like to get a little faster.”

For the time being, though, Paupore is just concentrating on getting better and is looking forward to what the future holds.

“That’s what I’ve been really trying to focus on,” she said. “Just focusing on myself and how I can improve for myself and not so much about outside distractions. It’s kind of hard when you’re younger and I feel like I’ve grown in that aspect and just worrying about my own times and where I’m at.

“With this whole decision, I tried to just shut out all the outside distractions and what other people were telling me and really just focus on what I wanted to do. The same thing goes with running, I guess.

“I’m super excited to be running D-I and at the highest level I can. I’m really happy with my decision because sometimes you get caught up in the aura of the school and I was totally trying to do what made me happy.

“I feel like Central is really going to be a good place for me and make me really happy in the long run. And I’m hoping I can leave a good impact there.”

Just like she already has at Negaunee and in the U.P.