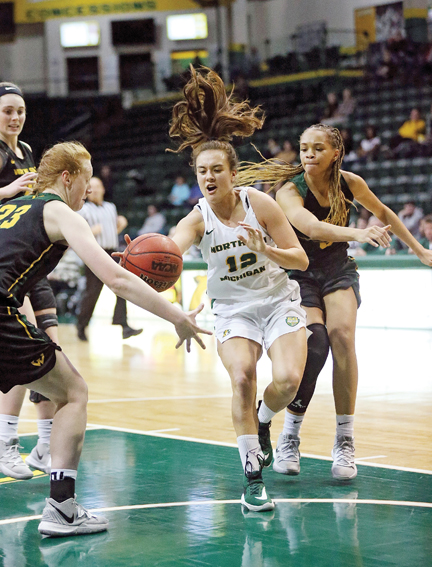 Northern Michigan University’s Erin Honkala drives with the ball during a game against Northwood at the Berry Events Center in Marquette on Dec. 5. (Journal file photo by Corey Kelly)

Northern Michigan University’s Makaylee Kuhn saves an errant pass from sailing out of bounds in the first quarter of a GLIAC game played against Ferris State at the Berry Events Center in Marquette on Jan. 16. (Photo courtesy Daryl T. Jarvinen)

basketball coach, on prospects for next season

MARQUETTE — The Northern Michigan University women’s basketball team had a chance this winter to have a season reminiscent of the one before it.

In the 2018-19 campaign, the Wildcats finished 23-10, upset Grand Valley State in the GLIAC Tournament, lost to Ashland in the conference title game, then got revenge against the Eagles by beating them in the first round of the NCAA Tournament. 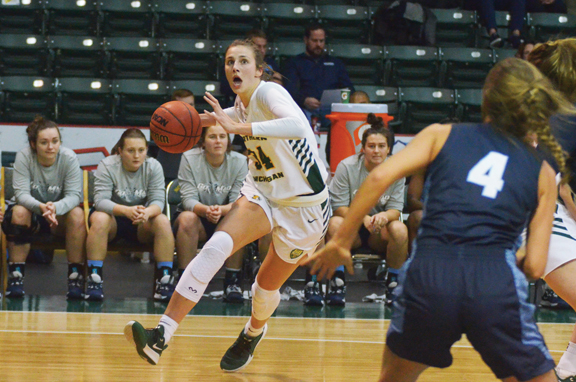 Northern Michigan University’s Erin Honkala drives with the ball during a game against Northwood at the Berry Events Center in Marquette on Dec. 5. (Journal file photo by Corey Kelly)

Going into 2019-20, NMU had potential with Schultz and Smith returning, along with post player Erin Honkala and outside shooter Liz Lutz.

Then injuries pummeled Northern throughout the season and derailed any real chance they had to get back to the NCAA Tournament.

NMU still was able to return to the GLIAC Tournament for the ninth straight year, but the Wildcats were eliminated in the first round at Wisconsin-Parkside, 80-67, on March 3. Head coach Troy Mattson looked back on the game against the Rangers recently and saw it as a game that just got away from them.

“I thought they played really well in the fourth quarter,” he said. “We played really hard. I can honestly say we left it all out there.

“It was a matchup game. Their weaknesses were interior defense and our weakness with them was being able to contain their five guards that they got out there on the court. So we had to play a zone (defense) for the third time this season and it was all against them. 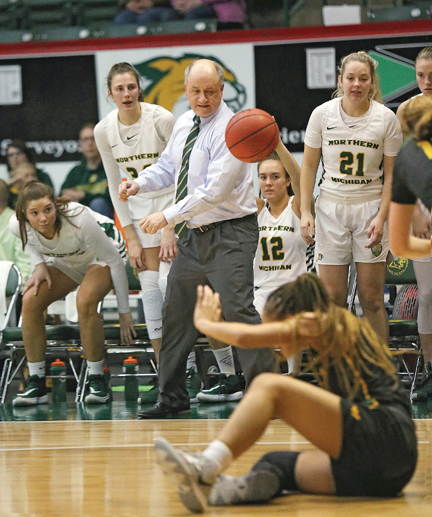 “They were scoring pretty well, but we had a great first half on offense. Probably, maybe our best half on offense, I think we had 38 or 39 points at halftime. We got the ball into Jessica and Erin and they did an incredible job. They actually came out in a zone and Elena (Alaix) and Makaylee (Kuhn) made a few 3s to get us started.

“So we got off to a great start in the game and a couple minutes into the third quarter, we got a seven-point lead. And Makaylee got a reaching foul that she shouldn’t have done and got her third foul.

“And I thought with a seven-point lead, we needed to take her out for a little bit so she didn’t pick up a quick fourth. Erin did the same about a play later and picked up her third, and I made the same decision.

“Whether it was the right decision or not, they made a great run on us at the time and they just continued to play well throughout the whole time. They stiffened up their interior defense on Jessica and Erin, which ultimately affected the game to the point where they got away from us at the end.”

When looking at entire season, Mattson emphasized how his team kept fighting, even though the players were battling injuries. Overall, it was a year of mixed results. 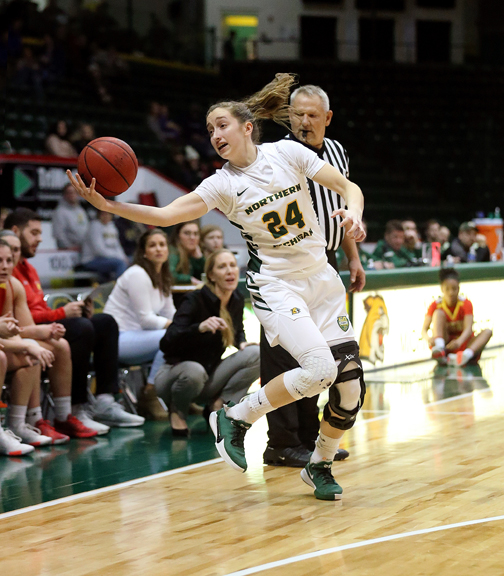 Northern Michigan University's Makaylee Kuhn saves an errant pass from sailing out of bounds in the first quarter of a GLIAC game played against Ferris State at the Berry Events Center in Marquette on Jan. 16. (Photo courtesy Daryl T. Jarvinen)

“We fought hard all year,” he said. “The only thing you can do is fight. I thought we gave great effort every single night, other than one game and I’m not going to mention it right now.

“We beat the teams that we were supposed to beat, other than one game. So that says something.

“We didn’t beat anybody we weren’t supposed to beat and that also says something. That we weren’t able to maybe beat a Michigan Tech or beat Grand Valley, games that we played well in coming down the stretch, but we weren’t able to win those games. So that says a lot about the season also.”

Losing Schultz, Honkala and Smith to graduation is going to hurt, so next year is going to be a very different team than the last couple years. Mattson also thinks that former Marquette Redette Amber Huebner will be looked upon even more as a leader.

“It’s going to be a total adjustment for us as a program because also going out with them obviously is Lexi, not being able to return,” he said. “So we just lost three really major players in our program and I’m going to probably have to replace them with freshmen. So we’ve got a big adjustment period because we’ve been able to rely on those three to do a lot of the work for us over the years.

“Even though they might not be the player as Jessica was this year for us and Lexi has been the player for us a couple of years, we were able to get away with it last year a little bit more because we had people like Darby and Sydney to hold the fort down.

“Now we’ve got a whole reconstruction of our team coming up for the future and I like our young kids, but you don’t win many basketball games with young kids I don’t feel at the college level. We need strong juniors and seniors in our program and probably one of the biggest things that will happen in the offseason is can Liz, who (was) having ankle surgery (last) week, get back to playing at full strength?

“We pretty much played this whole season without our two starting guards in Liz and Lexi and had to rely on some young kids to play in those positions and it really affected the outcome of many games.

“Amber’s a leader and she leads by example more so than vocally. She is. I made her a captain right away last year and she’ll be a leader and she gives us everything she’s got every single day.

“That’s not an issue there and Liz will be a great leader for us also. I just hope she can get back to playing at the potential that she can.”

Mattson said some of his incoming players will also have to reach their potential next season quickly as they’ll be relied on early due to the lack of inside players.

“Well, two of them are going to have to,” he said with a laugh. “We had a good recruiting year, but it all depends on what happens in three or four years for them. We signed the No. 20 player in the state of Wisconsin where the first 19 went (NCAA) Division I and the four after her went Division I.

“She’s 6-foot-3 and she played the No. 1 team in the state about (four) weeks ago and scored 30 on them, but she’s also a freshman and it takes a little longer for inside people to develop at this level. You’ve got to get a lot of strength, but she’s going to be a really good basketball player here someday.

“We signed the No. 27 player in the state (of Wisconsin, Vivianne Jende). After all the Division I kids went through, we got the next. She’s 6-foot-2 and kind of a forward/wing, kind of like Erin. She plays really hard, but again, she hasn’t stepped on the court in college and she has no idea right now. She’s actually (was) going to be playing in the semifinals down in the state of Wisconsin (last) week.”

That was before the coronavirus pandemic caused the Wisconsin Interscholastic Athletic Association to cancel the rest of its girls tournament.

“We kind of addressed that issue, but the issue is we’re losing seniors and we’re replacing them with freshmen. The big thing is how do our young kids that we have as freshmen and sophomores right now develop.

“Makaylee, I think she’s got a chance to be a great player here. She’s throwing up double digits almost every game she plays. She scored 19 against Parkside as a freshman.

“Elena showed a lot this year, I thought. She’s gonna be a junior.

“Emily (Mueller)’s got to have a big offseason and I think Sam (Potter) has to have a really big offseason, and potentially Andrea (Perez), too. People that didn’t see quite as many minutes, but they’ve got to make a step in their game and hopefully, we can work on that here before they go home.”