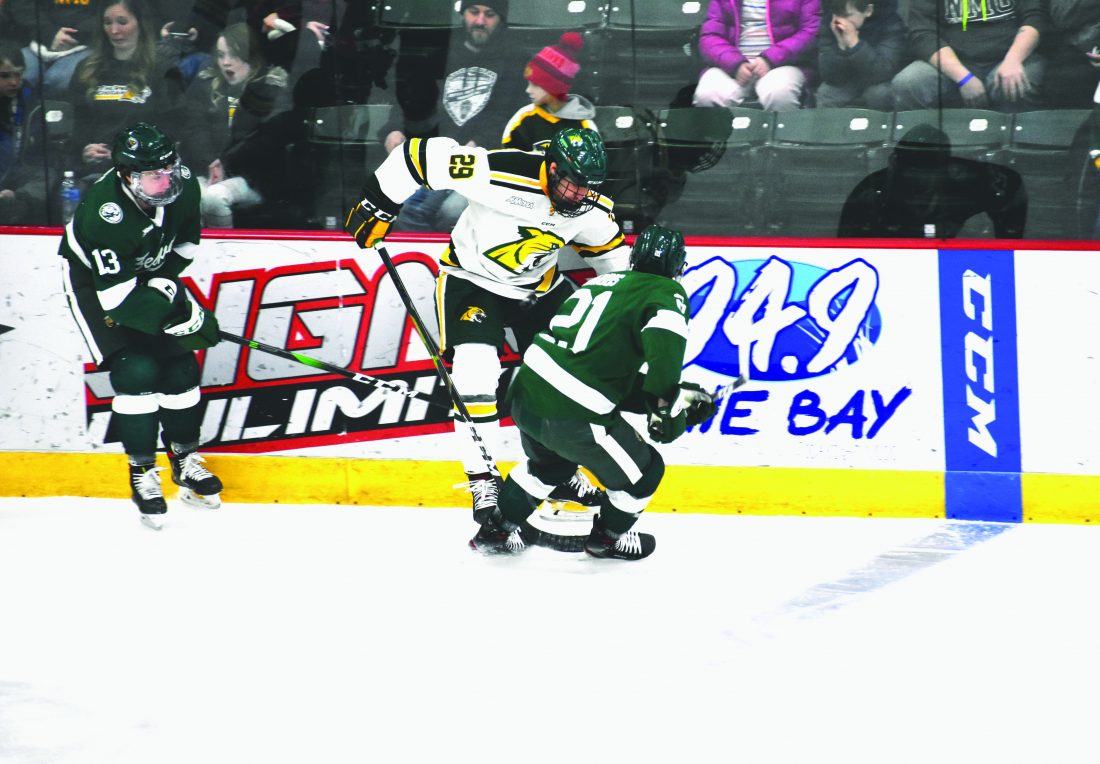 MARQUETTE — If you were to look at the relationships the Northern Michigan University hockey team has had with the conferences it’s played in, “complicated” would be a good term to describe them.

Well, on Tuesday, it started a new relationship and it’s with a league that the Wildcats have known quite well over the years.

Last year, NMU and six other schools announced they would leave the WCHA to form their own league, which at the time didn’t have a name.

Now it does as the league will be named the Central Collegiate Hockey Association, the name of the conference that Northern was a member of before the league dissolved after the 2012-13 season. The new conference will begin play in the 2021-22 season and will include NMU, Michigan Tech, Lake Superior State, Ferris State, Bowling Green State, Minnesota State and Bemidji State — all the WCHA teams located in Michigan, Ohio and Minnesota.

It will leave behind the league’s geographically far-flung institutions — Alabama-Huntsville, Alaska-Fairbanks and Alaska-Anchorage. Each has had challenges in recent years keeping its hockey programs afloat.

The conference realignment and the procedures that go along with the move are led by Dr. Morris Kurtz, a hockey consultant and former athletic director at St. Cloud (Minnesota) State. Kurtz also previously worked for Penn State and helped the Nittany Lions develop their men’s and women’s hockey programs.

In a Tuesday press release from by the NMU athletic department, Kurtz was quoted saying, “It’s been inspiring to lead this group as it is comprised of institutions rich in history and tradition with a strong commitment to academic and athletic excellence.

“As noted from inception, they have a real vision for where they are going with the new league as they focus on improving regional alignment while building natural rivalries and enhancing the student-athlete and fan experience.”

Kurtz also said in the release that the next steps for the league will “include development of league branding and logos and commencement of a search for the conference’s first commissioner” and that the goal is to have that in place by midsummer.

“We have interviewed several consulting firms to assist us with brand development,” Kurtz said in the release. “That process will create some momentum for us as we begin the commissioner search process.

“I am confident that the Central College Hockey Association commissionership presents an incredible opportunity. We will find the right person and have them ready to start leading this group by July 1.”

In regard to why the CCHA name was chosen, Kurtz said, “After extensive discussion and significant due diligence, it made sense to everyone involved to move in this direction. The name conveys the current geographic alignment of our members and the CCHA brand had a tremendous amount of equity and goodwill associated with it.

“What’s old is new again and we look forward to refreshing the brand and identity to fully capture the energy and passion of the institutions it represents.”

The Wildcats have moved back and forth between the CCHA and WCHA over just about all of the Wildcats’ entire existence. In its first season as a program, NMU was an independent and probationary member of the CCHA before fully joining the league for the 1977-78 season. It left the CCHA and joined the WCHA for the 1984-85 season and won its lone national championship as a member of the WCHA in the 1990-91 season.

Northern rejoined the CCHA for the 1997-98 season and stayed there until the league dissolved after the 2012-13 season.

The Wildcats then went back to the “new” WCHA the following season. The current WCHA is made of up teams from the WCHA and CCHA that were left behind after some teams left the two conferences to establish the Big Ten hockey conference and the National Collegiate Hockey Conference.