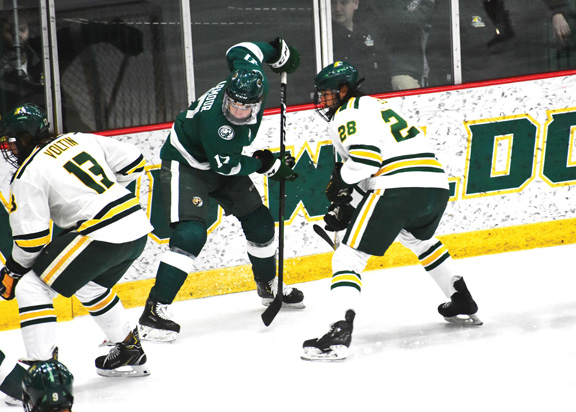 “I can’t even think of a scoring chance (NMU) had.” — Grant Potulny, head coach, NMU hockey

MARQUETTE — Friday was Valentine’s Day and the Northern Michigan University hockey team ended the evening with its heart broken.

The No. 19 Wildcats fell behind in the first period and gave up two goals attempting to kill off a five-minute major penalty as NMU was dealt a 5-0 blowout loss by No. 16 Bemidji State.

“That’s a great question,” he said. “Think back on our last three games. Seven, one, five (goals surrendered). Shut out two nights in a row. They scored two faceoff goals.

“Those are like football plays. There’s no movement, you know who you have. We didn’t cover that. I would have to think we turned the puck over a record amount of times. Their top guys were all over the scoresheet. Ours weren’t anywhere near the scoresheet.

“I can’t even think of a scoring chance (NMU) had. We didn’t draw a penalty. The only one we got was the too many men. It’s a laundry list of things. You can’t coach effort. You can’t coach preparation.

“We don’t have everydayers right now and you can’t show up on Friday when you weren’t there Tuesday, Wednesday. At some point, they can’t be motivated by me, every game, every practice, every day. There’s a laundry list of things that right now that need a fix.”

The first period started off slow offensively as both teams shut down potential scoring lanes. Bemidji got the first decent look with 12:45 left as forward Adam Brady sent a cross-ice pass to Alex Adams, but Adams’ shot was deflected out by Wildcats goalie Nolan Kent.

About 35 seconds later, NMU got its first chance as Darien Craighead looked like he had Beavers goalie Zach Driscoll beat, but a Bemidji defenseman stuck out his stick at the last second and deflected Craighead’s shot over the crossbar.

After Kent denied Bemidji’s Brendan Harris on an offensive rush, Aaron Miller scored about a minute later. A turnover in the Northern defensive zone allowed Miller to collect the puck, skate into the slot and lift it over Kent’s shoulder. Just a few seconds after the ensuing faceoff, Joe Nardi almost had a chance at the other end to tie it for the Wildcats, but Driscoll made a sprawling save to the right post to keep the puck out.

Later at 14:07, Bemidji struck again as Owen Sillinger passed the puck from the left post to a sliding Charlie Combs, who beat Kent high to put the Beavers up 2-0 going into the second period.

Four more goals went in for the Beavers in the second period.

Brad Johnson used a screen in front of the crease to send a shot on net from the blue line that got by Kent and Bemidji was now up 3-0 at 8:05. Then NMU defenseman Hank Sorensen was whistled for a five-minute major for indirect contact to the head-elbowing and the Beavers took advantage. At 14:18, Bemidji’s Adam Brady shot a puck past Kent to make it 4-0 Beavers and the sophomore netminder was pulled in favor of backup John Hawthorne.

Less than a minute after his first goal, Brady got another power play tally to pad the Beavers’ advantage to 5-0.

Even though Bemidji got two goals with the help of Sorensen’s major, Potulny wasn’t upset with that penalty. It was Sorensen’s cross-checking penalty later in the period that irked the NMU bench boss.

“I’m more upset with Hank’s second penalty,” he said. “He didn’t play a shift after that. Was the hit a major? If you watch it full speed, no. If you slow it down, which if you slow anything down, it’s going to look worse than it was. His second penalty was reckless. It was selfish. That’s the one I have a problem with.”

The third period was pretty uneventful. NMU continued to struggle offensively as it was held to just six shots.

Northern will try to regroup today when they face the Beavers again at 6 p.m. Asked what needs to be fixed to salvage a split, Potulny was again honest.

“That’s where we’re at right now. We play teams that have had success during the year and we look like we’ve never been coached. This week in practice, we’re trying to work on our forecheck, our ‘D’ are breaking the puck out like we have Nick Lidstrom, Bobby Orr and Erik Karlsson back there.

“The game starts, we can’t get out of our own end to save our life. Going up the rink in practice, we make plays like crazy. Tonight, I don’t remember us being dangerous more than one or two times.

“So when you play teams that have had success, you have to be able to do it against them, too.”