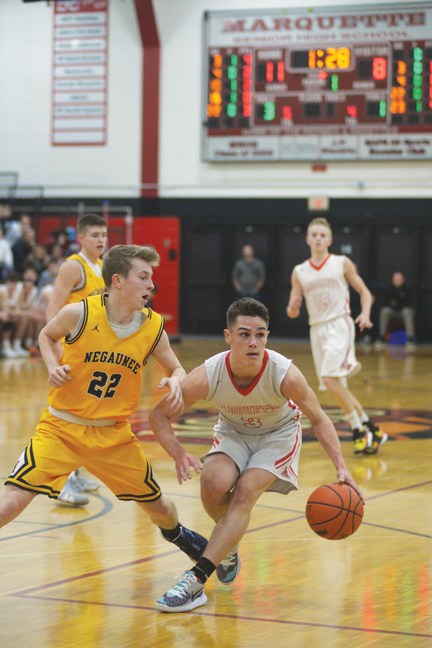 “I talked to them at halftime and said that (Negaunee) is going to go on a run and what you do to respond is going to dictate whether or not we win this game.” — Brad Nelson, head coach, Marquette boys basketball

The Miners claimed that January contest in a 79-73 overtime thriller to collect their first Victors’ Cup in nearly four years.

Since then, the teams had combined for just three losses, with No. 2-ranked Negaunee entering Thursday’s tilt on a five-game win streak and 15-1 overall. Meanwhile, No. 3 Marquette was also off and running with eight straight wins and nearly as impressive a record of 15-3. 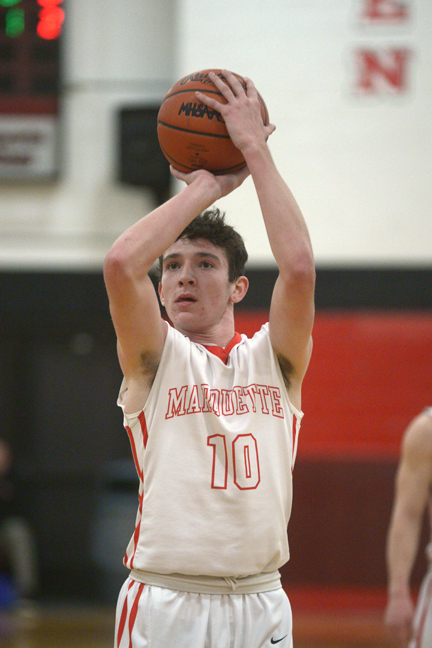 The Redmen had coughed up that January game after leading for most of the night and by as many as 13 points late in the third quarter.

This time around, it was the much the same story, but with a different outcome.

MSHS held the lead for most of the night but managed to close things out and reclaim the Victors’ Cup with a 61-54 triumph in front of a packed Barb Crill Gymnasium on a night where the Redmen honored their six seniors — Drew Wyble, Collin Hicks, John Thomson, Thomas Albarello, Robert Apple and Isaac Johnson.

Marquette head coach Brad Nelson said he had his players spend plenty of time in the film room after the early-season defeat to their rivals. 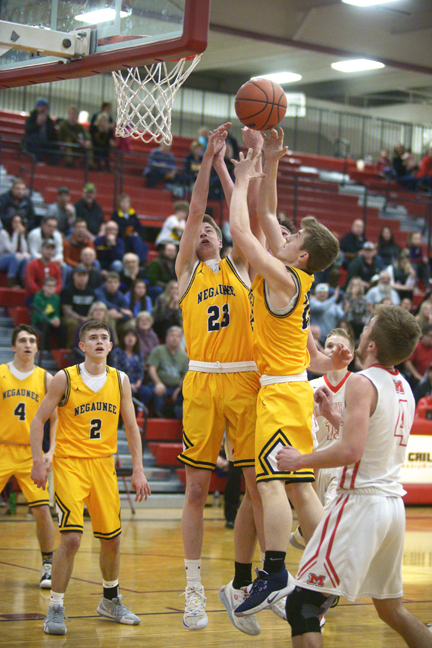 Nelson’s team led 44-30 after the third quarter before the Miners clawed back into the mix by outscoring the Redmen 24-17 in the final eight minutes.

“They were able to get where they wanted a few times in the fourth quarter, but I thought for the 30 minutes that we played, we defended exceptional(ly),” Nelson said. “We knew we were going to have to do that with the three players they had and I couldn’t be prouder of these guys.”

The three players Nelson may have been referring to were Jakson Sager, Drew DuShane and Jason Waterman. Sager had 13 points as DuShane had 12. Waterman, arguably Negaunee’s best player, finished with eight after being held to just one point through three quarters.

“Drew (Wyble) guarded him for awhile,” Nelson said. “Then we got into some foul trouble and John (Thomson) went out to guard him. When you’ve got two seniors who are captains and they say ‘Let me guard him,’ it gives you a lot of confidence as a coach to say go ahead and do your job, and those guys did it.

NHS head coach Dan Waterman paired a rough shooting night along with the opponent coming out firing on all cylinders as the reason for defeat. The Miners shot 46.5 percent from the field while MSHS was better at 62.5 percent.

“You’ve got to give Marquette credit,” Dan Waterman said. “They came out and were really hopping early in the game. That kind of knocked us back on our heels. I’m proud of my guys. They never quit and we had a 19-point deficit chopped down to six or seven at the end.

“We also had a rough night shooting the ball. A lot of that is due to Marquette, but some of that was us missing some shots that we normally make. We missed some free throws that would’ve brought us even closer, but it was a tournament-type atmosphere and those are the type of games that we’re trying to get to prepare us for a tournament run in March.”

Asked if it’s a game to quickly forget about, Coach

“We’re going to watch this, dissect it and cut it up,” he said. “The good thing about playing Marquette is that they punch some holes in you. You’ve got to figure out ways to patch those holes so you can keep going where you want to go. We’ll watch some film, cut it up and figure out ways to get better.”

MSHS took a 16-9 lead after one quarter thanks in part to Kam Karp and his nine-point effort in the opening frame. Thomson opened the game with a triple from the left wing to put some immediate energy into the crowd.

An 8-3 Redmen run to open the second put Marquette up 24-12 before a bucket from DuShane brought the Miners’ deficit back to 10. MSHS led 25-16 at halftime.

A foul-laden third quarter saw Marquette build its lead to as many as 20 points before Negaunee continued to chip back. A 2-point bucket from Sager after a Redmen five-second violation put NHS within 12 at 38-26. The Redmen closed the quarter on a 6-4 run, however, to go up 44-30 after three.

Negaunee had the deficit back to 10 with 3:17 remaining after 1 of 2 successful free throws from Jason Waterman to make it 54-44. Thomson followed with a 2-pointer and the sides continued to go back and forth until it was 60-50 with roughly a minute to go.

Negaunee pulled within seven in the final seconds, but it wasn’t enough to finish the rally.

The Redmen outrebounded Negaunee 25-18 with Ty Lotterman picking up six. Alex Munson had five for NHS.

Karp finished with 23 points to Thomson’s 17 to lead MSHS scoring. Lotterman added 11 while Wyble had six.

Drew Lindberg added eight points for Negaunee while Will Luke chipped in with six. Munson finished with five.

Negaunee visits Westwood (10-7) on Wednesday for the first of its final three regular-season games. The Miners topped the Patriots 42-36 on Feb. 12.

Marquette has nine days off before wrapping its regular season up with a visit to Gaylord (3-12) on Feb. 29.

As the Redmen look to bump their win streak to 10 games and enter the postseason with all the momentum possible, Thomson said there’s always room for himself and his teammates to improve.

“We’ve been rolling with nine straight games,” Thomson said. “Taking every game and building upon it is our game plan. Whatever we don’t do well this game, that’s what we try to fix the next game.” 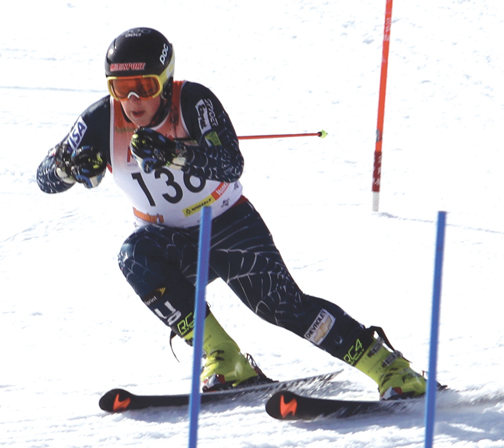 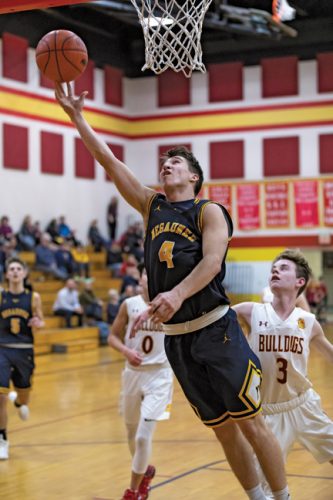 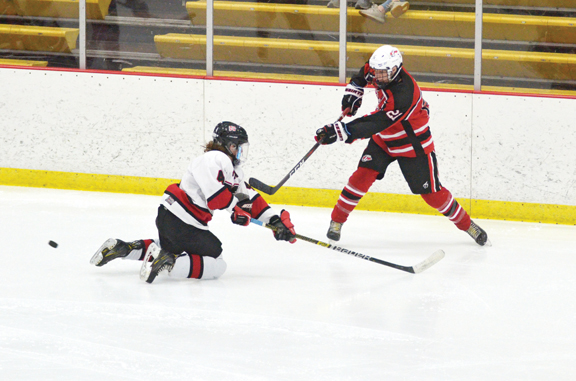 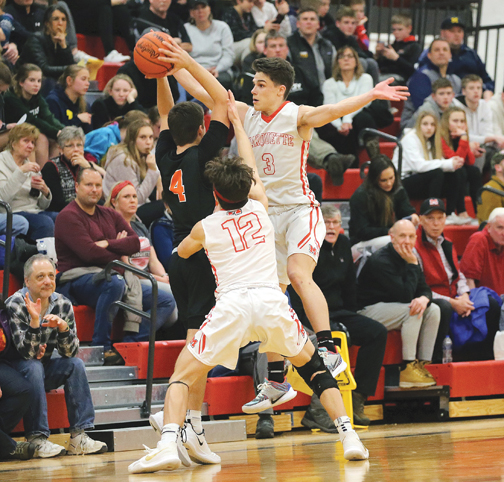 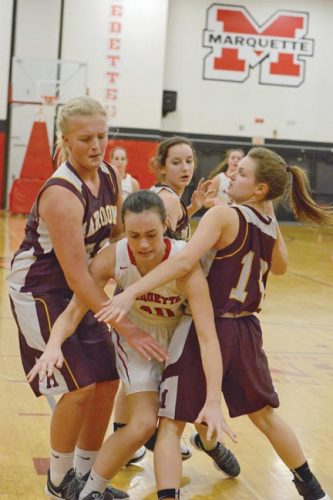