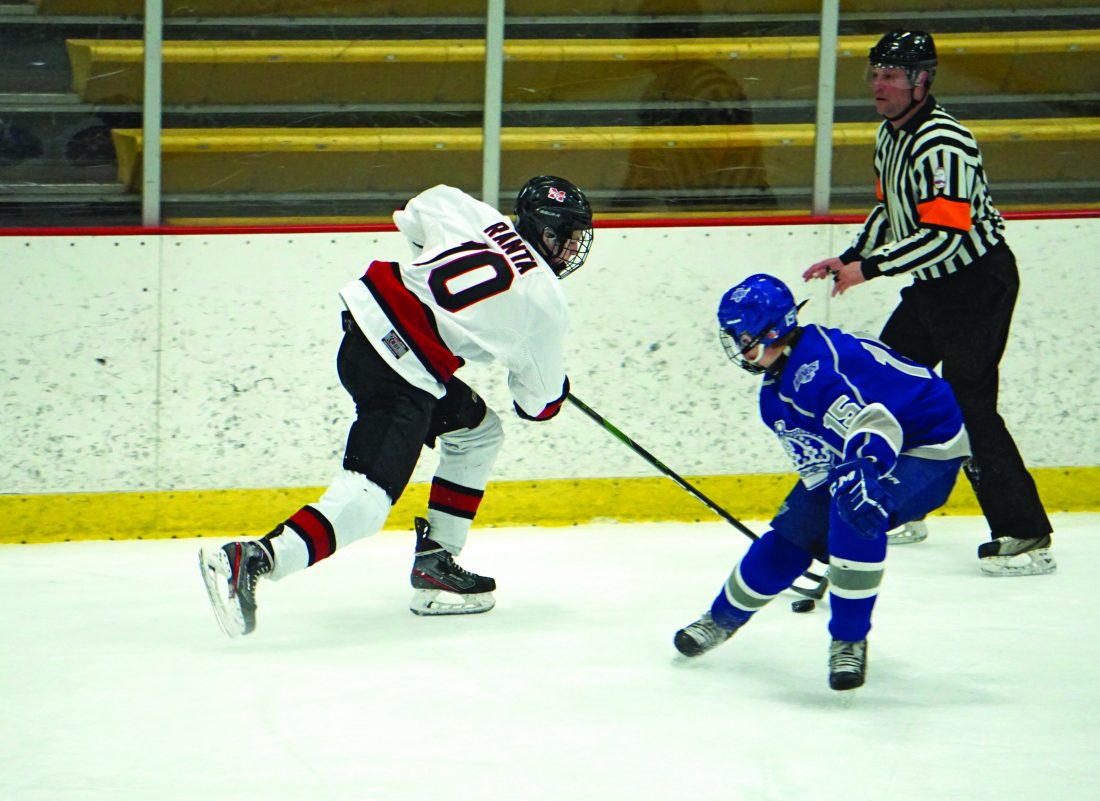 MARQUETTE — 51 minutes and 28 saves later, Liam Beerman could skate off the ice at Lakeview Arena realizing the feat he had just accomplished.

The freshman goaltender for the Marquette Senior High School varsity hockey team shutout the state’s top-ranked team in Division 3, a Calumet squad that held an impressive 17-2-1 record, hadn’t been shutout all season or lost to another U.P. team all season.

Beerman changed all of that on Tuesday night, as he and his Redmen teammates blanked the Copper Kings 4-0, earning their 10th straight victory to improve to 20-3-0 on the year.

Beerman did it all to keep Calumet off the scoreboard, anything from flashing the leather with impressive glove saves to a sprawling stick save on a Copper Kings shorthanded breakaway opportunity in the third period to keep the goose egg intact.

Asked if the big win was a confidence booster for his young netminder, MSHS head coach Doug Garrow said Beerman already has a strong amount of confidence in him.

“He has confidence and I don’t think he needs anymore,” he said. “It’s good for him. He knows he’s a good goalie, he works at it and he also has (Marquette junior goaltender) Brennan (Hakkola) there pushing him. They push each other in practice and Liam knows he’s good. He’s confident in there and I think that showed (tonight).”

While the spotlight was on Beerman, the star of the game himself kept his post-game interview simple and deflected all the credit back to his teammates in front of him.

“It feels really good and it was obviously a good team win,” Beerman said.

The Redmen avenged a 4-3 overtime loss to the Copper Kings back on Dec. 10. Garrow said his players were ecstatic about the win, which came down to making the Copper Kings earn every chance they had.

“I thought we played an outstanding team game,” he said. “They should be happy. They deserve it and they worked hard. I thought we kept Calumet pretty much bottled up. We didn’t really give them too many odd-man rushes, which was key at the beginning. If they’re going to get a goal, make sure they earn it. Don’t turn the ice and cut it in half for them, and I thought we did a good job of that for the most part.”

Discipline was also a key with the Redmen taking just one penalty the whole night. Penalties have been a point of concern in past games for MSHS, and Garrow was pleased his team stayed out of the box for the most part against a Calumet team with a strong power play.

On the opposite end of the spectrum, Marquette had five power play opportunities and capitalized on just one of them, a rebound from Evan Kroll off of a Jacob Peterson shot at 12:37 of the first period to make it 1-0 in favor of the home team. Ansel Frost also assisted on the play.

Kroll was due for the goal after hitting iron earlier in the first period. Owen Riipi also rang one off the pipe beforehand, turning what could’ve been a 3-0 lead into just a 1-0 lead for MSHS after the first. Shots were knotted up 11 apiece after the first 17 minutes.

Dylan Baldwin made the game 2-0 in the second period on assists from Riipi and Jacob Garrow and that was the score that held after two periods with the Redmen taking a 23-18 advantage in shots.

Still up 2-0 in the third, Colin Nemacheck was sent off for a hook, giving the Copper Kings its first power play of the night and a chance to get back into the game. MSHS killed the penalty and scored 22 seconds after the penalty expired. That goal came from Lucas Guertin, who shot the puck into a wide-open net by Calumet senior goaltender Alex Studebaker who was down on the ice and unable to get back into position soon enough. Kroll and Ethan Phillips assisted.

Shortly after that on Marquette’s fourth power play chance of the night, Calumet’s Tanner Rowe stole the puck and walked in on Beerman for a shorthanded attempt. He appeared to have Beerman beat, but somehow Beerman made a sprawling save to keep the puck out of the net and get a rise of applause from the home crowd.

“I just kind of watched it for a minute, and then I reached back and (the puck) was there,” Beerman said of the breakaway.

With just over three minutes to play, Peterson added the dagger, a wrister from the right point, which snuck by Studebaker on the far side to make it 4-0, putting the Copper Kings away for good. Guertin and Garrow assisted on the final goal of the night.

Final shots were 30-28 in favor of the Redmen. Studebaker stopped 26 in the losing effort.

Two games remain on Marquette’s regular season schedule before opening the Division 2 tournament against Kingsford on Feb. 27. The Redmen are looking to improve on last year’s run to the state semifinals.

Asked if he can compare this year’s team to last year’s, Garrow said this year’s group brings a stronger skillset to the table.

“I think this year’s team is more skilled,” he said. “I think we have more depth than last year. We’ll have to see what happens in the playoffs. With last year’s team, the nice thing was that they were just a bunch of guys who loved to come to the rink every day. We have that same kind of team, but I think this year’s team is more skilled and I think we have the potential to make a deeper run in the playoffs.

“Time will tell, things have to go right, you’ve got to play the right way and I thought (tonight) we played the right way.”

Of course any hockey team will need a strong goaltender to carry them through a playoff run, and Beerman is also confident in his team’s ability to make a run to the title.