Redmen take down Gladstone on road 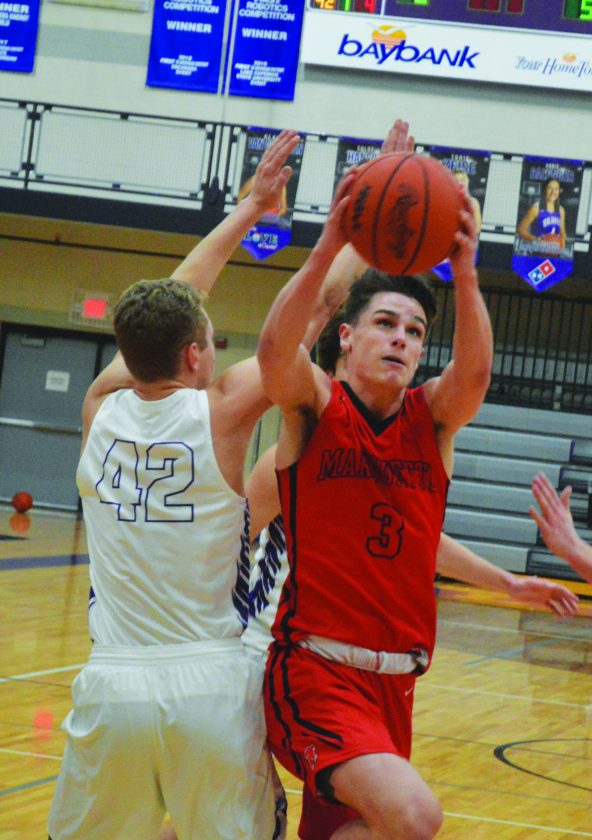 Despite trailing the entire way and falling behind by as many as 14 in the second quarter, the Braves (7-7, 1-4 GNC) were right where they wanted to be after a driving layup by Noah Ballard pulled them within 58-55 with 2:34 left in the game.

“It feels good to get out of here with a win,” Redmen coach Brad Nelson said. “I’ve been coming here for 12 years as the varsity coach and I can count maybe three times I’ve had a comfortable win… There were times throughout the first half where I thought we might be able to make that the case, but give credit to Gladstone. They hung in there, they made plays. I thought (Cam) Ballard had a hell of a game.”

Karp scored 28 points and dished out five assists, doing most of his damage from the free throw line. He went 13 for 14 from the charity stripe, including 7 for 8 in the final two minutes.

“That’s what point guards should do. If you want to be an elite point guard — and I think he is — you gotta end games at the free throw line,” Nelson said. “We do free throw drills every day in practice. It’s one of those things I tell my players in the offseason: ‘If you can’t make free throws, you’re not going to win games.’ Fortunately for us, we’ve got one of the better free throw shooters in the U.P.”

For the third time this season, the Braves put up a valiant effort before falling short against one of the U.P.’s best. After playing No. 1 Iron Mountain and No. 2 Negaunee tough for a half, the Braves took another step forward against third-ranked Marquette. Gladstone trailed 34-24 at halftime, then started the second half on a 9-0 run to make it anybody’s game the rest of the way.

“I told my guys I’m proud of them, because when we went up there earlier on in the season they dismantled us pretty good (84-54 Dec. 17),” Braves coach Dane Quigley said. “As a coach, at this time of the season you always want to get a win… But it’s improvement. I think we played well … not well enough to win, but we’re getting better. That’s what you want to see come March for the (district) tournament. I think we’re stepping in the right direction.”

Cam Ballard tied his season-high with 25 points and added five rebounds. Rane Castor chipped in 16 points and five boards for the Braves, who committed 15 turnovers. Ty Lotterman had 15 points, five rebounds and three steals for the Redmen, who had 14 miscues.

“I think the tell all thing for tonight’s game was turnovers,” Quigley said. “I think we had way too many turnovers, especially in the first half.”

Gladstone, which won the JV game in a 63-60 thriller, hosts Kingsford Thursday. The Redmen host fourth-ranked Escanaba Thursday in a game that will likely dictate the GNC champion. Each team has only one conference loss. Escanaba beat Marquette 63-56 Jan. 7 in Escanaba.

“I thought tonight we definitely didn’t have a conference championship effort, but I can guarantee it will be a different thing on Thursday,” Nelson said.