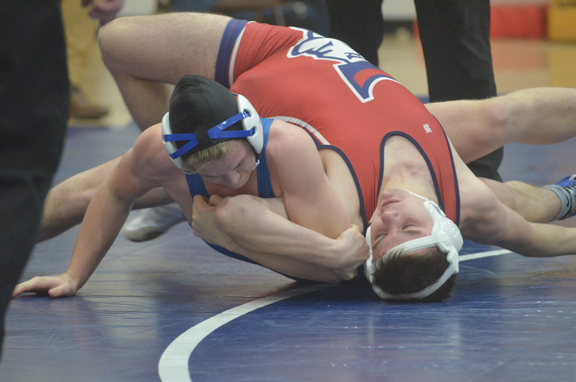 “We just kept persevering and we’ve finally been the healthiest we’ve been all year.” — Dan Carlson, head coach, Westwood wrestling

Ishpeming, Gwinn and Munising joined the Patriots on the mats to battle it out in the semifinal rounds with the championship bouts that followed.

In the semifinals, Ishpeming topped Gwinn 30-18 while Westwood picked up a 48-24 win over Munising, setting up for a Hematites-Patriots final.

Six of the 14 title matches were contested with Ishpeming winning four of those to Westwood’s two. The Patriots had strength in numbers however, earning 42 points via forfeits to claim their third consecutive district title, 54-24.

Westwood advances to the Division 4 team regionals next week, facing Newberry in the semifinals. Should the Patriots advance, they’ll take on the winner of Onaway and Bark River-Harris in the regional final.

Westwood head coach Dan Carlson said it’s been a season filled with adversity, but his team has been able to overcome it due to the leadership of eight seniors.

“We have a good senior group and good leaders,” he said. “They’re the ones keeping this team together and we’ve been fighting through some struggles this year with injuries and illness. We just kept persevering and we’ve finally been the healthiest we’ve been all year.”

One of those seniors is Jackson Vidlund, who pinned Ishpeming’s Preston Collette at 3:32 in the 215-pound division for one of the Patriots’ two contested victories in the finals.

It wasn’t just any old win for the All-American, however, it was his 100th on a high school mat.

“It feels really good,” Vidlund said. “I feel like my whole career has been leading up to this point and I’m really excited to just be one of the people who has the privilege to go All-American.”

Vidlund added that it was special to earn that 100th career win in the districts. He also spoke about leading by example for his younger teammates.

“We knew we had the advantage with the numbers and we came in and wrestled really well,” Vidlund said. “Everybody did their job.

“We try to just push as hard as we can and hope the rest will just see that and follow our lead.”

Dawson Delongchamp followed that up at 160 by downing John Bleau III at 1:56, while at 285, Ethan Sigala pinned Westwood’s Adam Snyder 30 seconds in.

Ishpeming head coach Connor Ryan said it was the best performance for his Hematites this season, and he has high hopes for the future with a more mature group returning.

“We basically wrestled at the highest point we have to this date,” he said. “It’s only upward and onward from here. In the next two years, you’re going to see big things from Ishpeming.”

While being optimistic for the future, Ryan is also going to miss his four seniors who include Owen Morton, Alaric Martin and Kyle Ericson.

“Our seniors this year have come on stronger than any other year in the past,” the coach said. “I’m excited to see what they can do at the individual tournament.”

Individual districts kick off on Saturday with each of Thursday’s four teams and 11 more slated to compete at Westwood High School.

The Patriots will then shift focus to next week’s team regionals. Out of the three other teams in the bracket, Carlson said he expects Onaway to be the toughest.

“We don’t see Onaway a lot, but we remember from last year what they were doing and we’ll prepare for their stuff,” he said.