MARQUETTE — Northern Michigan University can boast a 2-1 record for the first time in their young lacrosse program’s history after sweeping Illinois schools Lewis and Quincy at home over the weekend.

After a 17-11 season-opening loss to McKendree, also an Illinois institution, the Wildcats bounced back with a 15-4 victory over Lewis on Friday and 16-4 triumph over Quincy on Sunday.

All three matches were played in the Superior Dome in Marquette, a place the Wildcats won’t see much of until April as six of their seven matches in March will be away from home, starting with a game at Colorado-Colorado Springs next Monday.

On Friday, NMU’s Madeline Bittell scored that rarest of hat tricks, a natural hat trick where she scored three in a row, during the first 7:07 of the game. She gave the Wildcats a 3-0 lead that turned into a 9-1 bulge by halftime as she also scored her fourth goal before finishing the night with five.

Also scoring in the first half for Northern was Aleya Speas, Shannon Walus, Ellie Bahr, Katelyn Mongold and Graison Ringlever. Bittell also had an assist, while Speas and teammate Amber Hope each had two in the first half. 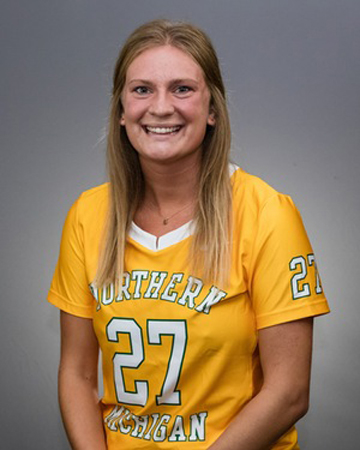 While Lewis struck first to start the second half, NMU then pounded in four in a row to make it 13-2 with 13:22 left. The teams traded goals down the stretch for the final margin.

In addition to Bittell scoring in the second half, Speas had two more in the second half for three total in the game, while Hope, Emily Renfrew and Tess Kostelec also put in second-half goals for Northern. Angelica Bogden had two assists after halftime to give her three for the game.

Goalie Cam Stilson had to make just two first-half saves in the NMU net, while Aliyah Smukala had five in the second half. NMU forced Lewis to make 11 stops between their two goalies.

On Sunday, the Wildcats notched just their second-ever winning streak, matching one they had on the road last season in late March.

They did it by being even more dominating in the first half than they were on Friday, jumping out to a 12-0 halftime advantage as Stilson saved all three shots she faced. Renfrew picked up another NMU natural hat trick, scoring three in a row over a nine-minute stretch that started at about the midpoint of the first half.

Ringlever, last year’s team scoring leader, also had a hat trick by the time the game was 10 minutes old, two coming on free position shots and the third unassisted. Marina Wilson also had two goals in the final three minutes before halftime, with the balance of first-half goals scored by Speas, Bahr, Bogden and Kostelec.

Also in the first half, Bogden had three assists and Bittell two, both on Wilson’s markers.

Quincy opened the scoring in the second half, but Northern answered with three in a row to make it 15-1 at the midpoint of the half.

Ringlever, Bittell, Bahr and Wilson had NMU’s second-half scores as Smukala again came into play goalie for the second half and made three saves.