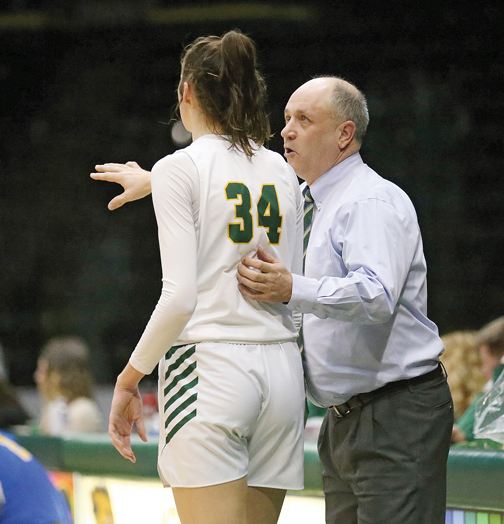 MARQUETTE — To say that the Northern Michigan University women’s basketball team is in rough shape might be an understatement.

The Wildcats (10-11, 7-6 GLIAC) have been hit hard by injuries and have battled sickness for the past couple of weeks and are basically limping their way through the final stretch of the season.

Last week, NMU dropped in 71 points in a road win over Saginaw Valley State, but the lack of depth was on display Saturday as the ‘Cats struggled to hit 40 in an eight-point loss at Northwood.

“All in all, we were about as happy as we could be with the weekend,” Northern assistant coach Chloe Tompkins said Tuesday. “Obviously, we would’ve liked to get the sweep and we were really looking to get the sweep.

“But with just how injured and sick we are right now, the girls played really hard. (GLIAC North Player of the Week) Jessica (Schultz) had an incredible weekend, a career-high 26 (points) Thursday and 20 on Saturday. As a senior, we need her, especially to really put some of the scoring on her back. She’s delivered every single night for us, so that’s huge.

So we’ve been really happy with the way she’s been playing and some of our underclassmen, Emily (Mueller) has been kind of stepping up for us, so that’s been good. Obviously, Erin (Honkala) went down Thursday, which is tough for us. She gives us a lot offensively and defensively, but as a whole, we’ve kind of moved on to this weekend and understand that we need to get a sweep.”

Tompkins said both Honkala and freshman guard Makaylee Kuhn are going through MRIs this week to help determine their status, but she emphasized that player safety is the team’s “No. 1 priority.”

“We’re not going to put anyone on the court if it’s going to risk them getting more injured,” she said. “The girls are playing really well defensively, which is what we hold our hat on.”

Despite that loss to the Timberwolves, the Wildcats are still in third place in the GLIAC North Division and have a chance to gain ground as the ‘Cats face second-place Wisconsin Parkside (12-9, 9-4) Thursday before getting Purdue Northwest (6-15, 5-8) Saturday. Northern was dealt a heartbreaking loss by the Rangers earlier this year on the road, so it’s hoping to bounce back from that.

“Thursday against Parkside will be a tough matchup,” Tompkins said. “We’re a tough matchup for each other. They run a pretty difficult offensive set, but we are working on, right now, our defensive plan. It’s our No. 1 priority, how we’re going to stop them.

“Purdue Northwest is going to be a big game for us as well. They’ve got two really strong freshman guards (Savaya Brockington and Anjel Galbraith) who are really tough to defend. They’ve gotten a lot of scoring opportunities in different ways they score around the basket. Our length really bothered them last time we played them, so we’re hoping that our ability and our length along the guards and in the post will give them some issues as well.”

The Wildcats tip off against Parkside at 7:30 p.m. Thursday and 3 p.m. Saturday against PNW.