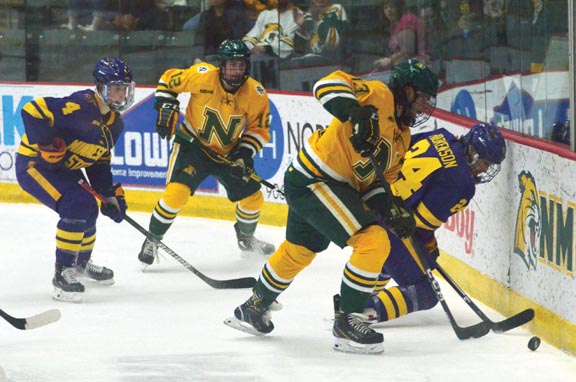 MARQUETTE — At this point in the season, every series is important for college hockey teams.

But this weekend is especially important for the Northern Michigan University squad.

The No. 15 Wildcats have won three in a row and are coming off a home sweep of Ferris State that clinched a spot in the WCHA playoffs.

With that task out of the way, now it’s time to worry about playoff positioning. NMU (16-8-4, 14-5-1-1 WCHA) is alone in third place, but is hoping to climb its way into second. To do that, it needs to get at least some points this weekend at WCHA leader Minnesota State-Mankato.

That won’t be easy as the No. 3 Mavericks are good nationally in all major team statistics — first in team defense, fifth in offense, fifth on the power play and third on the penalty kill.

Basically, MSU is one of the most complete teams in the country and NMU will have to be at its best.

“You’ve got to win the special teams battle,” Wildcats head coach Grant Potulny said Tuesday. “They’re so good defensively. When you think about Mankato, everybody thinks about how offensive they are, and for sure they can score with the best of them.

“But they don’t give you anything. You don’t get any freebies. You think about ways you can score goals and it’s power play. Even what they just went through, the four-game stretch, the goals they gave up, they were power plays or they were shots from the point that the goalie couldn’t see or (were) deflections.

“So special teams (has) got to be good and we’ve got to win the ‘half-court’ game. Whatever happens in the neutral zone to me can be an area that can kind of lull some people to sleep, but we have to win our end and we have to win their end.

“We’ve got to stop the puck and we’ve got to have sustained time in their end that we’ve been really good at lately. Because we’re scoring and we’ve averaged four goals a game since we played Mankato, and our power play is at 12 percent. So we’re doing it 5-on-5 and doing it in the end zones, and this weekend, it’s going to be just as important.”

The good thing for the Wildcats is that MSU has proven to be beatable the past few weeks. In fact, Alaska-Anchorage managed to steal a tie against the Mavericks last weekend at home (MSU got the extra point in the 3-on-3 overtime). The week before, Mankato split with second-place Bemidji State, too.

More importantly, Northern has shown it can keep up with Mankato and even beat them as the ‘Cats handed MSU only its second loss of the year right before the holiday break in December.

NMU is hot, coming off a strong home sweep of Ferris — both scores 5-2 — as well as a successful weekend at Alaska-Fairbanks the weekend before.

“A lot to be pleased with, especially Saturday (against the Bulldogs),” Potulny said. “I thought the special teams were better. Areas that we were loose on Friday were cleaned up for the most part on Saturday. I think we talked a little bit Friday night, it didn’t feel like a 5-2 win. Saturday did. I felt we were in control of the game from start to finish, so it was a good effort.”

Since the Wildcats beat Mankato at home, they’ve been sharp at both ends of the rink, swept a then-ranked Bowling Green State team, got a tie against then-No. 1 Cornell and firmly entrenched themselves in third place.

While NMU trails second-place Bemidji by seven points, the Wildcats have two games in hand — a potential six points — on the Beavers and two or four extra games to play compared to the rest of the league’s top five.

“Confidence is high,” Potulny said. “The other thing that I think is important to know is for whatever reason, the first couple of years, we haven’t had a chance to play a team above us in the standings the back half of the year. We’ve always played people below us.

“Last year, for the end of the year, we played (Michigan) Tech and Lake (Superior) State and they were ahead of us going into those weekends, but it wasn’t a point where wins against these teams can really drastically change a lot of the national outlook, a lot of the outlook in the league.

“So we have a great opportunity and we’ve always kind of been hoping and wishing and ‘Boy, we’re playing good, it’d be nice to play somebody like whoever.’ Well, here’s our chance and we’ve got to make do with it.”