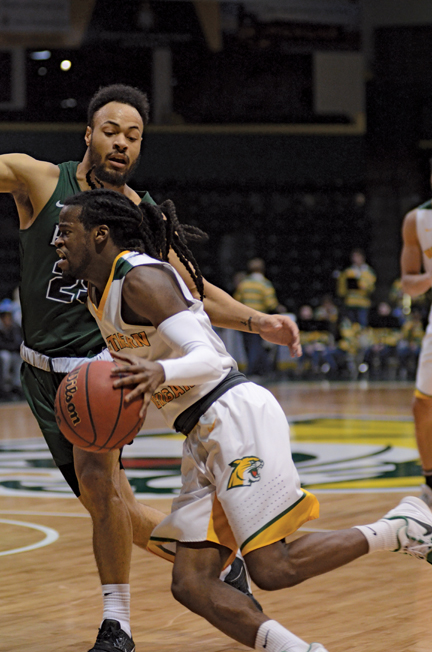 MARQUETTE — While basketball is definitely a team sport, it was Myles Howard’s night Thursday at the Berry Events Center.

The Northern Michigan University senior broke the Wildcats’ career blocks record, which is now at 213, along with scoring 15 points and snatching 13 rebounds as NMU defeated Wisconsin-Parkside 55-43. Alec Fruin led ‘Cats scorers with 17 points.

“It (the record) means the world to me,” Howard said. “I’ve always blocked shots from the time I was in high school to obviously my senior year in college and I told (former NMU) coach (Bill) Sall, when he was here my freshman year, that I was going to defend and rebound, and obviously my defense is a lot of blocking shots.

“I actually didn’t know I was that close to the block record coming into this season and everyone is telling me ‘You’re getting closer and closer,’ so obviously it’s in the back of my mind every game.

“But to finally have the record, it’s like a special moment, and the way it happened with a double-double and a block against (Joey) St. Pierre, who played really well against me at Parkside, it just felt great.”

“I think I’ve called him the best defender in the nation enough times now that almost every game I’m surprised because we keep putting him in different positions,” Northern head coach Matt Majkrzak said. “In the past, he kind of did one thing really well, but he’s probably sacrificed a lot of blocks this year in order to play more of the way kind of we want him to play.

“So for him to do it in a game where he has a double-double and us to win, it’s such a special moment and the way it happened, it felt perfect in a lot of ways. I couldn’t be more proud of him. Obviously, he’s a huge part of everything we do and we wouldn’t be anywhere near where we’re at without him.”

Majkrzak said his team needed this win after getting handed two losses on the road last week.

“We don’t know what ways they’re going to be relevant, but I have a feeling that down the stretch here, every game is gonna mean something to the group.”

The first half didn’t start off well for the Wildcats as Parkside came out of the gates hot and whenever NMU had an answer, the Rangers would knock down another shot.

After Northern’s Noah Parcher scored on a fast-break layup, Parkside’s Brandon Hau hit a triple and Vinson Sigmon Jr. dropped in a floater to put the Rangers up 19-14.

The Rangers built their lead to eight at 24-16 on a 3-pointer by Ramar Evans, but then the Wildcats started to turn the tide. Fruin started the rally with a trey, Howard made two free throws and Sam Taylor stole the ball and put in a layup to cut Northern’s deficit to one.

With 1:30 remaining in the half, a three-point play from Howard gave the ‘Cats their first lead at 26-24. After Parkside’s Jonah Matulle tied it, NMU’s Marcus Matelski sunk a floater and Dolapo Olayinka calmly knocked down a triple to beat the buzzer to give the Wildcats a 31-26 advantage at halftime.

NMU kept the run going in the second half, getting six straight points. Two of those were Taylor free throws to push the Wildcats’ lead to double digits at 37-26 with 17:19 left. Parkside didn’t go away, though, as it went on a 11-0 surge, including a trey from Jonathan Morrobel to tie it 37-37.