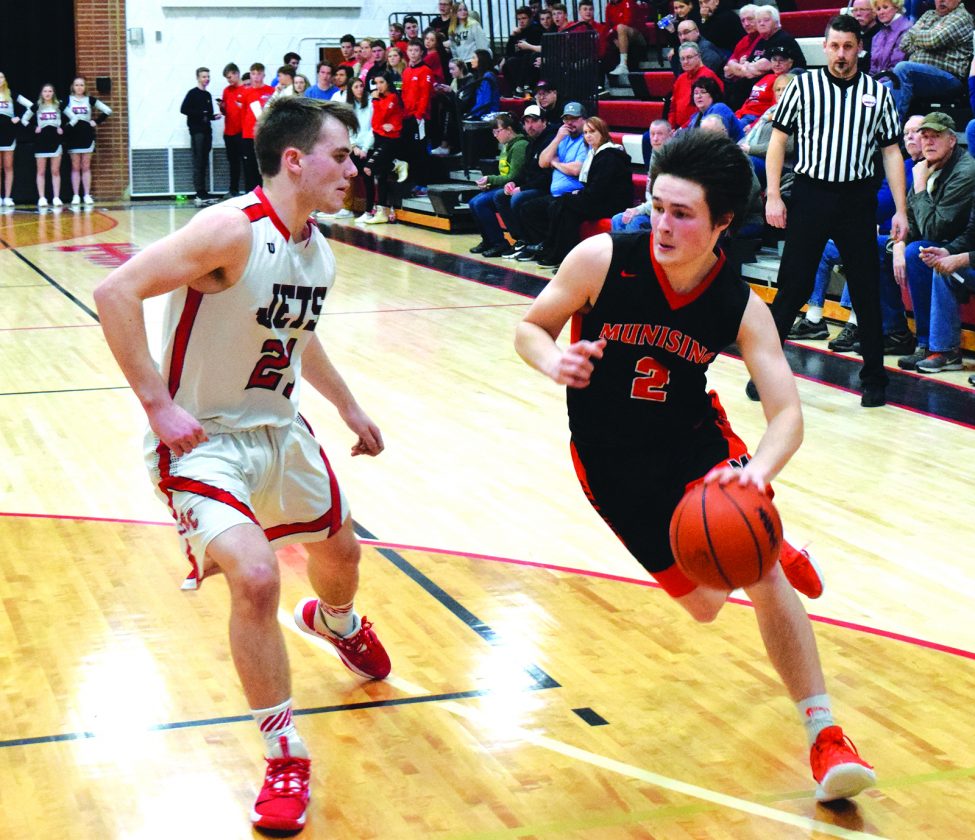 POWERS — The Munising boys basketball team put another one in the win column Tuesday night, going on the road and shutting down North Central for a 69-40 Skyline Central Conference victory.

“Luke Gorzinski had 17 points in the first half, so it was pretty much shut him down in the second and make them focus on someone else,” Munising coach Terry Kienitz said. “They’ve got a lot of good shooters, though, so you’ve always got to defend the arc against them.”

Gorzinski then went on a 9-2 solo scoring run to give the Jets the lead with 2:24 remaining, but the Mustangs responded with a 13-2 run to take a 21-11 lead at the end of the first quarter.

“We had a couple ideas going in, and they kind of squelched that with their individual on-ball and rotation defense,” Jets coach Mike Malone said. “They played really good team defense tonight. We had a lot of trouble getting past them. We were trying to get to the rim, but it didn’t seem to work out for us.”

“We kind of gradually pulled away from them in the first half,” Kienitz said. “The talk at the half was that the lead wasn’t safe, and we’d have to expect more pressure. We just had to keep doing what we were doing. We just knew that lead wasn’t enough against a good team. (The players) took it upon themselves to stop any runs, and it was fun to watch. You’ve always got to love when there’s strong defense.”

The Jets were held to just five points in the third quarter and eight in the fourth.

“I told them not to hang their heads over this loss,” Malone said. “There was a lot of good stuff in this game for us. There were just some things that (we didn’t execute properly).”

Austin Killips led the Mustangs with 20 points. Jason Cornish and Jesse Duran both added 12 and Kane Nebel chipped in 10.

“We really do have the team for (scoring),” Kienitz said. “We’re capable of having four guys in double-digits, moving the ball around and not letting them double-team and take advantage of that. It’s so great to have that option.”