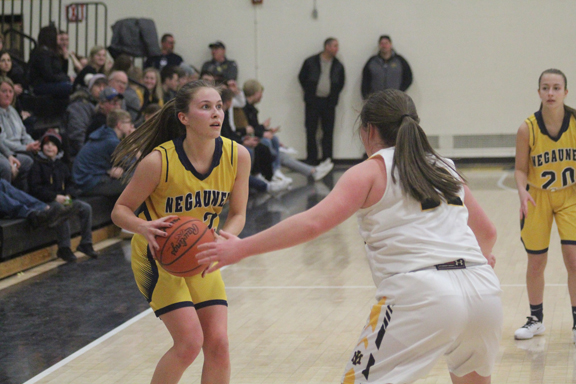 GWINN — Emily Curtice threw down 21 points to help the Gwinn girls basketball team to a 55-46 win over visiting Gladstone on Thursday.

It was the Modeltowners’ second consecutive victory to improve to 11-4 after leading the Braves from beginning to end.

“We led for the entirety and they tied us up once at 27-27,” Gwinn head coach Ben Olsen said. “Emily Curtice is playing some really good basketball, some of the best I’ve seen in my eight-year career. She had 10 (points) of her 21 in the fourth quarter. We ended up going small and putting her in the post and she came up big for us.”

Marissa Delmont chipped in with eight rebounds and seven assists for 13 points.

“Marissa did another phenomenal job running the point,” Olsen said. “We also had huge contributions early on from Tianna Taylor but (she) ended up getting into foul trouble.

“Megan Ruokolainen made two big 3s trying to pull (Gladstone player) Megan Crow out of the paint. Halle Beauchamp did a great job defending Crow as well. It was a complete team win and we played a really good Gladstone team tough.

“We had one bad stretch at the beginning of the third quarter and other than that, we played a very clean game.”

The Braves dropped to 5-11 after suffering their fourth straight loss. Crow led Gladstone scorers with 15 points.

At Iron Mountain, the Miners caught fire in the second half to earn Mid-Peninsula and West PAC wins.

The Miners, leading just 31-27 at halftime, outscored the Mountaineers 21-8 in the third quarter to go up 52-35 entering the final period.

“I was really pleased with my team’s effort,” IM coach Katelynn Grenier said. “I thought we handled their pressure well and attacked the basket.”

Claire Mongrain led the Mountaineers with 19 points and four steals.

“She played her heart out tonight and worked hard on both ends of the court,” Grenier said of Mongrain.

Iron Mountain (1-15) is at home against Manistique on Monday.

At Munising, Mustangs coach Matt Mattson said this game was an improvement even after Munising lost its eighth straight.

The deficit for Munising (5-12) was six points after three quarters, with the Nordics leading 36-30.

At Republic, the Hawks (0-16) hung in for most of the game before the Speed Girls (1-14) took over in the fourth quarter for their first win of the season.

At Harris, the Broncos (9-7) were dominant, not allowing the Cougars (1-15) to have any double-digit quarters.