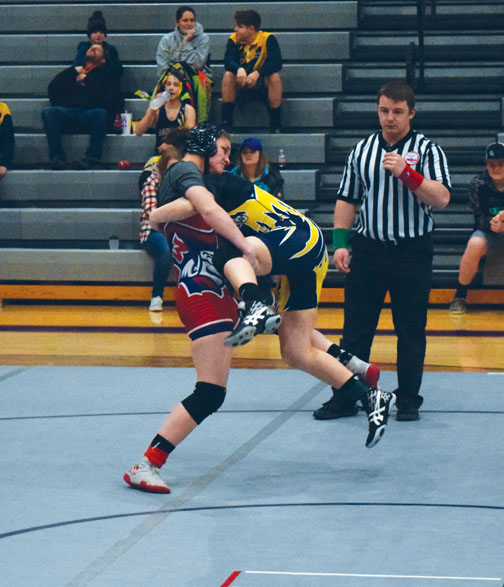 GLADSTONE — The Gladstone Braves lived up to their favorite’s role here Saturday, earning the Mid-Peninsula Conference wrestling title with 180 1/2 points.

First-year M-PC entry Bark River-Harris was runner-up at 142, followed by Westwood with 114. Negaunee was a close fourth with 111, Ishpeming fifth with 76, Manistique sixth with 74, Iron Mountain seventh with 60 and Gwinn eighth with 22.

Sophomore Brett Boudreau (285) provided the Braves with their third title, overcoming a 7-2 deficit to pin Ishpeming senior Ethan Sigala at 2:21.

“I had a real sloppy first period,” Boudreau said. “I basically felt good and was able to ride him in the second period. I wanted to work on top and got a pretty good chicken wing.”

“I think the early takedowns set the tone,” Brazeau said. “Having won the M-PCs last year gave me confidence coming in here. I knew what to expect.”

“I wanted to keep my arms tight,” Solis said. “He wrestled tough. I’ve pinned him every time, but today he came out firing.”

Gladstone junior Peter Noblet reached the 215 final where he got pinned in 1:26 by Ishpeming senior Alaric Martin, and Braves’ senior Lane Matzke (112) lost by pin to Iron Mountain freshman Shawn Mcguire at 2:17.

“The kids wrestled awesome today,” Braves’ coach Jeff Brazeau said. “This is the first time Andrew Sargent reached the finals. This was huge for him. He went down from 145 to 140, which will work to his advantage.”

BR-H’s Drew Allgeyer (145) led off the championship round by pinning Iron Mountain sophomore Preston Roberts at 5:33.

“It was pretty cool winning the conference in my first year of high school wrestling,” Allgeyer said. “I put 10 years of hard work into this. It’s a great feeling to see it pay off. My takedowns were big. I’m still a little rusty, but I’m working on those every time. This is a big confidence boost going into districts.”

“I came in here feeling confident,” Berry said. “I felt I had a pretty good chance of winning it. Early takedowns really set the tone. It feels amazing to win this as a freshman. I think this will give me some confidence going into districts.”

Manistique senior Tony Williams got to the 130 final where he got pinned in 3:09 by Gwinn freshman Xander Luoma.

“Some of our kids are improving,” Manistique coach Mat Gonzalez said. “We have a young team. We did a little better than we anticipated. We’re telling the kids to hang their hats on something. This is the first tournament Jake has won. He keeps improving.”

Other area winners included Jaeger Wilson of Ishpeming at 119 pounds, who won by injury default in his championship match over Alana Nuorala of Westwood; and Leo Helppi of Negaunee at 189, who decisioned Jackson Vidlund of Westwood in his final. 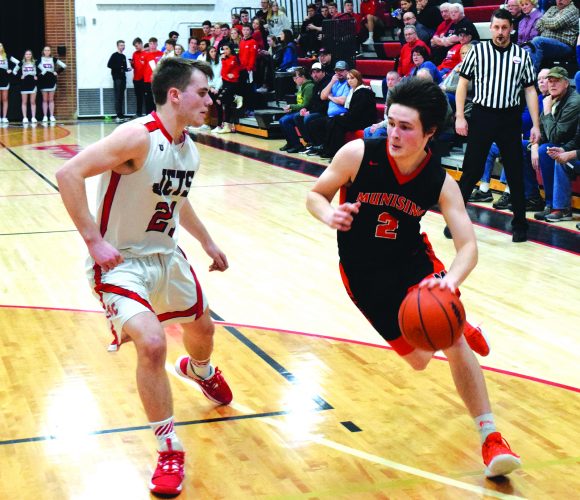 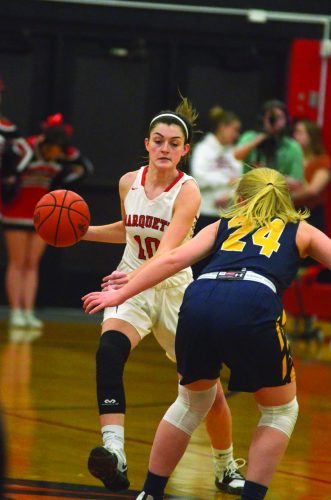