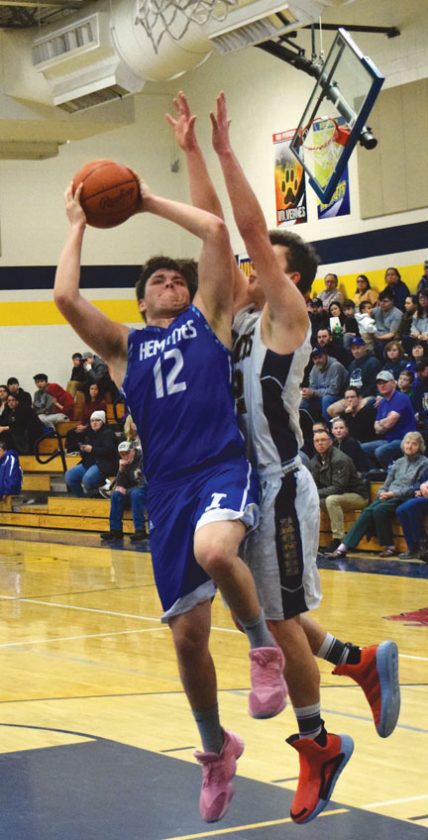 HARRIS — After an utter disaster in the early going, Ishpeming did a complete 180 in the second half, rallying from an 18-point deficit in the early going to overtake Bark River-Harris 67-56 in a nonconference high school boys basketball game played here Monday night.

Nick Javurek then tied it up for BR-H (6-7) with a jumper, but Ishpeming’s John Corkin hit back-to-back triples to give the Hematites a 45-39 advantage entering the fourth.

“I’m smiling from ear to ear,” Hematites coach George Niemi said. “John Corkin hit some monster shots, Otto Swanson gave us a nice electrifying jump off the bench and Jacob Kugler was just slow and steady and got the job done for us.”

The game looked nothing like this in the first quarter, with the Broncos taking a 23-5 lead entering period No. 2. The Hematites responded with a 9-0 run to begin the second.

“For that first quarter, I liked the way we came out,” Broncos coach Marc Zawacki said. “We have to look to carry that energy into the rest of the game. It’s not a one-quarter game, it’s four quarters … so I thought we came out great.”

Ishpeming’s first sign of life was indicative of how the rest of the game would play out.

“We were down by 18 at the end of the first quarter, but I told the guys that we weren’t going to focus on the negative — we were going to focus on what would get us back into the ball game,” Niemi said. “Once we got our legs underneath us and got our poise back, we were able to get some looks and get some shots to fall and move the basketball a bit.

The Broncos posted just 12 points in the second quarter but still went into halftime with a 35-29 lead.

“We got a little complacent in the second, and after halftime it kind of stuck around,” Zawacki said. “We dug ourselves a bit of a hole, and we couldn’t climb back out of it.

“We need to look at putting four quarters of basketball together. If we can put all four quarters together like that first quarter, that’s what our ultimate team goal is.”

Bark River’s struggles rolled over into third quarter, only scoring twice from Riley Bray and Javurek.

Corkin led the Hematites with 18 points and four triples, while Kugler followed with 14.

Bark River was led by Bray with 17 points as Carter Zawacki chipped in 11.

Ishpeming, which won the JV game 60-56, hosts Negaunee on Friday.