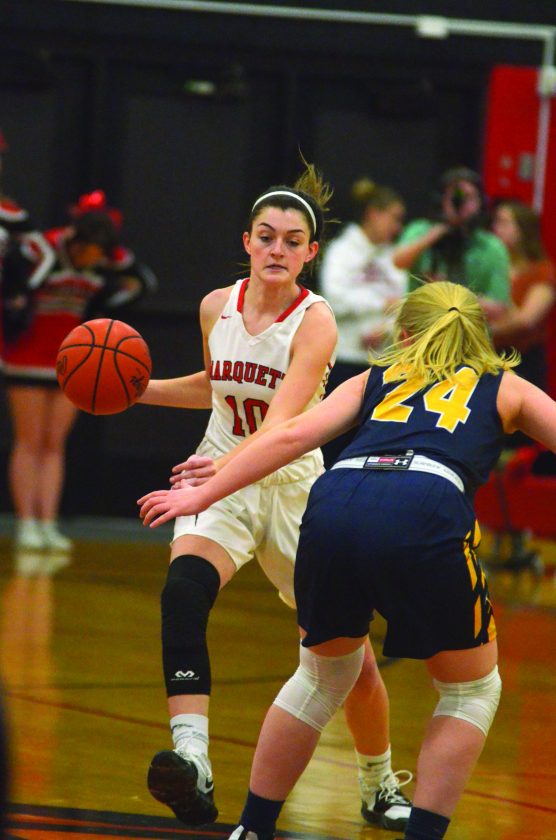 MARQUETTE — If you’re down five points with 20 seconds to play in overtime, your win probability is likely extremely low.

That was the situation the Marquette girls basketball team found itself in on Tuesday night against rival Negaunee.

But some way, somehow, the Redettes escaped the jaws of defeat on Senior Night, picking up a 75-72 overtime win thanks to a go-ahead layup off the glass from senior forward Sofia van den Ende with 3.7 seconds remaining on the clock.

Van den Ende earned the bucket and drew a foul after nabbing a steal to keep MSHS’ hopes alive. The layup gave the Redettes a 73-72 lead with a chance to go up two on the free throw attempt.

Van den Ende missed the free throw however, but there was no need to worry as sophomore teammate Maria Millado picked up the offensive rebound. Millado was fouled with 0.6 seconds remaining and hit both free throws to seal her team’s third consecutive win over the Miners.

Van den Ende was honored before the game alongside her three senior teammates in Reegan Ketzenberger, Aspen Michelin and Maddie Carter. It was only fitting for one of them to be the hero that gave the senior crop one last win inside MSHS’ Barb Crill Gymnasium.

“It was pretty exciting and definitely overwhelming,” she said. “I kind of knew once I was going up that it was going to go in. Once I made it and I was at the free throw line, I kind of got overwhelmed. It was my last time playing Negaunee, so it was very emotional.

Van den Ende added that it was by far one of, if not, the craziest games she’s ever played in. A game where the margin never exceeded five points.

The reason the game got to overtime in the first place was Negaunee senior guard Chloe Norman.

Norman shot the lights out for 32 points, earning numbers 28 and 29 on a drive and layup with just 0.8 seconds remaining in regulation to tie the game at 60.

“Chloe had one of her many buckets at the end of regulation there,” Marquette head coach Ben Smith said. “It was a great end to end play with about eight seconds to go. She split a double team, got to the rim and finished. She got to where she wanted to go. That was a really impressive all-around game from her on both ends of the floor.”

As for his own team, Smith said it was by far one of the wildest games he had ever been part of.

“It was definitely a crazy ending,” he said. “The girls dug in and played hard. We try to let them play and not over-coach, because sometimes I’ll call timeouts and try to do something, and that makes it harder to execute. We got a few pokeaways, jumped into some passing lanes and we were able to make some plays in certain situations at the end there.

“Sofia’s pokeaway, steal and layup was great. Maria also had one a couple of possessions earlier that kind of changed the dynamic and then we were kind of in that tweener zone where we missed that free throw and it was still a one point game.

“Maria got the rebound and got fouled with about a second left. She made the first (free throw) and should’ve tried to miss the second, but it’s really hard to try and miss. The fact that she made it, (Negaunee) could’ve tied it with a heave and if you miss it, they can win it with a heave. You’re kind of just hoping it goes your way.”

Negaunee junior forward Morgan Carlson was the one to throw up the Hail Mary ball after Millado’s free throws. It had the distance, but went wide right of the hoop allowing the Redettes to hang on for the victory.

It was Marquette’s fourth straight win of the season to improve to 13-6 with one game remaining on the regular season slate.

Meanwhile, it was Negaunee’s second overtime heartbreaker in a matter of two weeks, the first being a road defeat at currently-ranked No. 4 Calumet 59-55 on Feb. 11. The Miners were ranked No. 5 in this week’s UPSSA Divisions 1-3 girls basketball poll and finished off its regular season with a record of 14-6.

“It’s frustrating because we made all of the right plays in regulation to get the game tied at the buzzer,” NHS head coach Mike O’Donnell said. “We did everything right, we kept chipping away and we kept making the right plays. Then in overtime, we didn’t. We made a couple of costly mistakes there. I told the girls that it’s never one play. It’s an accumulation of four quarters, especially towards the end there.

“We did some other things throughout the game where we could’ve closed it out and we didn’t do it. It’s a learning experience. This close to March, we can say we competed and we left it on the floor. Let’s look at those mistakes and not make them again and hopefully, we’ll be better for it next week.”

“We really leaned on her, especially with Alyssa being in foul trouble,” he said. “She stepped up, whether it was jumpers or going to the hoop or pressure-type situations. She made a couple of clutch baskets including the one at the buzzer. She did it all (tonight). She defended Millado who was a handful on the other end.

“You tip your hat to her and she’s a really unselfish player. She’s had games where she’s been under 10 points and she never says anything. I think she really showed that she’s one of the premier players in the Upper Peninsula (tonight).”

Marquette went up 42-41 at the end of the third quarter, which is when the chaotic sprint to the finish line began.

The Redettes took the lead with 52 seconds remaining in the fourth on a long two-pointer from junior guard Kaleah Puskala which put hear team ahead 55-54.

It was mostly a free throw game from that point on, with MSHS sinking five of six from the stripe in the final minute. The missed shot came from Michelin with 7.6 seconds remaining, keeping it a two-point game and allowing Norman to go coast to coast for the game-tying layup.

An intentional foul from Puskala allowed Hill a chance at two free throws, both successful.

Van den Ende again had a quick two-pointer to make it a 72-69 game before Millado earned a steal and was fouled with 15 seconds remaining. Millado hit both free throws to make it 72-71.

Van den Ende grabbed her steal after that, which setup her game-winning shot with three seconds remaining.

Millado finished with 18 points to lead the Redettes with 12 of those coming at the line. Carter added 16 and van den Ende 12. Michelin, Puskala and junior center Averie Kelly each had eight apiece.

Marquette wraps its regular season campaign with a visit to No. 1 Menominee (19-0) on Friday. Negaunee’s next game will be in tournament play on Monday, hosting Gwinn (13-6) to open the MHSAA Division 3 district tournament. The Miners and Modeltowners split the regular season, with the latter picking up a 37-29 win on Feb. 18.