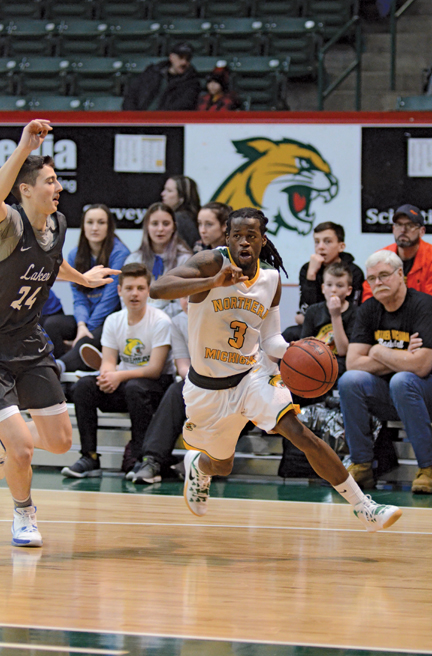 “I loved how everyone was so friendly and so willing to help you. Where I’m from, people really don’t do that.” — Sam Taylor, NMU men’s basketball senior guard,

Northern Michigan University’s Sam Taylor, left, gets fouled as he attempts a reverse layup in the second half of a GLIAC game played against Ferris State at the Berry Events Center in Marquette on Jan. 16. Defending for the Bulldogs is Logan Ryan and Walt Keiser, while trailing the play is the Wildcats’ Troy Summers. (Photo courtesy Daryl T. Jarvinen)

Northern Michigan University’s Sam Taylor makes a pass in a GLIAC game against Davenport on Saturday at the Berry Events Center in Marquette. (Journal photo by Corey Kelly)

on the transition from Chicago to Marquette

With his long dreadlocks, lockdown defensive skills and ability to make a clutch 3-pointer when the Wildcats men’s basketball team needs it, Taylor knows how to make a statement on the court.

He may be noticeable now, but when he was in high school, Taylor said he was overlooked by various colleges despite putting up some impressive stats, earning spots on the Chicago Sun-Times’ and Chicago Tribune’s all-area first teams and being ranked 40th by the Sun-Times. 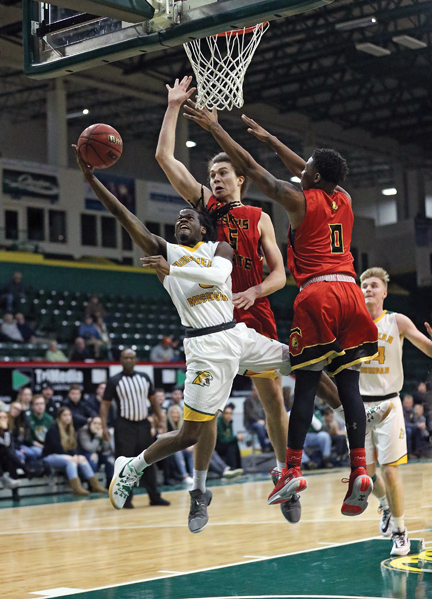 Northern Michigan University's Sam Taylor, left, gets fouled as he attempts a reverse layup in the second half of a GLIAC game played against Ferris State at the Berry Events Center in Marquette on Jan. 16. Defending for the Bulldogs is Logan Ryan and Walt Keiser, while trailing the play is the Wildcats' Troy Summers. (Photo courtesy Daryl T. Jarvinen)

“I was definitely overlooked,” he said with a sly smile. “At my high school, they didn’t really bring people up. I played every level. I played freshman year with the freshman squad, JV my sophomore year and played up my junior and senior year.

“So that probably had a lot to do with it. Then in AAU (Amateur Athletic Union), I was kind of overlooked. I played with UIBL basketball for AAU. That’s like for Nike basketball, but I didn’t really get a lot of playing time. That kind of played into it, too. Not to mention I was a two-sport athlete, too. So I missed a lot of AAU games to go to like 7-on-7 (football) competitions and stuff like that.

“I was being recruited by a lot of junior colleges, (NCAA) Division III’s and Lewis University actually offered me first. That was my first Division II offer, but it was only like 40 percent (of a scholarship). So I was like ‘No, I’m not going to do it.’

“Then (former NMU assistant) coach (Charles) Belt reached out to me and talked to me and ever since then, he got me in contact with (former NMU head) coach (Bill) Sall. 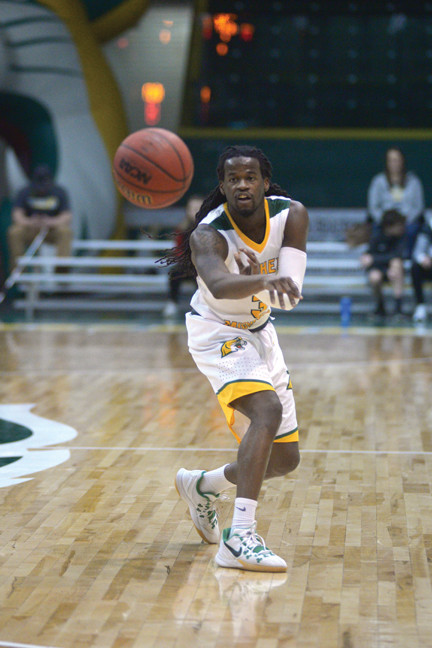 Northern Michigan University's Sam Taylor makes a pass in a GLIAC game against Davenport on Saturday at the Berry Events Center in Marquette. (Journal photo by Corey Kelly)

“And Coach Sall called me probably about two days after that and we talked about an hour and he offered me a full ride. That was probably the greatest day of my life.”

Coming from Chicago to a small town like Marquette can be a big adjustment, but it didn’t take long for Taylor to fall in love with the area and the brotherhood that developed with his new team.

“It was different,” he said. “It’s beautiful and it’s definitely quiet. On my visit, there wasn’t really anybody here. So I just saw the campus and the facilities. But when I actually got here, it was kind of a culture shock.

“Everything is different, but I loved how everyone was so friendly and so willing to help you. Where I’m from, people really don’t do that. They hate on you instead of helping you. So it was something I had to get used to, but it was also something I loved to be around.”

When Taylor arrived, he joined Naba Echols, Isaiah Johnson and fellow Chicagoan Myles Howard in a Wildcats’ program that started to rise after being at the bottom of the GLIAC for years.

In Taylor’s sophomore year, NMU had its first winning season and earned its first GLIAC Tournament bid since the 2006-07 season. Taylor was named to the All-GLIAC Defensive Team for the first time and then the Wildcats performed even better his junior year, getting a GLIAC tourney win, while Taylor notched another All-Defensive Team honor.

Things changed this year as Echols and Johnson graduated, so the Wildcats lost a good chunk of their offensive firepower. Not only that, but both Belt and Sall left for different jobs with Belt taking the head coaching job at William Woods (Missouri) and Sall heading downstate to his alma mater, Calvin College.

Matt Majkrzak was picked to be the new head coach during the off-season and while some players might resist wanting to play for a new coach and a new system, Taylor embraced this era and said it came down to one thing.

“My brothers,” he said. “My teammates. I had built so much stuff and built some relationships with these guys and Marquette became my home. It was hard to just throw all that away.

“There were thoughts. New coach, new change. People don’t know but Ferris (State) reached out to me and Myles. Ferris, they’ve got a winning culture, but when it came down to it, I just couldn’t do it.

That’s a good thing for the Wildcats as Taylor is clearly one of the best defensive players in the conference and he said that defense helps his offense.

“Where I’m from, that’s all our coaches preached,” he said. “Since I was probably (in) like seventh grade. Defense leads to offense. That’s all I knew.

“That’s how my game is. It just feeds off each other, offensively and defensively.”

He may be known for his defense, his passion and his leadership, but truthfully, Taylor’s dreadlocks are his most recognizable feature and it’s something he takes pride in.

“It’s like my identity,” he said. “It’s like my power. I had an interview where I was on a radio show and he was like ‘What is your trademark?’ or something like that and I feel like my dreads and my arm sleeves are my superpowers.”