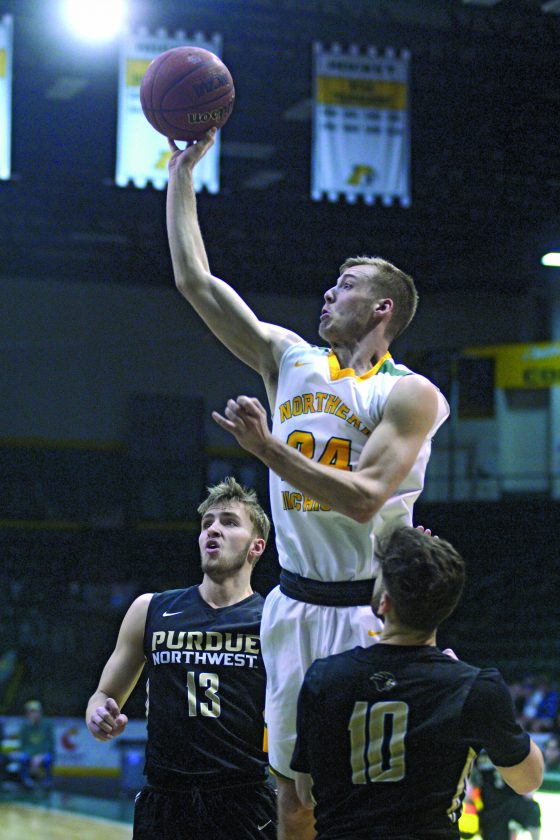 MARQUETTE — There’s no doubt about it at this point. It’s crunch time for the Northern Michigan University men’s basketball team.

After their losing streak was extended to three games with road losses to Lake Superior State and Ferris State, the Wildcats’ chances of making the GLIAC Tournament are still good, but far from ideal. Although those two defeats may appear to be discouraging, NMU head coach Matt Majkrzak is looking at them in a more positive light.

“I think (against) Ferris, we played pretty well,” he said Tuesday. “It kind of continues that trend where we play one of the best teams, especially on the road, we seem to be playing right now as well as anyone in the conference. So that was a positive. Obviously, it’s frustrating to lose close games, regardless of how it goes, but overall, that one feels fairly positive. The Lake State game, we didn’t play very well at all the second half. I thought we played okay the first half, but they played out of their minds in a lot of ways.”

NMU (11-14, 8-9 GLIAC) has to regroup quickly as two of the best teams in the conference are coming to Marquette this week in Grand Valley State (20-5, 13-4) and Davenport (19-8, 11-6). That may seem like an intimidating task, but the Wildcats beat both teams on the road earlier this season, so they’ve shown they can keep up with both the Lakers and Panthers.

“On the road, we’ve done our job and (we’re) probably the fourth or fifth best team in the league (on the road),” Majkrzak said. “And at home, we’ve probably been the 11th or 12th. So now we end the year with three of the best teams coming to our home and if we can flip that trend, we’ll make the conference tournament and we’ll put ourselves in a spot where we’re going to have another chance to win a game. If we don’t, we won’t. In some ways, if we don’t finish the year out well at home, we probably don’t deserve to make the conference tournament. In a lot of ways, I think it’s kind of an exciting test. We know we’re playing great teams and we’re know we’re playing them at home. We’ve beaten all three of the teams we have left on the road and we now have to be able to carry that over and play well at home.”

Majkrzak said that the Wildcats are well aware of the situation they’re in as they’re currently tied for seventh with Saginaw Valley State and LSSU, but they’re only one game behind Ashland and Northwood. So there’s a chance NMU could earn a higher seed.

“This week, we talked about it, like in a lot of ways, it’s a three-game season,” he said. “Everything that’s happened up to this point has led to where we’re now in playoff mode. The playoffs for us right now is a three-game season. If we go 2-1, we’re in, barring some crazy, crazy stuff, 2-1 we should make it. 1-2, we’re going to be right on the cusp and then 0-3, we’re out. It’s one game at a time still, but it also is kind of that three-game season. We’ve done enough good stuff to put ourselves in that position and we’ve done enough bad stuff to put ourselves in that position. All of that is kind of out the window. It’s literally about just trying to find ways to get a win one at a time.

“We almost want to reset on kind of where we’re at and realize I don’t hate how we’re playing right now. Even though we haven’t won as much. We got a lot better last weekend, it’s the first time we’ve improved in probably about a month. The results weren’t there, but I saw us getting better again. So that was really positive to see. So it’s kind of like, let’s reset it and let’s reframe it in the context of we have a shot and one game at a time. But none of that matters. The last weekend is out the window other than as far as learning goes because we now are kind of in this unique position where we still do control our own fate. It’s not like we’re needing any help to make the playoffs. We just need to handle it and find ways to win.”