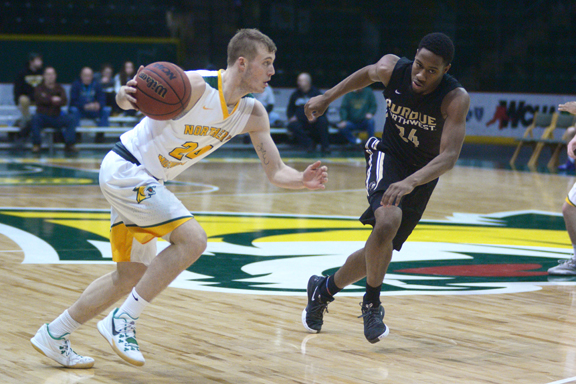 MARQUETTE — Normally, one of the offensive strengths for the Northern Michigan University men are their inside game, but Saturday afternoon, that turned out to be this Wildcat basketball team’s biggest weakness.

NMU shot a frigid 21 percent from 2-point range on 9-of-42 shooting and that combined with a tough second half helped lead to Northern’s 65-62 overtime loss at home to Purdue Northwest.

“When you look at the sheet, it’s hard to find a lot of flaws in a lot of the stuff,” NMU head coach Matt Majkrzak said. “We get 22 offensive rebounds, we only turn it over seven times against heavy pressure. We go 11 of 32 from 3(-pointers), which obviously is pretty good.

“And 9 of 42 from 2. I don’t think I’ve ever seen that in a basketball game and if you do see it, it’s usually because the other team has elite rim protection and big guys inside to bother your shots.

“They had 6-foot-4 centers playing and we still went 9 of 42 for 2. And we got to the rim. It wasn’t like we were settling for a lot of mid-range jump shots.

“We kind of played how I wanted us to play and obviously, when you go back, there’s going to be a lot of things that I wish we would’ve done differently, like any other game.

“But for the most part, my initial reaction is we actually played OK. We just have to finish.”

Despite the loss, Northern remained in third place in the GLIAC North Division, but is now two games behind Michigan Tech and tied for seventh with Northwood in the overall standings. Eight teams will make the league playoffs at the end of the regular season.

“Obviously, when it comes to season implications, this loss is going to sting really bad,” Majkrzak said. “The flip side of that is, my initial reaction is, I’m probably not even as disappointed as I was against Saginaw (Valley State) because the way I kind of look at our team is did we do what we needed to do.

“I think that’s just the nature of not having those consistent scorers. The balance is great when everybody is balanced scoring, but when nobody is scoring, you don’t have that obvious guy to step up. That’s been kind of the challenge this year.

“I think that’s why some of our bad shooting performances can spiral maybe more than other teams can because I don’t know if we have that one guy to rely on and (the injured) Troy (Summers) was probably the most dependable because he scored around the rim.

“So without him, we kind of are dependent on guys making some tough plays and when we don’t make them, it’s tough.”

Taylor rallied the Wildcats, though. He made two free throws with 17.8 seconds left to cut it to two at 58-56, and with six seconds remaining he put in a layup to tie it 58-58.

PNW had a chance with win it at the end down low, but Myles Howard blocked that attempt to send the game to OT.

In the extra session, Taylor did his best to keep Northern’s momentum going. He tied the game on a layup at 60-60 with a little more than a minute left and after a three-point play from Chandler Spring, NMU’s senior guard dropped in a floater to get the Wildcats within one at 63-62.

However, a costly goaltending call on the Wildcats with 24 seconds remaining pushed PNW’s lead to three at 65-62 and a desperation 3-point attempt by Northern rimmed out at the buzzer.

The first half started amazingly for NMU as back-to-back 3-pointers from Olayinka and Alec Fruin forced PNW to call a timeout within the first minute. With 13:15 left, a Kuehl triple put Northern up by double digits at 18-8 and he followed that with another trey with 11:39 remaining.

With a little more than 10 minutes left in the opening half, Kuehl knocked down another 3-pointer to give NMU its biggest lead, 26-10.

But PNW didn’t go away quietly. The Pride tried to live up to their name by slowly cutting into the Wildcats’ lead. A Spring triple with 3:26 left got PNW within five at 31-26. However, Taylor ended that surge with a trey of his own to put NMU back up eight.

After Durante Lee made two free throws for the Pride, Taylor hit a jumper with 1:19 left to make the score 36-28 at the half.

Majkrzak praised Kuehl, who showed that he could be a key offensive weapon for the Wildcats as they try to earn a GLIAC tournament bid.

“He’s probably been our best player in practice for about three weeks now,” Majkrzak said. “Just because he is behind all those older guards, we haven’t been able to play him as much as I’ve wanted to play him.

“He’s kind of that typical freshman that’s just getting better and the light’s starting to come on for him. I knew he’d do this at some point, it was just kind of a question of when.

“It was good to see that. That definitely is the bright spot out of tonight, him making all those shots. He’s actually really good at attacking down the middle of the rim and (he) got a little frustrated he missed the dunk, but I think as he starts finding his way, he’s going to give us, hopefully, down the stretch, just another option that we haven’t had. Especially scoring inside, which we clearly need.”