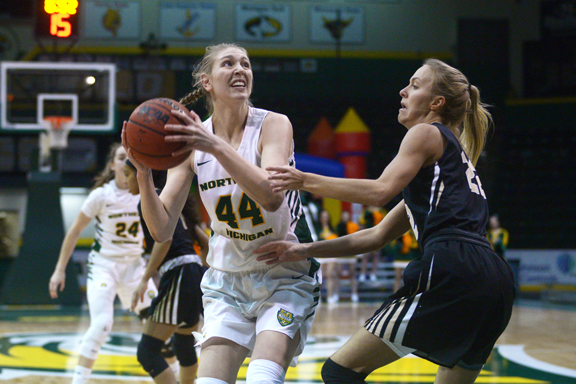 “She knows she has to take over.” — Troy Mattson, NMU women’s basketball head coach, on Jessica chultz stepping up her scoring due to the Wildcats’ injuries

MARQUETTE — Northern Michigan University senior Jessica Schultz has had an impressive career and on Saturday afternoon, she had arguably her best game ever for the Wildcats.

Schultz scored a career-high 36 points as she almost single-handedly carried NMU to a 57-53 win over Purdue Northwest. Despite that strong performance, she remained modest in the postgame press conference.

“I’m just reading the game,” Schultz said. “I shoot that little hook shot a lot. I worked on that all summer and it’s really working for me right now.

“It’s really hard to defend, but then when I see the doubles (double teams), I try as much as I can to kick it out to the shooters.

Northern head coach Troy Mattson had a lot of praise for Schultz, who was named GLIAC North Player of the Week last Monday.

“She’s been playing great for over a month, probably about six weeks,” he said. “I can’t say enough about her. She’s put in a lot of time over the years, making herself a better basketball player. She listens, she learns. She’s a great person and she deserves this.

“She’s brought it up on herself and she knows that we need her right now with people being hurt and out. A lot of our scoring punch (is) out of the mix here and she knows she has to take over. And she’s been taking over and playing great.”

The win moves NMU into second place in the league’s North Division and just one game out of first place shared by Ferris State and Wisconsin-Parkside.

The Wildcats closed out the quarter on a good note as Mueller beat the buzzer with a trey to cut the Pride’s lead at 13-11 going into the second.

PNW got its lead up to seven at 18-11 with a bucket by Danielle Nennig, but the combined efforts of Schultz and Lutz helped the Wildcats rally and take a 22-18 lead. After Nennig sank two free throws and Bayley Goodman made a 3-pointer with 2:26 left, NMU got a basket from Makaylee Kuhn on a feed from Elena Alaix to close out the half with a 24-23 advantage.

The score continued to seesaw in the third quarter. A triple from Alaix put Northern up 29-25, but PNW tied it on two shots by Savaya Brockington. After former Marquette Redette Amber Huebner knocked down a trey, the Pride got a triple from Anjel Galbraith to make it 32-32. Back-to-back baskets by Schultz put NMU up 42-40 with 1:33 left in the third, but a 3-pointer from Nennig gave the Pride a 43-42 advantage headed to the fourth.

“They (the Pride) made shots,” Mattson said. “They have struggled to make shots from other people outside of Brockington and Galbraith. I tell you what, those two freshman point guards, they’re a load.

“Brockington is special. She’s 5-foot-2 and she’s pretty much unstoppable. We went to double-teaming her and then it just opens up other people, but we had to stop her. She was carrying them.

“They’re playing good. Two weeks ago, they went down to Ferris and went to overtime with them. They’ve been in every single game for the last month and their freshmen are figuring it out.

“Their 3s and 4s and 5s are making shots and … you do that and you’ve got a special player like Brockington. And Galbraith is a really good player, too. Those two freshmen are really good.

But NMU first went ahead then started to pull away early in the fourth quarter. Northern outscored the visitors 9-2 over the first six minutes of the period to go ahead 51-45. With a minute left, Kuhn dropped in a tough layup to make it 55-50. Two free throws from Huebner with 11 seconds left nailed down the win.

“When you win games, you just take them,” Mattson said. “Nothing is going to be easy for us. We lack so much other offensive potential not playing for us right now. So it puts pressure on a lot of people to step up.

“Elena made a huge 3 to start the half when Jessica hit her. Amber made a huge 3 out of the corner. Liz has been making 3s, she had a tough second half, but those people need to, when the teams start to focus on Jess and start bringing a lot of people, they’ve just got to make shots around her. And then it’s really hard for people to guard us.

“In the second half, we made some plays. I thought Makaylee had two huge plays. The drive right off of Jessica’s ball screen and then a drive left where she should’ve got the and-one, but missed the free throw.

“Having her back (after) missing her for three or four games, that’s like eight, 10 points that we can’t afford to lose. She came up big and made some huge plays and the other thing about Makaylee is she’s a really good rebounder. She pulled (in) the last rebound where we had been struggling rebounding, too.

“She’s a really good rebounder, and on Thursday I hope we get Erin (Honkala) back as she’s probably our most aggressive rebounder.