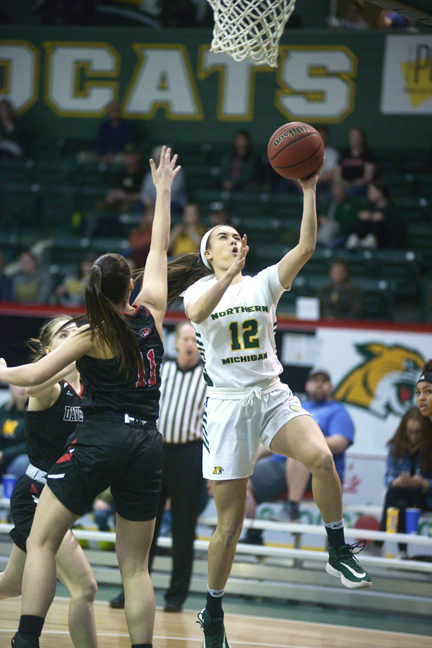 “We really emphasized the little things that everyone could contribute from … starters to the bench.” — Amber Huebner, junior guard, NMU women’s basketball

MARQUETTE — For the ninth straight season, Northern Michigan University will be in the GLIAC Tournament in women’s basketball.

The Wildcats clinched their postseason bid Saturday afternoon with a 72-63 win over Davenport. And with that victory, NMU kept its chances alive at hosting a first-round GLIAC quarterfinal game as it is currently just one game behind Wisconsin-Parkside for the fourth and final hosting seed.

“I thought we were doing the right things on the defensive end, and Davenport, they were just hurting us in certain areas,” Northern head coach Troy Mattson said. “They made plays and made shots to keep the game close the whole night long.

“I knew we could score on them and we did a pretty decent job of finishing plays ourselves.

“I’ve got to give Davenport a lot of credit. The first time we played them, we pretty much snuffed them out, and this time they made plays.”

Huebner said it took a team effort and everybody needed to step up to beat the Panthers and keep its tournament streak alive despite a rash of injuries the team has had to endure.

“I think it just took a lot of energy and a good solid team effort from everyone,” she said. “We really emphasized the little things that everyone could contribute from … starters to the bench.”

Mattson agreed with his junior guard’s assessment and credited Huebner for being part of that strong supporting cast for key post players like Schultz and Erin Honkala.

“That’s the biggest thing for us is other people,” he said. “Outside of Jessica and Erin, who is going to get it done?

“I thought Elena (Alaix) made some plays for us and Andrea (Perez) is starting to make a couple plays for us.

“Makaylee had a big weekend again. She made double digits both nights. She’s getting the job done for us.

“In order for us to beat somebody really good, we’re gonna have to have everybody step up and do a little bit more.”

In the first quarter, back-to-back treys from Kuhn put NMU up 12-7 with 5:28 left, but the Panthers (7-20, 2-17) got within one on a steal and layup from Madison Jones. Up three with 28 seconds remaining, Perez made it 21-16 Northern and Huebner beat the buzzer with a driving layup to put the Wildcats up 23-16 going into the second.

NMU got its biggest lead of the half at nine with 9:13 left in second with two free throws from Huebner, but DU fought to get back in it.

In the third quarter, the Wildcats started to pull away. A layup from Huebner put NMU up by nine and two free throws from Schultz made it double digits at 44-33 with 3:52 left. Following a DU triple from Toni Grace, Huebner nailed a trey of her own to get the ‘Cats back up by 11 with 3:14 remaining. NMU led 52-43 going into the fourth.

The Wildcats had a fairly comfortable lead throughout the final quarter. Two free throws from Schultz with 6:57 left made it 58-48 Northern and Honkala followed that with a layup. The Panthers trimmed NMU’s lead to six with 1:46 left on a three-point play from Falkenberg, but that’s the closest they would get.

NMU closes out the regular season at home against Michigan Tech at 7:30 p.m. Thursday. Huebner said that the Wildcats are “feeling good” going into their game against the rival Huskies and that they’re aware of what is on the line this week.

“We emphasize that every game is important for us, but this is a really big game against them,” she said. “If we beat them, they may not even be in the tournament, so we want that.”

The Huskies are tied with Saginaw Valley State for seventh at 8-11 in the league, but ninth-place Northwood is just a game back as eight teams make the tourney.

NMU will almost certainly play Wisconsin-Parkside in the quarterfinals; the only question is who will host the game.